Dec 01, 2010Architects and urban planners often draw designs in two dimensions on a computer screen, then build models to see how their creations will look in three dimensions. Now, CEA-Leti—a research and development institute in Grenoble, France, that specializes in microelectronics and information and health-care technologies—has developed an interactive modeling tool that enables designers to work in 3-D and see their projects on screen in 3-D.

The modeling tool comprises a table with 960 high-frequency (HF) readers based on the ISO 15693 air-interface protocol standard, motion-capture technology and RFID-tagged objects, such as buildings, trees and lamp poles. Designers can even add textures, such as grass or pavement, with an RFID "brush." Information from the table is relayed to a CEA-Leti virtualization program, which displays the design in 3-D on screen. 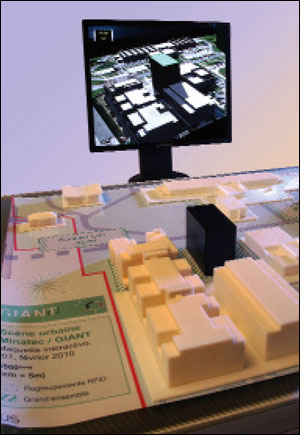 Information from the RFID-enabled table is relayed to a virtualization program, which displays the design in 3-D on screen.

The system is called Humanities, Innovation and Research in the service of Mediation Architecture (HIRAM), and it's the brainchild of Pierre-Damien Berger, head of the smart devices program at CEA-Leti, and Nicolas Geraud, a research engineer at the institute. Berger and Geraud consulted with architects and urban planners as they developed the system, and they incorporated their suggestions into the interactive platform.

"Our department is dedicated to innovative systems, so we are constantly investigating new human-to-machine interfaces," Berger says. "We were exploring ways to use RFID and other technologies to enable objects to be manipulated in the real world and have that reflected in the virtual world."

Each reader covers a 2.5-square-centimeter (0.4-square-inch) area on the table. When a tagged building, for example, is moved from one space to another, it is recorded by the reader and the information is relayed to the virtualization program that will render the building in 3-D on screen in the new location. RFID cannot detect if, say, the building is rotated clockwise within a space, so the researchers use motion-capture technology to reflect those changes.

A small camera can be moved around inside the model, giving architects a "human-height" view of the design. Another device lets them simulate the shadows of the buildings inside the model at different times of day.

A startup company associated with the institute intends to commercialize the technology for professional use. "Several architects and urban planners we worked with have tested it and feel the tool is sophisticated enough to be sold as a commercial product," Berger says.

The research team plans to add new elements to the interactive modeling tool over the next two years. "We have a roadmap with new features that will be added every two months or so," Geraud says. The two researchers say the 3-D tool is only the beginning—RFID has opened new possibilities for architects and planners to explore. "This could be the first chapter in a longer story," Berger states.