Within the next few months, users of the company's 3.5 million plant trolleys will begin receiving custom-designed passive tags that lock onto each cart, with the goal of improving inventory control and reducing shrinkage and counterfeiting.

May 27, 2010Less than six months from now, according to horticulture logistics supplier Container Centralen, all 3.5 million of its plant trolleys (or CC Containers) in Europe will be fitted with EPC Gen 2 RFID tags, as part of an effort to better control the company's inventory and reduce shrinkage and counterfeiting.

Container Centralen owns a variety of metal trolleys fitted with shelves and used by its customers—members of the horticultural supply chain—to transport plants. The firm is contractually bound to make the carts available, and to keep them in a good shape. Yet it battles counterfeits, has no information about the flow of its trolleys, and must add 150,000 trolleys annually to its pool to replace those missing or stolen. 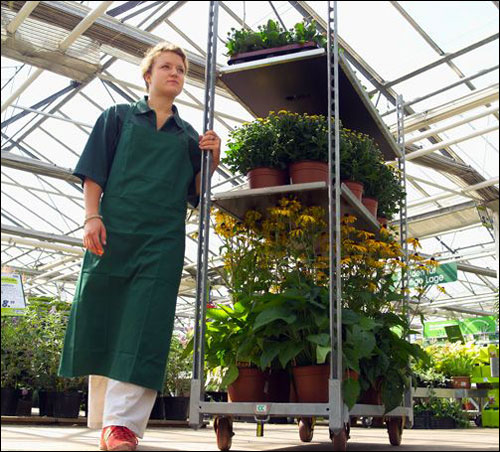 Container Centralen's 3.5 million trolleys come in a variety of sizes, and are used throughout Europe's horticultural supply chain.

The company currently authenticates the carts visually, by means of a black padlock that attaches to the trolley, along with a metal plate engraved with a serial number identifying it as Container Centralen's property. A bar-coded label is also affixed to the padlock, but the firm does not use the bar code, and never installed bar-code scanners at its facilities, as it discovered bar codes easily get dirty and become unreadable due to the working environment. What's more, the bar-code labels are often exposed to damaging outdoor weather year-round.

The RFID project has been in development for almost six years, as Container Centralen conducted tests and trials, sizing up the task of implementing the technology to track such a large pool of returnable assets. At an early stage of the project, the company formed a partnership with major institutions in the flower industry to implement RFID. They are FloraHolland, an auction business in Holland, at which some Container Centralen trolleys are used; Landgard, a leading German horticultural firm; GASA Group, a flower auction company in Denmark; and VGB, a Dutch association of flower and pot plant wholesalers, which owns 50 percent of Container Centralen (Danish flower exporters own the remaining 50 percent).

The project's Web site notes that the partnering companies are all interested in implementing RFID in the horticulture industry. Indeed, according to Soren M. Sorensen, Container Centralen's COO, each company has an interest in ensuring a high-quality pool of CC Containers, as well as capturing the benefits and cost-savings that RFID offers, such as ease of tracking and better information regarding supply levels and availability.

Container Centralen then hired IBM to design and implement hardware, software and processes for the system. "We saw that the project was too large for us to do on our own, so we submitted a tender," Sorensen explains. Container Centralen is investing more than 100 million Danish kroner ($16.6 million) in the RFID project, including tags, readers and services.


The company is using a custom-designed tag from Confidex that complies with the EPC Gen 2 standards. To tackle the massive tagging job, Container Centralen is asking each of its customers to attach a tag to every CC Container located at its own facilities. The firm has more than 20,000 customers in 35 European countries, and will ship a set of tags to each one, along with installation instructions. The Confidex EPC Gen 2 tags are embedded in a housing that includes a hook, much like a padlock. The hook on the housing will be locked around a ring on the trolley's base, between two wheels, and the RFID padlock will be visible alongside the non-RFID version currently attached to the ring.

The company is trying to keep the color and design of the housing under wraps for as long as possible, Sorensen says, to avoid giving potential counterfeiters a head start on creating look-alike versions without RFID chips inside. Counterfeit trolleys, fitted with phony padlocks, are a big problem for Container Centralen. 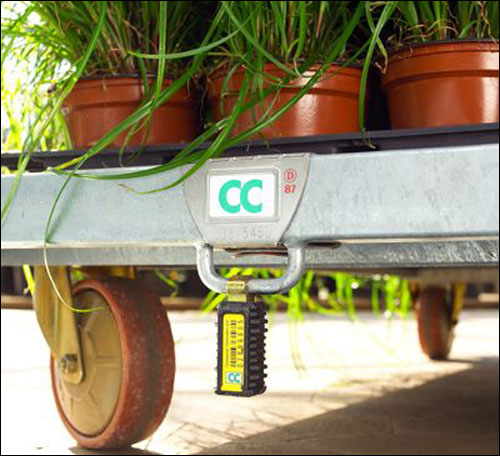 By Nov. 1, every CC Container should be fitted with a specially designed passive UHF RFID tag, attached next to the black identification padlock (shown above) currently in use.

"Some companies in the flower industry try to enter cheaper copies of our trolleys into the flow of goods, but they often break down, which can create a big mess and cause a traffic jam in the supply chain," Sorensen states. "RFID is the perfect protection for those who scan the tags. If you do not scan, you risk receiving counterfeit trolleys that cannot be passed on in the system. However, there will be some companies that choose not to scan—at least in the beginning."

Even if a counterfeiter re-creates the tag's housing, the trolley will be rejected at the doors of any facility that has a handheld RFID interrogator (scanner), because a failed reading will result. If a counterfeiter were particularly enterprising and actually inserted an RFID tag within the housing, that tag's ID number would still be rejected at its customers' and partners' facilities, because Container Centralen is encrypting its tags for greater security. Sorensen declines to provide details regarding that encryption, however.

"We believe our tags cannot be copied," Sorensen says. "They're more secure than transferring money from bank to bank."


Sorensen is confident that his customers will follow through and tag the CC Containers as requested. Over the years, Container Centralen has asked its clients several times to switch out a trolley's identification label with a new one. In any case, if a client fails to tag a CC Container, it will be unable to exchange that trolley for another that is properly tagged, because those companies that have properly tagged trolleys will be unwilling to accept one that is non-tagged. (To simplify logistics, it is common practice for one party to exchange a trolley filled with potted plants or flowers for an empty trolley, or vice versa.)

Once the RFID system is implemented and goes into use on Nov. 1, Container Centralen recommends that all of its customers use a handheld RFID interrogator to read the tags on the trolleys before making a swap.

Besides fighting counterfeiting, the RFID tags will enable Container Centralen to track the flow of trolleys as they move from one of the firm's facilities to another. According to Sorensen, the project also lays the groundwork for tracking plants and flowers from grower to retailer, if users decide to set up integration software in their own computer systems.

Most of the tags will be mailed to Container Centralen's customers by express mail in October, approximately two weeks before the Nov. 1 tagging deadline. For larger customers that need to tag several hundred thousand CC Containers, the company intends to deliver the tags earlier—in late September or early October—and make special arrangements.

Container Centralen strongly recommends that each of its customers purchase at least one RFID interrogator to take advantage of the tags' potential benefits, such as quick identification and assurance of a trolley's authenticity. The company has suggested handheld devices from Panmobil and Nordic ID, costing €400 to €1,123 apiece, or more. Handhelds are more flexible for horticultural processes than fixed readers, Sorensen says, since they're mobile. The company has tested the scanners' computer functionality at its facilities, and has carried out lab and field tests.


All 55 of Container Centralen's depots will be outfitted with Nordic ID PL3000 handheld readers (the company is purchasing 200), which will be linked to CC's logistic system. (It has also installed two RFID gates in Holland, for demonstration purposes only.) The company will utilize the handheld readers to identify every CC Container that enters or leaves a CC depot or repair shop.

Sorensen says his company cannot force customers to buy RFID readers, and it does not know how many clients will opt not to purchase. However, he notes, FloraHolland and the other project partners do plan to buy and use the devices, rejecting any trolleys that lack the new RFID tag.

The tagging deadline had originally been set for February 2010, Sorensen says, but customers were worried they would be too busy before the peak season in the spring, and so they requested a deferral until November. This gives them additional time to acquire readers, perform tagging, provide training to employees and consider how their own internal processes will change with the use of RFID, since identification was previously accomplished only visually, whereas now the cart tags must be interrogated. In addition, some companies may choose to use data about the carts in their possession for improving their internal logistical processes.

With RFID, the horticultural industry will have a platform in place that can facilitate track and trace processes, automate ordering and reduce the amount of paperwork. Container Centralen has set up a Web site, Operation Chip It, to inform its customers about the project, as well as the possibilities that RFID offers to various members of the supply chain.