Dec 03, 2010Bill Nye, a scientist and engineer based in the Los Angeles area, is widely known as Bill Nye the Science Guy, thanks to the television series by that name that aired from 1993 until 1998. Nye has hosted a number of other TV shows about science, and penned several books. But now he has an additional moniker: Bill Nye the Climate Guy. That's because his most recent venture is as the virtual host of a new RFID-enabled exhibition about climate change at the Chabot Space & Science Center, located in Oakland, Calif.

Geared toward children, the Bill Nye's Climate Lab strives to educate visitors about the most pressing environmental problems, and employs radio frequency identification to help it achieve that goal. The lab's 12 RFID-enabled exhibits, which convey to visitors the basic science of climate change, identify two of the largest sources of greenhouse-gas emissions (transportation and buildings), as well as promising technologies being implemented to combat climate change. Some exhibits require visitors to move handles or pumps in order to see how systems work, whereas others ask them to respond to polls or quizzes, and still others are only informative. 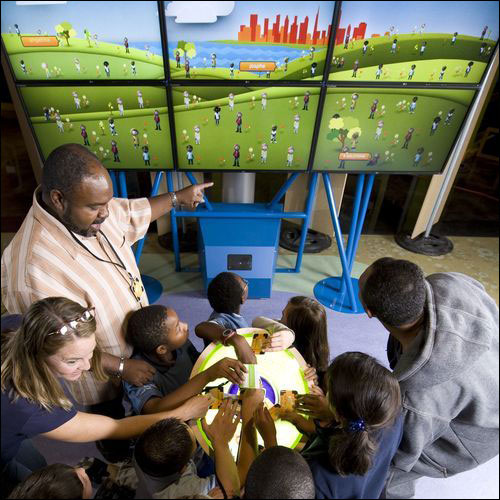 At the exhibition's Seeds of Change station, visitors place their badges on an RFID reader to see how many solutions they've collected. (Photo courtesy of Chabot Space & Science Center)

Upon entering the Climate Lab, each visitor is handed a Climate Scout ID card composed of cardboard (roughly the size of a business card) and containing an embedded Alien Technology ALN-9662 "Short" EPC Gen 2 inlay, made with Alien's Higgs-3 chip. Printed on the card's back side is a 16-character ID number that is also encoded to the tag. The card, adorned with the image of a briefcase, is attached to a lanyard, to be worn around the visitor's neck.

The goal is to virtually fill the card's briefcase with solutions, by visiting and interacting with all of the individual exhibits. An RFID reader embedded in each exhibit collects the unique ID from an approaching visitor's card, and forwards that number to middleware that filters out duplicate tag reads, based on a set of process logic rules, and also controls the interrogators. The cleaned data is then forwarded to software developed specifically for the exhibit by Longwave Consulting Partners, based in Mount Pleasant, S.C.

In the Longwave software, the visitor's profile is formed automatically as soon as the tag is read at any of the Climate Lab's exhibits. In some cases, an exhibit will require the individual to physically interact with it before it will award the solution associated with that particular exhibit, while others require only that the tag be read for a predetermined numbers of seconds. In either scenario, he or she earns the solution associated with that exhibit. Most solutions provide the visitor with 1,000 points, though there are ways to acquire extra points at some exhibits. Once the visitor earns a solution, it is added to that person's profile in the Longwave software.

"We didn't want the kids to game it, so there is the assumption that they spend some time doing something and, therefore, deserve the solution," says Mark Samber, a principal at Longwave. So if two visitors are standing in front of an exhibit that requires interaction, the reader will pick up both of their tags and award points to both of them for having found the solution, even though only one person operated the handle. One example of such an exhibit is a model of a power generator that creates electricity from the motion of ocean waves. The exhibit depends on a visitor pulling a handle repeatedly in order to generate a wave that, in turn, rotates a turbine that eventually powers a small light. Other exhibits, however, associate any interaction directly to a single visitor. For example, there are computer kiosks at which visitors are asked to take a poll or a quiz. Because a kiosk's RFID interrogator might read more than one tag within its vicinity, the user must click on his or her Climate Scout ID number, which is displayed on the kiosk's computer screen (along with any other tag IDs it detects at that moment) before that individual can begin the quiz or poll.


A bank of computers, each with its own reader, is available to visitors who want to create a personalized avatar for their profiles. In the center of the exhibition, a wall of LCD video monitors, known as Seeds of Change, displays a green, hilly pasture. A reader is embedded in a podium in front of the video wall, and visitors can hold their Climate Scout IDs in front of the device in order to find out how many solutions they have collected. Those who have set up an avatar will see its name and image appear on the video wall, along with the number of solutions compiled. Without an avatar, a visitor would see only a Climate Scout ID number, along with a generic image of a Climate Scout and the number of solutions associated with that ID.

The Climate Lab also exists outside the four walls of the Chabot Science Center. Visitors can log onto the Bill Nye's Climate Lab Web site and call up their profile by keying in the last four digits of their Climate IDs. 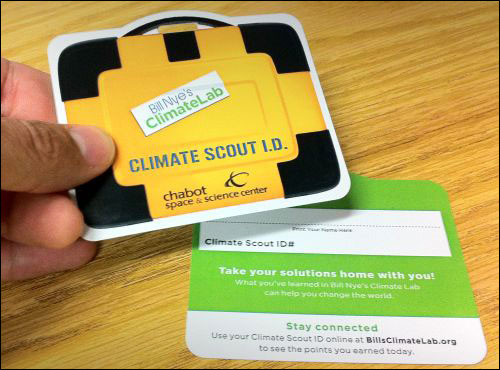 "The Web site was developed, partly, to provide a way to extend the game-playing element of the Climate Lab," explains Tamara Schwarz, the Chabot Space and Science Center's exhibitions manager. "The game element of Climate Lab is a powerful motivator, and kids immediately get very excited that they can earn points while they're here." They can later log onto their Climate Lab Web site profile, and accrue even more points by answering questions or taking quizzes posted there. "With respect to the educational value, linking the exhibition and the Web site is a way to hopefully extend the one-time museum experience to something that lasts longer and gives kids the information that they can use in their day-to-day life."

To link the physical and virtual Climate Labs, Longwave worked with Proximity Lab, a Portsmouth, N.H., digital interactive design agency that Chabot contracted to help design the Web site and some of the physical exhibits, so that the software powering the site is linked into the database of profiles stored in the Longwave software. Chabot also hired Boston-based exhibit development firm Amaze Design to design, test and configure some of the exhibits within the Climate Lab's exhibition, and to develop their content.


If a visitor later returns to the Climate Lab exhibition at the Chabot Science Center—bringing the Climate Scout ID card provided during his or her initial visit—the Longwave software will recognize that person's RFID tag and bring up the same profile established on that prior visit and also called up on the Web site.

While designing the Climate Lab, Chabot's main objective was to find a technology that would allow visitors to seamlessly move between exhibits, while also providing the museum with a means of tracking each user's progress, and storing in a database the solutions that each individual has earned. The science center ultimately selected RFID over other automatic-identification technologies, such as bar-coded or magnetic-stripe cards, because it was the easiest for visitors to use. "Kids could have a hard time reading mag stripes, and bar-code scanners were ruled out because of safety concerns over children looking up into the laser," Samber explains. "There were initially some health concerns about using RFID, but we checked the ambient levels of RF in the exhibition room before and after readers were put in, and there is no place where the levels of RF were even close to the FDA's maximum exposure suggestions over a 15-minute period."

Schwarz notes that because the Climate Lab marks the first time RFID has been employed in a Chabot exhibit, there were some learning pains. "Figuring out how to meet the needs of technology, and defining the read zones and making that work with the exhibits themselves, was a challenge," she states. Some revisions were required on the exhibits so that the read zone could be properly calibrated, and so that interactions with the exhibits were well timed with the read events. "We had to consider the placement of the readers in relation to the interactive parts of the exhibit, and how the [data capture] would work with 15 different people milling around." Additionally, the designers had to spend a number of hours working with the Alien readers, in order to set the proper read range for each exhibit. "We were taking something that is made for boxes on pallets, and it's very different when you're dealing with people in a tight space, and kids flitting around like bees," Schwarz says in regard to the RFID hardware.

Ultimately, Schwarz says, the work paid off, and she is now considering using RFID in similar ways for future exhibits, as well. "With the Climate Lab," she explains, "the fact that there is this payoff, in the form of points, changes the way visitors are interacting. They are slowing down, they are paying attention to what they are doing and they are thinking about how they are supposed to complete the activity. In a lot of science-center exhibitions, you see kids running up to something, pushing a button and, if they don't immediately figure it out, running on to the next thing. With the rewards, people are more concerned with figuring things out."

Longwave hosts the main database of tag numbers and user profiles, and also tested and selected the RFID hardware used for the exhibition. Samber says notes that his firm, armed with the experiences Longwave has collected by developing the software architecture and RFID system design for the Climate Lab, now hopes to develop similar RFID-based solutions for other museums.