A project carried out with funding from a Netherlands government advisory board demonstrated whether the firm's RFID-enabled containers could provide greater security and visibility during air travel.

Sep 15, 2011More than a decade ago, Henk Hilders, the founder of a Dutch firm called Cargobox Europe, devised the Cargobox, which he describes as a more secure container for air shipping, designed to prevent tampering, and to withstand the type of abuse to which air cargo is often subjected from forklifts and other freight.

The Cargobox consists of collapsible composite parts that can be assembled into a 122-centimeter by 104-centimeter by 160-centimeter (48-inch by 41-inch by 63-inch) container with a "lockbar"—an electro-mechanical lock that includes an active RFID tag, as well as GPS and GRPS technologies, and can be accessed only if the proper PIN is entered into its keypad. The Cargobox comes with an accelerometer, as well as air-pressure and electromagnetic field sensors, to detect a variety of conditions, including when a lock is being tampered with, when the container has entered an airplane and when it is in motion. The tag, manufactured by Identec Solutions, transmits at 433 MHz and complies with the ISO 18000-7 standard. 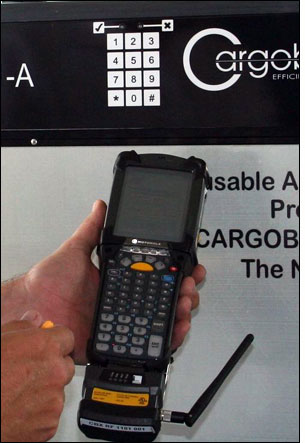 The Cargobox features an electro-mechanical lock that includes an Identec Solutions 433 MHz active RFID tag and a keypad.

Last month, a dozen Cargoboxes underwent three weeks of testing at Amsterdam Airport Schiphol, while passing to and from Hong Kong. The purpose of the tests, Hilders says, was to demonstrate to a governmental commission the Cargobox's ability to store and transmit data regarding its transport, as well as prove that it is stronger than cardboard containers, and thus more secure. The Dutch government's Ministry of Transport, Public Works and Water Management and Ministry of Economic Affairs, Agriculture and Innovation, in association with regional and city agencies, as well as the Schiphol Airport and the Port of Rotterdam, created a commission to study how air and ocean cargo transport might be made more efficient and secure, thereby improving Amsterdam's and Rotterdam's positions as main ports for the Netherlands and Western Europe. The advisory board, known as the Van Laarhoven Commission, considered various innovative ideas with respect to meeting that goal. One area of the study examined methods for improving efficiency and streamlining cargo-handling processes. The group approved funding for the project before disbanding in 2009.

Two years later, the trial was underway at the airport, consisting of shipping air cargo in Cargobox Europe's containers, and then reading data about those containers via RFID. An unnamed logistics service provider packed 12 Cargobox containers with a variety of cargo, including electronics, as well as personal and household goods. The test was intended to demonstrate whether the containers could be employed to improve the security and visibility of shipping freight by air. The 12 boxes were loaded with freight and shipped on a Boeing 747-400F all-cargo freighter, between Hong Kong and Amsterdam, three flights a week.

As part of this test, Hilders says, Cargobox Europe also provided software based on the Electronic Product Code Information Services (EPCIS) standard, in order to manage RFID data about the container's location, sensor data regarding the box's condition, and PIN codes for users, such as customs officials who may need to open the container.

Inspiration for the Cargobox, Hilders says, resulted from observations regarding the amount of abuse experienced by airfreight during the loading process. "I saw what an old-fashioned way cargo is loaded," he states, noting that decades earlier, steamships had begun using metal containers designed specifically for storing freight moving in vessels, which ensured that cargo would be less likely to be damaged. "I'd been working with advanced composite technologies," he adds, and thus began designing a box specifically for air transit.

In 2003, Hilders says, he began investigating how RFID could also provide security, by enabling a container's location to be tracked as it was shipped and received, and how the technology could be used to trigger the opening of a container's lock. The RFID tag sleeps unless awoken by a reader, thereby conserving battery life. The container solution also comes with GPRS technology that can transmit sensor data and the unique RFID identifier in the event that cellular connections are available, but not RFID readers—though the GPRS radio switches off when a sensor detects that a container is aboard an aircraft, based on changes to air pressure, as well as other sensor data. 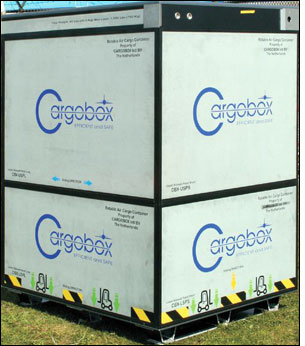 For the Amsterdam test, the containers were first loaded with freight, after which each tag was scanned by the logistics provider's staff, using an Identec reader built into a Motorola Solutions MC 9094 handheld computer. The unique ID, along with sensor data, was transmitted from the handheld to Cargobox's hosted server via a cellular connection. A worker could then close and lock the container, by entering a PIN via the lockbar's keypad. The handheld also uploads the PIN to the Cargobox server via the cellular connection, so that an authorized recipient can utilize his or her own handheld device to access the server and download the PIN, in order to unlock the container.

Once this was done, the containers were placed on a conveyor that brought them to a 747 destined for either Hong Kong or Amsterdam. After the container was subsequently unloaded from the aircraft, its tag ID was read via another Motorola handheld computer. All sensor data was then received and forwarded to the software, which evaluated that information for any indication of a problem, such as an authorized attempt to open the container. In such an event, the software was capable of sending a text message or e-mail to shipping management, thereby alerting them to the problem. At the same time, as the tag ID was read, the handheld device provided the authorized PIN, which the staff could then enter into the keypad on the container's lockbar, thereby triggering the lock's release. The container was then reloaded, and the same process was completed.

The Cargobox software stored details pertaining to every shipment, including sensor readings throughout transit, which had been stored by the Cargobox RFID device until interrogation by a reader.

In addition, Hilders says, the Cargobox system can be utilized by custom officials to more quickly move freight through the customs process. A freight list could be provided, listing each tag's unique ID, and customs officials would be able to access that data by reading the tag, either with a handheld or fixed reader. What's more, they could access the PIN in order to open the container for examination, if necessary.

Cargobox Europe can also provide Identec i-Port F310 fixed readers for use in the logistics chain. The fixed readers would act as portals in the loading or unloading area, capturing ID numbers as containers were moved.

Hans Koomen, Cargobox Europe's director of business development, says the test results exceeded his company's expectations. In addition to proving to the firm that data could be captured and stored related to a container's movements throughout transit, the tests also showed that cartons were as strong as the company had hoped they would be. "There was no damage to the cartons at all," Koomen states.

The logistics provider has indicated to Cargobox that the solution saved employees time otherwise spent preparing pallets for shipment, since filling out paperwork and inputting that paperwork into the back-end system was no longer necessary. This meant the company could carry out the loading work itself, instead of outsourcing the loading phase to a subcontractor, as is currently done. According to Koomen, the logistics provider estimates that this would save approximately €200 ($278) per pallet.

Now that the tests have concluded, Cargobox Europe is writing a report about the experience, which will be provided to the Dutch government's Ministry of Economic Affairs later this fall. Based on the test's findings, Cargobox Europe could make changes to its technology, if necessary.