C&A Rolls Out RFID to All of Its French Stores

The apparel company is expanding its deployment of EPC UHF RFID technology to 164 sites, with the goal of improving the availability of items on shelves, leading to increased sales.

Feb 26, 2016Following a three-year trial of radio frequency identification technology at its German stores, C&A is expanding its use of the system to track inventory and automate advance shipping notices in France. The expansion employs RFID hardware provided by Checkpoint Systems.

The global apparel retailer, headquartered in the Netherlands, began using RFID in 2012, first as a trial in five stores within Germany. It then installed the system at 25 locations, and then 100 more, in the same country. The latest rollout consists of providing RFID readers to all 164 stores in France, as well as C&A's distribution center in Meaux. In addition to expanding the system's adoption to its French operations, C&A has begun tagging and tracking new product categories: menswear, suits and children's clothing. The RFID technology is expected to be taken fully live at the French stores by mid-2016, says Joachim Wilkens, C&A's head of functional IT. 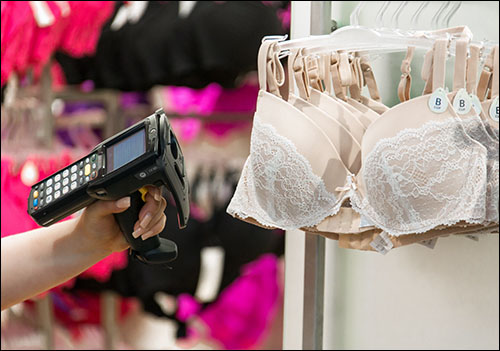 To conduct an inventory count of merchandise on the sales floor, a C&A store employee uses a Zebra MC3190-Z handheld reader to capture the ID number of each item's RFID tag.

The French deployment will serve as the final test before the company rolls out RFID technology to all of its stores throughout Europe, Wilkens says. He expects the RFID system in France will replicate most of the processes already implemented at the German stores, and serve as a test for using RFID at a distribution center. What's more, he adds, the company also intends to determine how well the technology works with the additional categories.

C&A's ultimate goal is to use RFID to improve its stock data accuracy and the availability of items on store shelves, so that customers can find the right color, size and fit. For C&A's RFID system in Germany, supplied and installed by Avery Dennison, tags are attached at the point of manufacture, and Creativesystems software is used to forward shipping notices after the tags were read at the factory (see C&A Expands RFID Usage to Track Inventory). Once the products are received at the store, employees use Zebra Technologies MC3190-Z handheld readers to capture the ID number of each tag and forward that information to Checkpoint's OAT Foundation Suite software, which updates the inventory status at the store accordingly.

That system has proved its ability to raise inventory accuracy, reduce out-of-stock incidents and decrease the amount of time employees spend counting inventory, compared with more manual methods. Therefore, the company has proceeded to the next step of installing the solution in France. In Germany, C&A stores receive advance shipping notices from merchandise suppliers, but in France, the notices will be sent from C&A's distribution center. Consequently, the system is being installed somewhat differently for the new deployment. The Checkpoint software being employed for the French installation is cloud-based, so that C&A's managers, whether at a store or at the DC, can view inventory levels at each location. The tags are being applied to goods at the point of manufacture, but advance shipping notices will be sent to stores from the DC, rather than from the factory. The notices are generated by C&A's own enterprise resource planning (ERP) software, once the company receives the RFID-based data from the OAT Foundation Suite software.

C&A staff members will read the tags at the distribution center using RFID Box Tunnel readers supplied by Checkpoint. The tunnel reader is designed for identifying items packed in totes, cartons and boxes, says Geert den Hartog, Checkpoint's key account director for apparel. When boxed goods arrive from the manufacturer, they are placed on a conveyor and then pass through the tunnel reader. The DC will also use a Checkpoint RFID Hanging Garment Tunnel to identify merchandise on trolleys.

Each tag's ID number is linked to the stock-keeping unit (SKU) of the product to which it is attached. When tags are read at the DC, their ID numbers will be forwarded to the OAT Foundation Suite software, which will update inventory status at the DC and share the data with the C&A software for the creation of advance shipping notices.

The stores will be equipped not only with the MC3190-Z handhelds, but also with Checkpoint Counterpoint iD RFID readers. Store employees will use these handhelds during the receiving process to confirm which items have arrived, as well as to perform inventory counts on the sales floor. 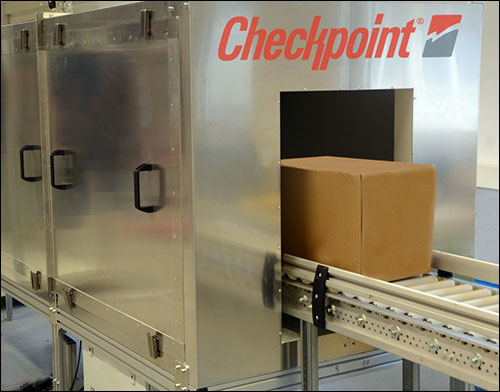 At C&A's DC in Meaux, workers use Checkpoint RFID Box Tunnel readers to identify merchandise inside totes and boxes.

The Counterpoint iD readers are being installed at sales counters. When a customer purchases an item, its tag is read and its ID is forwarded to the OAT Foundation Suite software, which shares that data with C&A's ERP system. Replenishment orders are then placed accordingly.

"For France, 60 to 70 percent of all items will be tagged at source," Wilkens says.

One challenge that Checkpoint faced with the latest deployment, den Hartog explains, was ensuring that tags were read accurately at high speed at C&A's distribution center, while also maximizing throughput. The DC was laid out in such a way that garments in bundles, boxes and trolleys would be in close proximity to each other, so the system needed to ensure that there would be no stray tag readings. Checkpoint "optimized the readers and software in the tunnels to ensure read rates were extremely accurate," he states.

C&A has several expectations for the RFID technology in the French deployment, Wilkens says, adding, "We expect a much higher stock data accuracy—and, based on this, much more efficient store processes to gain higher on-shelf availability, higher customer satisfaction and, by this, higher sales." In addition, he says, the company hopes to use the RFID-based data to better meet online orders, by shipping goods from the nearest store. "We see the high level of real-time accurate stock data as a pre-condition for the future omnichannel strategy of C&A."