The Italian food manufacturer is marketing an RFID-enabled oven that captures instructions from a passive tag, then automatically mixes and cooks the ingredients; the company also has RFID plans in the works for its Safety for Food program.

The system is one of several initiatives Barilla has underway that use technology to improve the consumer experience by automatically accessing data about its products or their ingredients. Another example is a technology platform known as Safety for Food (S4F), designed to bring visibility to the path that food takes on its way to the store shelf. In that way, consumers can easily access supply chain data and ensure that the products they buy are fresh. That solution currently uses QR codes to accomplish this visibility, says Andrea Belli, Barilla's technical project leader for quality and food safety, though the company is exploring the use of both passive and active radio frequency identification technology to help track those ingredients. S4F software and integration is provided by Penelope SpA, while Cisco is supplying the network connectivity.

Approximately five years ago, Barilla began working with RFID technology provider ID-Solutions (a spinoff company of the University of Parma RFID Lab). Then, three years ago, it worked with Whirlpool to develop Cucina Barilla, by which the appliance manufacturer could sell a specialized Barilla-branded oven, created with the help of ID-Solutions. Barilla envisioned offering the oven—for sale to Italian consumers—to operate in conjunction with Barilla products, enabling customers to prepare and cook meals based on data specific to a particular product's recipe. The oven includes microwave and conventional oven components, as well as a pump and a motor to add water to pasta or other dry ingredients and mix them together.

Each Barilla kit contains the ingredients for cooking one of many dishes, including pasta, risottos, bread, pizza, focaccia and cakes. Attached to the side of each kit is an RFID tag. When a user places the tag near an oven's display screen, a built-in RFID reader captures that tag's unique ID number, enabling the oven to recognize the kit and automatically set the appropriate cooking procedure and timing.

In addition, the oven has a "delay" function. "Consumers can program the cooking and have the dish ready at a time of their choice," Belli says, "so that they can wake up in the morning to the smell of fresh bread or come home after work and find dinner ready."

To automatically program the oven to make each recipe, as well as to display some manual instructions for a user, Barilla considered the use of linear or 2D bar codes, in addition to HF or ultrahigh-frequency (UHF) passive RFID tags. Barilla worked with the University of Parma RFID Lab, in conjunction with ID-Solutions, to determine which technology would be best for the solution, says Andrea Volpi, ID-Solutions' chief operating officer.

The group determined that for several reasons, 13.56 MHz HF RFID technology compliant with the ISO 15693 standard would be the best option, according to Francesco Fantoni Guerci, ID-Solutions' CEO. First, Barilla did not want to require that the ovens connect to the Internet, so the appliances needed to be able to access instructions for each recipe without having to retrieve them from a server. In addition, because the company intended to add new recipes over time, with the addition of new products, the oven needed to be able to receive new data with the use of each product. Barilla also wanted to ensure that each ingredient kit used to make a meal had a unique identifier that the oven would accept only once. After a kit was used to make a meal, the oven's reader would no longer recognize its tag's ID, thereby ensuring that consumers did not try to use that same tag multiple times but with their own ingredients. (This process could negatively impact the quality of what should be a Barilla product, he explains).

HF RFID provided these options, the company reports, since high-memory HF chips are available that can store a large amount of data. What's more, HF RFID readers were comparatively inexpensive to build into an oven.

ID-Solutions selected NXP Semiconductors' iCode SLIX chip with 1 kilobit of memory, and designed a customized Smartrac BullsEye RFID tag and label that could be attached to the exterior of the product packaging. The firm encodes each label's tag with the appropriate recipe data, and then sends the labels to Barilla's manufacturing site, where they are applied to the packaging. ID-Solutions also designed a quality-control testing station—featuring an NXP reader chip and a reader antenna designed by ID-Solutions—with which Barilla reads a kit's tag before shipping that product to a customer. 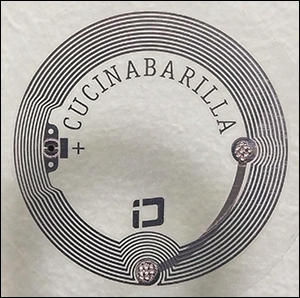 For the Cucina Barilla system, ID-Solutions designed a customized Smartrac BullsEye RFID tag that could be attached to the ingredients' packaging.

The ovens also come with an HF reader chip and an antenna (customized by ID-Solutions) to interrogate a kit's tag when it is placed within short range of the oven.

To cook a meal, consumers must order an ingredient kit from the Cucina Barilla website. While the ovens are sold at most large electronics stores in Italy, the kits (which consist of packages including all necessary ingredients) cannot be purchased in stores.

When a consumer wants to cook an item (pizza, for example), he or she places that kit's tag close to the reader antenna, near the oven's display screen. The oven reader captures the tag's ID number, along with all the information for making that recipe. The screen can then display instructions, such as "pour ingredients into a bowl and insert into mixing chamber." 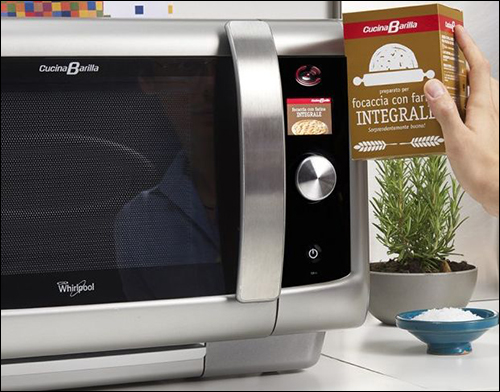 To begin the food-preparation process, a consumer places the kit's RFID tag close to the reader antenna, near the oven's display screen.

The user follows the displayed instructions, while the oven's built-in computer follows the detailed steps encoded on the tag, such as mixing, adding water or cooking at a specific temperature. Once the food is finished cooking, the oven displays the words "Buon appetito" on its screen.

The Cucina Barilla system was released to the public at 400 Italian stores this summer. While the company currently offers 20 RFID-enabled recipes, that number is expected to rise during the next two years to about 100.

Food Safety Project
Barilla is also undertaking a large project for tracking the food supply chain, says Michele Festuccia, Cisco Italia's system engineer leader. The S4F project, he explains, aims to introduce a globally adopted platform to improve food safety and enable decision-making by companies for improving the supply chain. Such food-safety decisions are typically made by directors of the company's quality, food-safety and regulatory corporation department, as well as by the head of the anti-fraud department and the manager in charge of external relations. "The main objective of the project," Festuccia says, "is the digital evolution of the food supply chain in compliance with international and Italian regulations, in terms of safety, quality standards and origin of the raw materials."

Cisco is providing Barilla with its Intelligent Industrial Network. This will enable the company to collect, aggregate and forward data, via a Wi-Fi connection, from areas throughout the supply chain when QR codes are scanned on products or on raw ingredients for those products. In the future, however, RFID tags might also be used.

According to Belli, Barilla chose to start the pilot with the Safety for Food initiative, which is focused on the customer experience portion, to showcase at the Expo 2015 world's fair in Milan. With Expo 2015 running from May to October, Barilla selected the special-edition pastas and sauces that would be a part of this pilot, based on the raw materials available in March, as well as each operation plants' ability to produce the special-edition stocks in time for the event.

Penelope SpA developed the ValueGo software platform that enables real-time supply chain monitoring, as well as vertical features for compliance checking, tracking and tracing of all food ingredients along the supply chain. The companies worked together to build an Open-Loop Controller Platform for aggregating and analyzing the data, in order to extract information related to the end-to-end chain.

The S4F project, which began in May 2015 with the launch of Expo 2015, is only a pilot at this time, involving limited-edition packages of Barilla pasta and sauces. The special Barilla packages were sold at the event's "Supermarket of the Future" exposition, and are currently being sold at COOP grocery stores throughout Northern Italy.

To access data about a particular product and the origins of its ingredients, consumers can use their smartphone to capture that product's QR code. In the future, however, RFID could be used in multiple ways to capture more information automatically throughout the supply chain, Marandino says. Belli adds that Barilla is now investigating several RFID-based options. For instance, he says, passive RFID could be used to identify goods and their movements at each company, both within and outside the supply chain. Barilla is also investigating the use of active RFID tags with embedded environmental sensors and possibly GPS receivers, to ensure the automatic and continuous collection of data and thereby improve the monitoring of food processing and warehousing.

The information and results gained from this pilot will be incorporated into Barilla's manufacturing plan during the next several years, Festuccia reports.