The car and truck rental agency would be the first to install TransCore's eZGo Anywhere transponders, which are interoperable with most toll-collection systems.

Dec 23, 2008Car rental company Avis Budget Group is collaborating with the Highway Toll Administration (HTA), an electronic toll-payment service provider, and RFID technology firm TransCore to begin the deployment of TransCore's eZGo Anywhere RFID transponders in 2009. The transponders will enable customers to pass through toll plazas throughout much of the United States, and be billed at a later date.

According to TransCore, eZGo Anywhere is the first active RFID tag capable of working with nearly all tollway RFID readers around the country, including E-ZPass in the Northeast, Texas' TxTag and Florida's SunPass. The car rental firm—which already provides local electronic toll devices for some of its Avis Rent A Car, Budget Rent A Car and Budget Truck Rental vehicles—intends to have the system in operation at the end of the second quarter of 2009, says Michael Caron, Avis Budget Group's VP of product and program development, as long as the various local toll authorities sign on to the project. 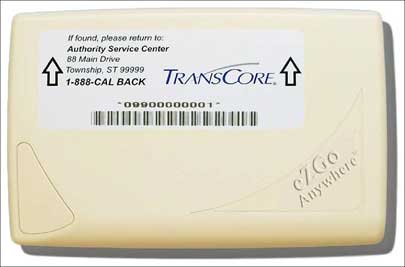 With more than 350,000 vehicles on the road nationwide, Avis Budget Group is the largest car and truck rental company in the United States. For the past three years, it has provided many cars with RFID transponders attached to their windshields that pay tolls at local tollbooths. As a customer pays for a car rental, he or she can also sign up for the eToll system, at a cost of $1.50 per day. With the service, the user provides a credit card number that is then linked to the unique ID number on the car's transponder, and directed to HTA. Each time the user passes through a local tollbooth, the ID number is captured and forwarded to HTA, which then bills that person's credit card company directly.

The eToll system has been well received by Avis Budget Group's customers, Caron says, with more than 50,000 cars equipped with E-ZPass transponders for the Northeast alone, and with 9 million toll events recorded since the company introduced the service in the spring of 2006. However, he notes, the system has shortcomings that the eZGo Anywhere tag would resolve. The various eToll transponders are not interoperable, he explains. At present, E-ZPass is accepted only in Delaware, Illinois, Indiana, Massachusetts, Maryland, Maine, New Hampshire, New Jersey, New York, Pennsylvania, Virginia and West Virginia. So if a vehicle were rented in an E-ZPass state, its transponder would be useless in other regions.

That puts limitations on both customers and Avis Budget, Caron says, since not only is a user confined to eToll payments in a particular region, but the vehicle's eToll tag can not be used by a new driver in another location. In the case of a truck rented in Texas and returned in New England, for instance, Avis Budget would need to change the transponder to an E-ZPass version before the next rental of that vehicle.

In September 2008, TransCore, an RFID and vehicle-tracking product company located in Harrisburg, Pa., debuted its multiprotocol transponder (see RFID News Roundup: TransCore Unveils Tag Designed for Most Toll-Collection Systems). TransCore provides RFID transponders for local agencies, such as Florida's Turnpike Enterprise (FTE), which created the SunPass toll-collection system. The company already had a background in toll-collection RFID technology, says Kelly Gravelle, TransCore's chief technical officer, and had been developing the eZGo Anywhere transponder for approximately a year. The active RFID tag, which operates at 902-928 MHz, has a non-replaceable battery with a life of about 10 years.

The transponder is capable of operating in read-write mode and adjusting its characteristics to meet the protocol needs of each tollway region. For example, in a region in which—for security purposes—the interrogator sends an authentication command, the transponder is capable of receiving that transmission and responding with the appropriate code to verify its authenticity.


The tag, approximately 4 inches long by 3 inches wide by a half-inch thick, can be attached on the inside of a vehicle's windshield. Because it is weatherproof, however, it can also be affixed outside the vehicle, such as on a license plate in the case of a vehicle with metalized glass windshields to reduce sun-glare, which inhibit RF transmissions. But in the case of Avis Budget vehicles, Caron says, all tags can be attached to the windshield's interior.

HTA, already the service provider to Avis Budget Group's eToll system, began discussions in the fall of this year regarding the deployment of the eZGo Anywhere transponder system for Avis Budget Group between the vehicle rental company and TransCore, according to David Centner, HTA's president and chief executive officer.

"Besides the obvious benefits to Avis and its customers," Centner says, "drivers who pay for tolls electronically cause less pollution, and traffic congestion can be mitigated [by speeding the passage of rental vehicles through tolls]. Another benefit is a reduction in transaction costs incurred by the toll road agency, which include the cost of employing personnel to collect cash from drivers. It is significantly more expensive to process a toll transaction manually than through automated electronic means."

Avis Budget also eventually hopes to employ RFID technology to track its vehicles around the various rental agency lots, Caron says, though he does not expect the company to accomplish that goal with the eZGo transponders. "I don't see this technology allowing me to track vehicles around the lot," he states, noting that "The benefits would be outweighed by the cost" of deploying the necessary readers throughout all of the lots.

In order to have the eZGo Anywhere system operating in Avis Budget vehicles, all tolling agencies will be required to sign on to the new system, something Caron expects to be fairly straightforward. "The work that needs to be done is minimal," he says, since it would not be necessary to replace or modify the readers, and because the agencies already send all billing data directly to HTA, which, in turn, invoices the customer.

"The key to the whole piece," Caron says, "is the ability of the transponder to be read across various toll readers, and that is already very doable." He says he plans to replace his vehicles' E-ZPass and other local toll transponders with the eZGo devices, and also begin deployment in the Northeast, then move south and west to other geographical regions in the United States. The eZGo tag, however, will not work with the tolling systems in the states of Colorado, California and Washington.

Eventually, Centner says, HTA "would like to see this technology deployed by all rental agencies and fleet operators."

Caron agrees, noting, "Twenty years down the road, I think we will see vehicles coming off the assembly line with this [technology]."