ExpressPay will be rolled out to as many as 30,000 people over the next six months.

Jul 16, 2003July 16, 2003 - American Express said today that it will extend a test of its ExpressPay RFID payment product to 4,000 users -- mostly AmEx employees -- and 175 merchants in the Phoenix area. The credit card company is also looking to expand the number of participants to upwards of 30,000 over the course of the six-month trial. 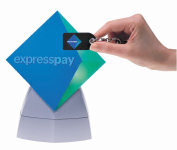 AmEx began testing ExpressPay last summer with a limited number of American Express employees in Phoenix and later with consumers at a cafeteria in a multi-tenant building in Jersey City, NJ. The ExpressPay key fob attaches to a user’s key chain.

The key fob contains 13.56 MHz RFID transponder from Texas Instruments. The readers are also made by TI. AmEx opted for 13.56 MHz technology because the standards surrounding it -- namely ISO 15693 and ISO 1443B -- allow for a higher level of security than low-frequency systems.

ExpressPay uses the same backend as the merchants’ existing credit and charge card point-of-sale systems and can be adapted so that the reader can be incorporated into a POS terminal. The system works much like the ExxonMobil SpeedPass, which also uses TI technology.

A user waves the key fob in front of an RFID reader to pay for small items that are normally purchased with cash. The transponder transmits a serial number that identifies the customer, and the transaction is charged to the customer's credit card registered with the system. Consumers can also opt for "ExpressPay Pre-Loaded," which stores a prepaid amount of money in the system. The price of the purchase is deducted each time you make a transaction.

Initial results of past trials have revealed customer spending increased by 20 to 30 percent when the key fob was used, and the transaction time was cut by 20 to 40 percent.

The cost of deploying the technology outweighs fraud risks associated with traditional magnetic stripe cards, according to David Bonalle, vice president and general manager of advanced payments development at American Express. "We have a cryptogram on the key fob that we decrypt in the back-end systems and because all ExpressPay transactions are authorized through the network, we check the cryptogram on every transaction," he says.

Since a customer's name and account number doesn’t appear anywhere on the key fob, it makes it harder for thieves to clone the transponder and make fraudulent purchases.

"From a payments perspective, RFID is a much more secure device then the standard credit card," says Bill Allen, marketing communications manager for Texas Instruments’ TI-RFid. "Head-to-head, magnetic stripe versus RF, RF is the substantially superior technology for doing payments."

Bonalle wouldn’t reveal the next step American Express will take once the six-month trial is completed. He did say, however, that some merchants who aren’t involved in the trial are interested in piloting the technology, so American Express may extend this pilot program beyond six months. -- Jennifer Maselli,
jmaselli@rfidjournal.com