The forensic toxicology and health-care sciences testing lab is using a UHF RFID system to track the storage and processing of blood and tissue samples.

May 10, 2016Aegis Sciences Corp., a forensic toxicology and health-care sciences laboratory, is employing an RFID-based solution to monitor the status of the blood and urine samples that it receives. Aegis operates four laboratories in Nashville, Tenn., which process samples for more than 2,500 clients daily, testing those samples for the presence of medications, opioids or other substances. Each sample, which must be stored at controlled temperatures, typically moves from one piece of equipment to another for testing purposes before the client receives the results. The labs typically contain 10,000 to 15,000 samples at any given time.

Moving the samples efficiently is critical, says Rob Case, Aegis' manager of process research and innovation. Many patients, for instance, are being tested for pain management, and are awaiting the testing results so that they can be prescribed the proper pain-relief medication. 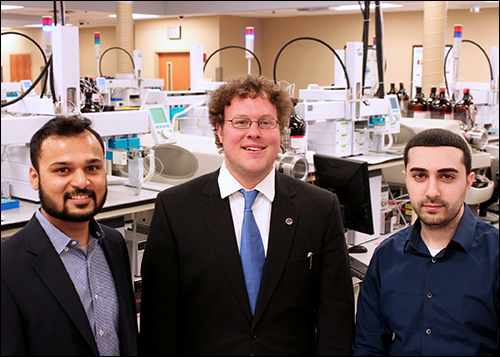 Previously, Aegis Sciences Corp. tracked every sample that it tested via a bar-coded label and handwritten or manually inputted notes. Each sample's status was not automatically tracked, however, and scanning bar codes at every point at which each sample was processed or stored would have been unrealistic.

If a client called to learn a sample's status, Case explains, an Aegis client services representative would have to contact a laboratory manager, who would then have to walk through the lab looking for it. The lab manager would report its location to the service rep, who would provide that client with an update. This was a time-consuming process for the individuals involved in finding and updating that sample's status, he says.

The business is growing as well, Case reports, so tracking the samples has become increasingly challenging. In approximately 2010, Aegis Sciences Corp. began investigating the use of RFID to track the samples automatically. The company wanted to know where its samples were within the lab, Case explains, and to have a real-time snapshot of the facility. "We wanted to take it a step further," he states. "Instead of just tracking it in a section of the lab, we wanted to know what instrument it was on."

By knowing on which instrument a particular sample is being tested—or has already been tested—the system would thus know which process had been completed. That data would also enable the lab to determine how instrumentation is performing, based on the number of samples being processed there, as well as how often such processing occurs.

Case teamed up with Vikram Ghorpade, Aegis' laboratory informatics specialist, and Nijyar Muhammet, the company's laboratory operations automation developer, to come up with a solution. Vikram was responsible for the RFID hardware and software configuration and installation, along with the creation of databases to store the collected RFID data. Nijyar, meanwhile, handled the metrics-based algorithms, interfaces and websites to display the data.

The solution consists of software developed in-house, coupled with MSM Solutions' PortalTrack software and Zebra Technologies RFID printers to link the ID number encoded to each RFID label as that label is being printed and applied to a particular sample. Impinj Speedway Revolution R220 and R420 readers with Times 7 antennas are installed at specific locations around the laboratory. The same makes and models of readers and antennas are also installed in the cooler in which samples are stored, while R220 readers with Impinj Matchbook near-field reader antennas (for closer range) are installed on about 125 instruments.

For each new sample arriving at an Aegis lab, a label with a built-in Smartrac EPC Gen 2 passive ultrahigh-frequency (UHF) RFID inlay is encoded with a unique ID number via a Zebra RFID printer, and is then attached to that sample. At the same time, that ID is transmitted via the PortalTrack software on the lab's database. When the sample is placed within the cooler, the reader captures its ID and updates the software to indicate that the sample is in cold storage. Once the sample is removed from the cooler, the reader will no longer be able to read the RFID label's ID, and will send an update to the software accordingly. Each time the sample moves from one instrument to another, or from one section of the lab to another, the RFID readers capture those events and again update the software on the lab's database.

A scientist operating the instruments can view the history of each sample being worked on, and also know where it should go next, based on the sample's history and processing requirements.

If a client calls requesting a sample's status, a lab representative can simply search for that patient's ID in the software to ascertain where the sample has been and, therefore, when it will be completely processed.

Aegis is also collecting historical data regarding its own efficiency at specific times and days, as well as each instrument's operation. "When you're running a large laboratory," Case says, "it's important to know how the instrumentation is performing." If one instrument is taking longer to complete the testing, it may require maintenance or inspection.

In addition, the system provides long-term metrics regarding the rate at which samples are being processed, and when a lab may require more or less staffing. "What I'm interested in is long-term data mining. With long-term data mining, lab leadership can pull out trending data," Case says, explaining how the RFID data is correlated with information related to time, date and staffing.

The system also aids certifying scientists who must approve the completion of work accomplished on each sample. While the scientists, in the past, would have to read through manually entered details about the work completed, they can now simply sign in to a site in the software, created by Aegis, and review all of the information there. What's more, the software can warn a staff member in the event that a sample is being misrouted. For instance, if a specific process is expected for a sample, and if that sample's tag is then read at an incorrect location, the clinician will receive an alert via the software at his or her station.

Aegis expects to achieve a return on its investment based on a reduction in labor time that employees previously spent searching for samples and manually filling out details regarding which processes each sample is undergoing. "Pure labor savings is huge," Case says. However, he adds, the greatest benefit is in client satisfaction and retention. Automating the sample-tracking process, Case explains, enables them, on average, to be processed faster.

It took approximately one year to plan the system, Case reports, in order to ensure that tags were being read properly as the samples moved through the labs. Identifying the proper antennas for the instruments and coolers, as well as for the zone-reading in the ceilings, required considerable research before Aegis selected the near- and far-field antennas it now employs. The system was taken fully live early last year.

Brett Wilkerson, MSM Solutions' RFID business-development director, says that PortalTrack is designed to fit end users' existing workflows and processes so that integration of both the RFID software and hardware is non-disruptive. This was especially important in a busy laboratory environment, he notes, adding, "One of the statements we use to describe our software is 'Keeping Things Connected.'" At Aegis, he says, "They essentially have a 'talking' lab that provides real-time visibility into process flows, sample locations and IDs" that fit that objective.