Researchers from the United States, Korea and Japan are working together to develop a cost-efficient system to detect structural deficiencies.

Aug 01, 2011More than 72,000 of the 600,000 bridges in the United States have been rated "structurally deficient," according to the U.S. Bureau of Transportation Statistics. Another 80,000 bridges have been deemed "functionally obsolete." The federal government requires bridges to be inspected every two years, which is costly and time-consuming. Now, the Illinois Structural Health Monitoring Project (ISHMP) at the University of Illinois at Urbana-Champaign, has developed an inexpensive way to monitor the structural health of bridges using wireless RF sensors. The sensors are being tested on the Jindo Bridge, in South Korea.

"My grad students and I were working on making wireless sensors a viable technology for monitoring of civil infrastructure," says Bill Spencer, the Nathan M. and Anne M. Newmark Endowed Chair of Civil Engineering at the University of Illinois at Urbanna-Champaign. "We tried a variety of different sensors before settling on the Imote2, a mesh network device developed by Intel. It had the computing power and memory that enables us to get high-fidelity information on vibrations on a bridge." 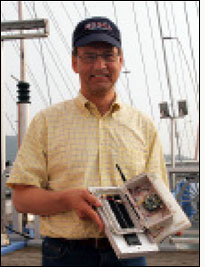 Researcher Bill Spencer displays one of the wireless sensors used to monitor vibrations on the Jindo Bridge, in South Korea.

The Imote2 was commercialized by Crossbow, which then sold the technology to MEMSIC, a company that offers inertial sensors. The ISHMP has been collaborating with teams from the Korea Advanced Institute of Science and Technology and the University of Tokyo. In 2009, it installed 70 Imote2 nodes with 420 sensors along the span and cables on the Jindo Bridge. The sensors include accelerometers that measure vibrations, as well as temperature, humidity and light. When bridge responses out of a normal range are detected, the information is passed from one sensor to the next until they reach a node that transmits the data to a host system.

Since the initial deployment, the teams have been improving the software and hardware. They are using filters to avoid potential signal errors caused by fluctuations in the sample rate, as well as advanced algorithms for power management. The system was upgraded last year, and in June, it underwent another upgrade to expand the network to 113 nodes (663 sensors), all of which are solar-powered. So far, the sensors have not detected any signs of structural deficiencies on the Jindo Bridge, a relatively new structure.

The ISHMP developed customizable open- source software for collecting and analyzing the sensor data, and MEMSIC has commercialized the accelerometer sensor board developed by the ISHMP for the Imote2. "There are currently 75 research groups in 15 countries around the world using the ISHMP software/hardware platform," Spencer says.

He believes the technology could be used in aerospace, chemical, manufacturing and other industries for a wide variety of applications, including monitoring industrial equipment, heavy machinery, axles and carriages on trains, and other critical equipment where wired solutions are costly or impractical.

"The sky is the limit," Spencer says. "This application can be valuable anywhere vibration is an issue."