What You Need to Know About RFID Sensors

By marrying RFID's ability to identify objects and communicate via radio waves with sensors, businesses can monitor the condition of items and environments over long distances cost-effectively.

Dec 01, 2011As radio frequency identification technologies gain acceptance worldwide, many companies are realizing they want to go beyond just identifying an object or location—they want to know about conditions. The RFID industry has responded with a variety of solutions that automate the collection of data on humidity, light, sound, temperature, vibrations and more.

In general, RFID sensors fall into two broad categories. There are devices based on conventional RFID systems, in which a tag responds to a reader. The sensor can be incorporated into active or semipassive tags, such as those used for asset tracking, container security or personal identification.

There are also more sophisticated wireless sensors (sometimes called motes) that can form "mesh," or "ad hoc," networks, in which data regarding an object's condition is passed from one sensor to another until it reaches a reader that serves as a gateway to a local- or wide-area network. The information is then forwarded to a back-end system for analysis or action. Mesh networks reduce installation costs by allowing a company to collect data from sensors using fewer dedicated readers than it would require with a conventional RFID system.

The cold-chain sector has been using RFID temperature tags to monitor perishables in the supply. Now, companies in other industries, including energy, construction, manufacturing and the arts, also are adopting RFID sensor solutions, as are researchers in remote areas.

Wireless sensors are a key solution for companies aiming to monitor conditions, especially if they want to deploy a greater number of sensors than they could affordably hard-wire, says Kelvin Chan, a wireless networking analyst at ABI Research. Wireless sensors can get you "more real-time information, more end points and more data—at a lower cost because you've removed the cabling cost."

RFID sensor technology has matured significantly over the past few years, but there's no single solution for all businesses. Here's what you need to know to decide if—and how—a wireless sensor solution could improve your company's operations. On the opposite page is a listing of vendors that provide sensor technology to different industries.


Each wireless sensor in a mesh network has three jobs: sense, compute and communicate. To achieve these functions, each device in the network contains a unique identifier, a battery, a radio transceiver (for communication), one or more sensors (to measure, say, temperature, humidity or light) and a microprocessor (to store data and control the sensors).

Mesh networks have built-in redundancy. If one mote in a network goes down—that is, if a sensor's battery dies—the device automatically communicates with another mote nearby, to ensure data can be passed to the back-end system.

Most mesh networks comply with the IEEE 802.15.4 standard, designed for low-power transmissions of short data packets. (They often use the ZigBee wireless protocol because of its low power requirements.) These characteristics are essential for applications such as building or industrial automation, in which the sensors need to report data often, but the data transmission speed does not have to be high and the sensors must expend as little power as possible to extend battery life. Depending on the frequency used and the specific components, these sensors can have a read range of 10 meters (33 feet) to 100 meters (328 feet).

Wireless sensors that communicate directly with readers can transmit data more quickly than those in mesh networks. That improves their ability to be read while in motion, and they tend to have longer read ranges—230 meters (755 feet) or more. For these reasons, nonmesh sensors generally are used when both the location and condition of assets must be monitored.


One drawback of wireless sensors is their battery lifespan, typically five to 10 years. When, say, many sensors are deployed in factories to monitor machinery health, it can be time-consuming and costly to replace their batteries. And it can be impractical when sensors are in remote areas.

To overcome short battery life, researchers have been developing "energy-harvesting" sensors powered wholly or partly by scavenging nearby sources of heat, light, vibrations or even radio frequencies. The goal is to make wireless sensors more maintenance-free, scalable and cost-effective. 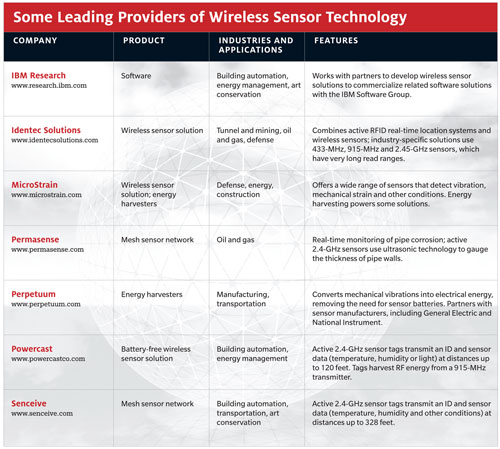 To view a larger version of this table, click here.

Powercast, for example, has designed a battery-free wireless sensor that includes a receiver that converts radio waves into DC power. The company is targeting the heating, ventilating and air conditioning (HVAC) sector, as well as other building-controls industries, which are increasingly using wireless sensors to reduce energy consumption. "I think there is tremendous growth in wireless sensor networking and energy harvesting," says Harry Ostaffe, Powercast's VP of marketing and business development.

Sensor manufacturers General Electric and National Instruments each have partnered with Perpetuum, a developer of energy-harvesting devices, to integrate harvesters into wireless sensors to detect vibrations in machinery used in manufacturing. If the sensors detect vibrations that are too fast or too slow, or exhibit unusual frequencies, the system alerts maintenance staff. The Perpetuum devices generate power by converting vibrations into electrical energy, so when used in vibration sensors, the force being monitored is also the force being scavenged for energy. The vibration-based sensors also have potential as preventative-maintenance tools in the transportation industry, for monitoring ball bearings in passenger and freight trains, says Keith Abate, Perpetuum's director of business development.

British Petroleum (BP) is deploying mesh sensor networks at its 11 refineries around the globe, to monitor pipeline health. Rather than wiring sensors along the pipes, which would be expensive and labor-intensive, the company is installing wireless sensors provided by Permasense. The sensors use ultrasonic waves to monitor the thickness of pipe walls, and can transmit alerts to BP if they sense thinning, which would signal corrosion. The information can help BP avert disasters that could result from oil leaks, and will provide important insights into where and when the company needs to perform preventative maintenance on its pipes.

Since 2009, Sweden's national transport administration, Trafikverket, has been using wireless sensors from Identec Solutions to keep workers safe during construction of the 3.7-mile-long Norra Länken (Northern Link) tunnel, in northern Stockholm. Gas sensors are integrated into the ID badges issued to workers. Readers mounted throughout the tunnel track each worker's location and collect each tag's sensor readings, monitoring levels of nitrogen dioxide and carbon monoxide. If the sensors detect unsafe levels of either gas, the readers forward the information to software on a central server, which triggers ventilation fans in the vicinity of the exposed workers inside the tunnel.

Earlier this year, the National Aeronautics and Space Administration (NASA) deployed a wireless sensor solution from MicroStrain to capture vibration data, as well as gauge the acoustic emissions causing the vibration, during space shuttle and rocket launches at Florida's Kennedy Space Center. In the past, NASA used wired sensors, but was limited in mounting locations due to mechanical and environmental hazards. In addition, it was difficult to monitor all the structures and equipment spread across many acres of land. Now, NASA can analyze the data collected from the wireless sensors to better predict damage that could result from its launches.

New York's Metropolitan Museum of Art has partnered with IBM Research to determine whether IBM's wireless networking solution could improve preservation of items the museum stores at The Cloisters, a branch of the Met that displays medieval art and architecture. Since March, a network of 100 sensors has been collecting environmental data, including temperature, humidity, light, airflow and air quality. IBM software analyzes the data and correlates it with climate variables, such as the position of doors leading into the monitored areas, or the status of lighting and the sunlight that enters the areas throughout the day. The goal is to maintain the temperature or humidity levels required to conserve the art—especially very old, fragile pieces that are sensitive to their environment—while also keeping the temperature comfortable for visitors.


Sensors that travel with art could collect environmental data throughout the transition and allow conservators to maintain a steady, safe climate for the pieces, says Paolo Dionisi Vici, associate research scientist in the museum's department of scientific research, who has been working with sensors for conservation purposes for many years. "Sensors are getting supercheap, with incredible performance," he says. "Using sensors could become the new standard approach to preventative conservation."

Wireless sensors have already aided the work of preventative conservators who work for Historic Royal Palaces, the organization that oversees the Tower of London and other historic sites in the United Kingdom that house precious artifacts. "We have about 400 sensors distributed around all our properties," says Constantina Vlachou-Mogire, Historic Royal Palaces' senior conservation scientist. The sensors track temperature, humidity and light (both visible and ultraviolet) around the environmentally sensitive art on display and in storage at the facilities. At the Tower of London, for example, a mesh network from Senceive monitors not only the art but the thick stone walls, since moisture in the walls could hurt the structure as well as the art inside.


The cost of wireless sensors varies—from $10 each to more than $100—depending on the number and type of sensors in each mote. Companies considering deploying wireless sensors also have to factor in the cost of readers, which can range from several hundred dollars to approximately $1,000 dollars, plus software licenses and installation fees.

New technologies, such as energy-harvesting devices, are making wireless sensor solutions more cost-efficient. In addition, technology providers are beginning to develop wireless sensor solutions that meet specific business needs. Some providers, such as Identec Solutions, package the hardware and software components together in a single platform, simplifying deployment.

There's been significant growth in the use of wireless sensors, because they are easy to deploy and can be put just about anywhere, says Hendrik Hamann, manager of photonics and thermal physics at IBM Research. "They enable applications that were simply not possible before."