The military uniform finisher is using EPC Gen 2 tags to reduce mispacks by 96 percent, and has cut shipping-related labor costs in half thanks to technology provided by SimplyRFID.

Nov 10, 2011Warmkraft, a Mississippi company that applies finishes to military uniforms, has reduced its manual shipping labor costs by 50 percent, while lowering its shipping–error rate down to 0.2 percent from 5 percent, by RFID-tagging its products at the item level after those goods are treated, and by then reading the tags prior to shipment. The system, provided by RFID technology firm SimplyRFID, enables the finishing company to ensure that the correct products are packed in cartons and shipped to the military per each order, and also to send advance shipping notices and receive payment two weeks earlier than was possible without RFID.

Warmkraft began tagging its products destined for the U.S. Air Force (USAF) in November 2009, as required by the military agency, and has now expanded the system to its two Mississippi facilities at which uniforms are treated prior to being shipped to the Air Force—as well as, now, the U.S. Marine Corps. The USAF's item-level RFID deployment was intended to help the U.S. Defense Logistics Agency track the receipt and issuance of uniforms at Lackland Air Force Base's recruit training center (see USAF Boot Camp Tracks Boots). Over the next year, says Ron Lack, Warmkraft's general manager, the company also plans to begin tagging uniforms destined for the U.S. Army. 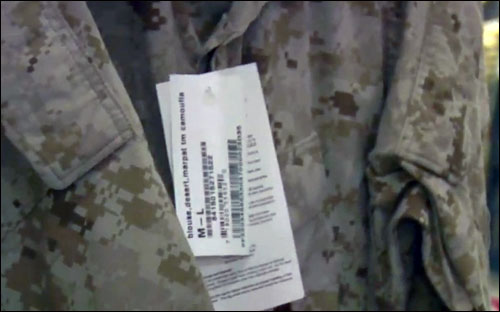 Warmkraft uses a Zebra R110Xi to print and encode its RFID labels, then attaches them to every garment.

The U.S. military receives uniforms from Warmkraft after the finishing company provides chemical treatments that include insect repellant, waterproofing and wrinkle proofing. Warmkraft receives uniforms from garment manufacturers, applies the appropriate chemical treatments, and ships the finished clothing to recruiting centers, where they can then be issued to soldiers. Prior to installing RFID, the firm depended on manual inspections to verify which uniforms were packed in which boxes, and to ensure that no mistakes were made before those cartons were shipped to fill military orders. In addition, regular audits were conducted on boxes just prior to their loading onto trucks, and if any errors were discovered in any of the audited cartons, the entire order would need to be manually inspected for additional errors before it could be transported. Ensuring that the proper items could be accounted for is especially important, Lack says, because the garments belonged to the supplier, and not to Warmkraft. "We process the goods," he states. "We don't own them. If they send us 1,000 garments, we have to account for 1,000 garments." 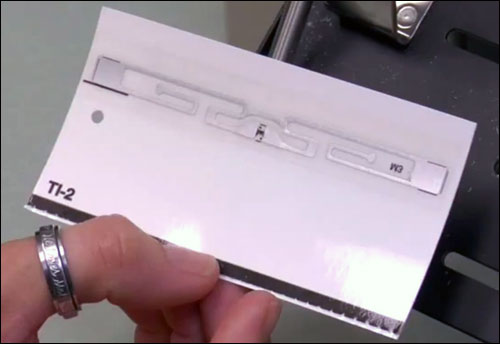 On the back side of each RFID label is an Avery Dennison AD-223 inlay.

Since Warmkraft was applying RFID tags for the USAF, the company chose to gain as much advantage from the technology as it could. Lack says his firm received installation assistance from one RFID company at its Taylorsville site. Then, when Warmkraft was ready to increase its tag-read speed on a conveyor system, as well as expand the solution's use to its second, larger site at Stonewall, it contracted for installation services and software from SimplyRFID. The first solution included RFID tags, readers and an Internet-based software system in which information was stored on a server hosted by the systems integrator. However, Lack notes, there were several shortcomings with this solution. For one thing, he explains, there were problems with reading the tags specific to the box being packed, and with ensuring that other tags in the vicinity (stray reads) were not captured by the system. What's more, he adds, the Web-based server was a concern, since a failure in Internet connection could potentially shut the RFID system down.


SimplyRFID provided its Nox software that resides on site and manages data locally, without requiring an Internet connection, says Carl Brown, SimplyRFID's president. In addition, the firm was able to program the software to detect whether a tag was, in fact, attached to a garment being packed and shipped, as opposed to a stray read. It accomplished this by requiring two reads of the same tag within a specified amount of time (from two successive readers on the conveyor), which would indicate that the tag was moving down the conveyor, and not, for example, simply sitting on a nearby table. 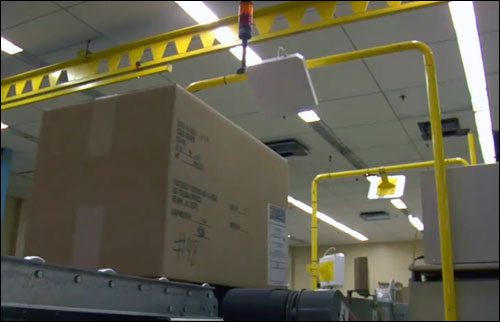 Cartons filled with RFID-tagged garments are placed on a conveyor, passing through two RFID portals that verify each carton's contents.

With the RFID system, Warmkraft's employees attach Avery Dennison AD-223 RFID tags to garments or their packaging after they have been processed and are ready for shipment. The company utilizes Zebra Technologies R110Xi printer-encoders to print the ultrahigh-frequency (UHF) passive labels. The Nox software stores the tag ID numbers of all tags, along with the stock-keeping unit (SKU) of the garments to which they were attached. The uniforms are then packed in boxes and stored within the warehouse for anywhere from one day to a month, while awaiting an order from the military. Once such an order arrives, cartons are removed from storage and placed onto a conveyor that moves the boxed items through two portals constructed using ThingMagic Astra readers. As each item's tag is read by both portals, the Nox software determines that it is, in fact, a valid tag (and not a stray read), and compares the ID number to ensure that it matches a specific order's SKU. If the software determines that all tag IDs match the order, a Zebra printer encodes and prints another RFID label that is then attached to the carton and is married to the ID numbers of all goods packed within that box. In the event of a discrepancy, however, a different, non-RFID label, marked "Exception," is printed using a Zebra 105SL printer, and is then placed on the box, flagging staff members to remove that carton from the order and rectify the problem before moving it back through the RFID system.

The cartons are then loaded onto a pallet and placed on a stretch-wrap machine, where another RFID interrogator captures each carton's tag ID number (the Nox software ignores the IDs of tags attached to individual garments). Once the system has confirmed that the proper cartons are being shipped, an additional RFID tag is printed for the stretch-wrapped pallet.


The software then sends an advance shipping notice to the military branch that will be receiving the order, along with billing details. Thus, when the USAF or the Marine Corps receives the shipment, military personnel read the tags themselves, and that data is stored in the military database, thereby verifying that the order is correct, and automatically authorizing that payment for the shipment be made to Warmkraft. Prior to the use of RFID technology, this step could take several weeks, as the military personnel needed to manually confirm shipment accuracy, and then provide paperwork to their own office, indicating that the proper shipment was received.

On occasion, Warmkraft's staff also employ a Convergence Systems Ltd. (CSL) handheld reader to interrogate pallet and carton tags at the stretch-wrap machine, or at the dock doors, in order to confirm read data. 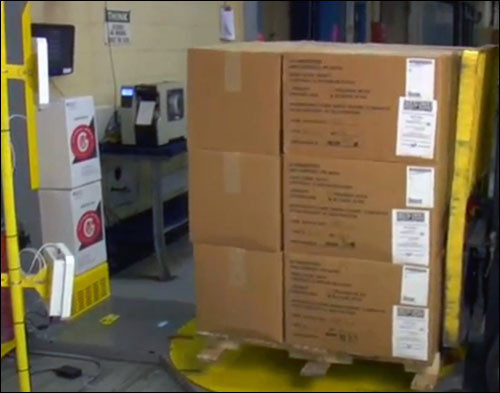 A pallet loaded with cartons is placed on a stretch-wrap machine, where an RFID reader captures each carton's tag ID number.

Lack says the results of the technology's deployment have been dramatic. "We like it a lot," he states. "It's a self-verification of our packing." Tag cost, he notes—approximately 15 cents each—is high for the large volume that the company uses. Typically, the firm purchases 1.5 million tags yearly, and that number will significantly increase, Lack adds, once the Army also begins requiring RFID tags. If the military were not mandating the use of RFID, he says, the company would probably not continue its item-level tagging, given the current high tag cost. "At the volumes we're doing, it's tens of thousands of dollars a year," he says, noting that the profit margin is low, since the company is not selling the garments themselves, but merely a service provided for each garment. "I don't think we could recover the [current] cost of the tags if we were doing this just for our own benefit."