Kinexon's SafeZone solution tracks each time workers wearing SafeTags come within close range, then alerts them in real time, while storing anonymous information so contact tracing can take place before infections can occur.

Jan 27, 2021Swiss engineering company  Oerlikon has launched an ultra-wideband (UWB)-based system to manage worker safety by providing proximity warnings and contact tracing in the event of a positive COVID-19 test result. The solution, provided by  Kinexon and known as SafeZone, consists of UWB tags worn by employees that transmit data to each other to detect their proximity, along with cloud-based software to manage the collected data, says Mehdi Bentanfous, SafeZone's managing director

Oerlikon employs 11,000 workers at 182 locations throughout 37 countries and is among the world's leading suppliers of surface engineering and manmade fiber processing technologies. After the COVID-19 pandemic began, the company piloted the SafeZone solution. The goal was to keep employees safe and production running, according to Ruediger Kretschmann, Oerlikon's Group's CIO. The company required a system that would warn workers to maintain a safe distance from each other, in order to prevent potential transmissions, provide contact tracing and protect employees' privacy. 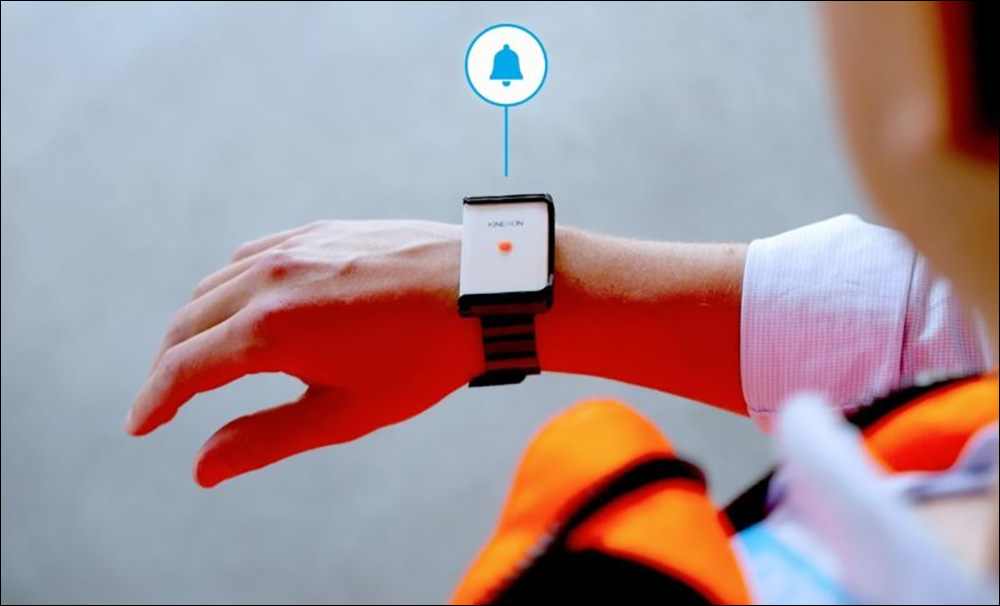 The system relies on sensor-to-sensor transmission between what Kinexon calls SafeTags, without relying on fixed infrastructure. "The underlying technology consists of very precise UWB data collection," Bentanfous explains, without requiring fixed anchors or readers. Each SafeTag has a unique ID number that is paired with another ID on a QR code, representing the employee wearing the tag. That link to the user's name is stored in a separate file by the HR department, and the data is used only for contact-tracing purposes in the event of a positive test result. The technology enables anonymity and privacy protection, Kretschmann reports.

As an individual wearing the tag goes about his or her day, the device transmits and receives transmissions to and from other tags in order to identify if two tags come within close range of each other. Each time a transmission is detected, the SafeTag forwards that information to the cloud-based server, including the distance between the tags, the date and time of contact, and the duration of contact. This back-end software data is captured, Kretschmann explains, for the sole purpose of enabling rapid contract tracing.

In the event of an infection, a worker reports that result to the HR department, which then contacts anyone whom the technology has detected as having been within range of the infected party within the past few days. Those who have been in contact can then be quarantined if necessary, in order to prevent further spread while enabling unaffected parts of the business to continue operating.

The system can be customized according to a user's individual needs. Oerlikon configured the solution to provide a phased series of alerts. "We are using four levels of alerting," Kretschmann states. First, the SafeTags will blink green when contacts breach the specified 1.8-meter (5.9-foot) safe distance. The device will continue to blink, first in orange and then red if this breach is not addressed. Eventually, a loud beeping alarm will be triggered if the safe distance is not restored. Oerlikon launched the technology as a pilot in June 2020 at two sites: one in Germany, the other in Switzerland.

For the pilot, employees wore 60 SafeTags as they went about their work at the company's warehouses. Following the pilot, the firm acquired 1,560 SafeTags, which are still in use at 11 locations throughout Europe and the United States. Beyond that, Oerlikon is rolling out another 6,000 SafeTags at an additional 90 sites around the world. "We have been gradually deploying the SafeTags at Oerlikon sites," Kretschmann says. "Including those in the final process of deployment, we will soon have a total of more than 7,500 SafeTags at 90 of our sites in Europe and the United States."

So far, the tracing functionality has been used only in a handful of cases, Kretschmann reports. "Leveraging the tracing data, we could promptly check with whom they had contact and act quickly in isolating only those with a high risk of being infected." The technology also serves as a reminder for workers to keep their social distance, he adds, which may help to reduce the spread of infection. "We are convinced that the SafeTags serve as a valuable tool to remind our colleagues to keep a safe distance, as well as to help us react faster and precisely when needed."

According to Kretschmann, the majority of the feedback that the company has received from personnel using the solution has been positive. They have found it easy to use, he says, and have appreciated that the company showed it cared for their wellbeing and health by providing them with the latest technology to ensure safe distancing and contact tracing. The system also enables users to filter the number of contacts being collected in the event of a positive test result.

For instance, the software can be set to track not only contacts related to an infected person, but also the contacts of those contacts, referred to as second-level contacts. Users can customize the parameters for warnings as well. Those on a manufacturing floor, for example, might require higher-volume alerts than those in offices. The SafeTag can operate with a battery life of around 20 to 24 hours, Bentanfous says, and the software is designed to be customized according to the environment. For instance, he explains, a manufacturing site has different requirements than a sports team or a film production company.

The system is being deployed to use only tags worn by personnel to capture and transmit data. The challenge of deploying anchors or other reading infrastructure is in enabling full coverage of an entire facility, Bentanfous explains. Most of those responding to the pandemic do not want to spend excess time and money to accomplish fixed infrastructure installation. The SafeZone solution is designed to be deployed easily and operable everywhere, he notes, and is currently provided to more than 250 companies worldwide.

Looking beyond the pandemic, Oerlikon is considering other use cases for the technology, such as collision protection for forklifts. "We had some internal discussions, such as using the technology as a warning tool to remind employees to exercise more care at specific areas in production sites," Kretschmann states. These are early-stage discussions only, however, he adds. "We have also done a few proof-of-concepts using Kinexon's RTLS technology across our businesses and are evaluating the results to see if there is a clear business case for further pilots."

The SafeTags can be built into wristbands or be worn on a lanyard or as a badge. In sports applications, the device can be integrated into players' uniforms, in shoulder pads or in sports equipment. The company hopes to eventually adopt a connected worker and smart factory solution to optimize and automate its processes, and it has already commenced POCs to accomplish this goal.