Sep 25, 2014The following are news announcements made during the past week by the following organizations:
Janam Technologies;
Farsens;
Harting;
IDTronic;
Trimble, ThingMagic; and
ams.

Janam Technologies, a provider of rugged mobile computers that scan bar codes and communicate wirelessly, has unveiled the XT1, a rugged mini-tablet weighing 13 ounces (370 grams), including the battery, and featuring a 13.56 MHz Near Field Communication (NFC) RFID reader, a 2D bar-code scanner and a Bluetooth 4.0 radio. The RFID technology supports the ISO 14443 and ISO 15693 standards, and can read passive high-frequency (HF) tags compliant with either standard. The XT1 is Janam's first device to support the Android operating system and, according to the company, is designed for both enterprise and government workers that require mobile functionality, such as those in field sales, field service, health care or hospitality. 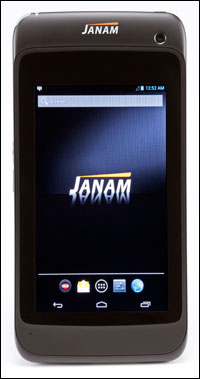 Janam describes the XT1 as a blend of cutting-edge technologies most often found in consumer phones with mission-critical key features that enterprises need, such as ruggedness, sealing, bar-code scanning and rapid battery recharging, among others. The result, the company reports, is a sleek, lightweight, rugged mini-tablet that delivers superior performance without sacrificing usability.

In addition to 4G-ready UMTS/HSDPA/HSUPA/GSM wireless area network (WAN) communication, the XT1 is equipped with a 802.11a/b/g/n dual-band Wi-Fi radio. It features an IP54 sealing to withstand rugged environmental conditions, according to Janam, and can also withstand repeated 3-foot drops to concrete. The device has a 5.9-inch WVGA TFT capacitive touch screen and optional 3G/4G WWAN technology (UMTS/HSDPA/HSUPA/GSM). The XT1 contains 1 gigabyte of RAM and 16 gigabytes of ROM, supports GPS, and has a motion-sensing accelerometer, a camera, a user-accessible microSD card slot, a 3.5-millimeter headset jack, a microUSB connector and a 3000mAh rechargeable lithium-ion battery.

Farsens, a Spanish developer of RFID sensors, has announced HygroFenix, a passive RFID tag that contains battery-free sensors for measuring relative humidity and temperature level. The ultrahigh-frequency (UHF) sensor tag supports the EPC Gen 2 specification, and is available in a variety of antenna designs and sizes to adapt performance to the required application in the 860 to 960 MHz band. The HygroFenix is designed for monitoring relative humidity and temperature in applications for which accessibility is restricted, or for which the use of batteries is not recommended. Applications include the monitoring of room humidity and temperature levels within a data center, the company reports, in order to enhance the life cycle of IT assets.

The tag's reading distance is around 1.5 meters (5 feet), Farsens notes, and it can be embedded in a wide variety of materials, such as plastics or concrete. It can also be encapsulated in an IP67 or IP68 casing for usage in harsh environments. The tag includes ST Microelectronics' HTS221 capacitive digital relative humidity and temperature sensor. The HTS221 can measure temperatures ranging from -40 to +120 degrees Celsius (-40 to +248 degrees Fahrenheit), with an accuracy of ±1 degrees Celsius in the range of 0 to +60 degrees Celsius (32 to 140 degrees Fahrenheit), according to the company. The sensor's humidity-measurement range, the company indicates, is 20 percent to 80 percent rH, with an accuracy of ±4.5 percent rH. Evaluation kits are available.

Harting has added new RFID-equipped housings to its line of Han high-power ruggedized (HPR) connectors designed to let users track data that they define about the unit, such as part numbers for requisitioning or purchasing replacements. Han HPR connectors are used primarily for external electrical interconnections in railway rolling stock and other vehicles, the company reports, in harsh environments and wet areas or where sensitive interconnections must be shielded. They offer protection against external physical influences, including harsh weather and extreme temperature fluctuations, as well as corrosive liquids such as cleaning chemicals or oils. The rugged Han HPR is designed to be impermeable to moisture, humidity, dust and dirt throughout the connector's useful life, and is built with materials and seals that are UV- and ozone-resistant and function within a temperature range of -40 degrees to +125 degrees Celsius (-40 to +257 degrees Fahrenheit).

The addition of the RFID capability, Harting reports, makes accessing configuration and parts information faster and easier, as companies track inventory and handle maintenance issues. According to the company, the Han HPR RFID connector features an embedded passive, ultrahigh-frequency (UHF) EPC Gen 2 RFID transponder with a read range of 1 meter (3.3 feet), 512 bits to 3300 bits of memory, and IP 68/IP 69 ratings, signifying that it is dustproof and waterproof (the locked housing also has an IP 68/IP 69 rating). The connector comes in four sizes. This is Harting's first connector with embedded RFID, and the company indicates there will be more RFID-enabled housings to come. 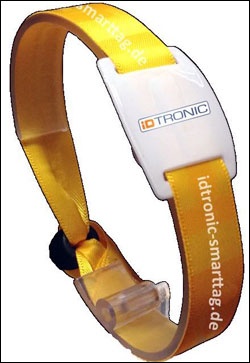 IDTronic, an RFID hardware provider based in Germany, has unveiled the RFID Single Use Wristband Soft, an RFID-enabled wristband designed for use in access-control applications at events, health clubs, recreational parks, hotels and fitness areas. The wristband is a woven band made out of soft PVC that protects the RFID chip. It features a specially designed closure that allows a wearer to adjust the wristband's fit. It is available in blue, red, black, yellow or green, and can be personalized via offset or silkscreen printing to add logos or other information onto the band via laser numbering. The waterproof wristband is designed to operate within temperatures ranging from -10 degrees to +50 degrees Celsius (+14 degrees to +122 degrees Fahrenheit), according to IDTronic. 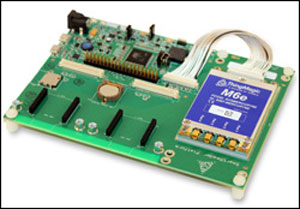 The Mercury xPRESS Sensor Hub is designed to enable companies to build the finished product for their specific use case efficiently and effectively. The sensor hub combines a microcontroller-based motherboard with ThingMagic's Mercury6e Series of RFID modules and an integrated software-development environment built on ThingMagic's Mercury C API. According to Trimble, the platform enables developers to bring up a fully functional RFID reader within minutes, and testing and proof-of-concept using sample applications from the software library can begin almost immediately. Reference design files allow developers to select the elements necessary for their particular solution, the company reports, and to advance rapidly to application-specific end-product design and development. The Mercury xPRESS Sensor Hub has been screened for regulatory compliance, reducing the cost and time required to secure end-product certifications.

Cygnus Information Technology Co., Ltd. has used the hub to develop a finished reader using its own interface board, according to Trimble. Jun-Mok Yang, the manager of Cygnus' overseas sales and marketing division, said in a prepared statement that "within a few months our reader was ready for the market and we were able to offer it at a competitive price. This quicker time-to-market allowed us to develop a reader that worked for our customers but was not limited in scope and function by other commercially-available finished readers that are at a higher price point. It was only by using xPRESS that we were able to provide a lower cost solution within a shorter timeframe." The Mercury xPRESS Sensor Hub is available now.

Semiconductor firm ams AG has announced its AS3911 NFC development kit and interface software stack, designed to provide a blueprint for a Near Field Communication (NFC) implementation in any microcontroller-based system. According to ams, many original equipment manufacturers (OEMs) would like to add value to electronics products by providing a simple, secure, wireless NFC interface between a microcontroller and the outside world. The AS3911 NFC development kit, the company claims, eliminates the need for an OEM designer to implement a complete, proprietary software interface between a host microcontroller, its operating system and the NFC reader chip.

According to ams, the software in the development kit includes an NFC Controller Interface (NCI) stack—a standard-based modular firmware/software solution that operates from the hardware level up to the operating system. Developed in collaboration with Stollmann E+V GmbH, the software stack manages the interaction between a microcontroller and any NFC high-frequency (HF) reader in the AS391x family of NFC reader chips, which ams launched almost three years ago (see RFID News Roundup: Austriamicrosystems Announces High-Performance NFC Reader IC for Payment, Automotive Apps).

The kit is compatible with the Android, Linux, and Microsoft Windows 7 and 8 operating systems, and the standard interface is suitable for any kind of NFC-enabled device, including routers, set-top boxes, automotive infotainment systems, consumer electronics devices and home appliances, according to ams. The NCI stack has a modular design, ams reports, so designers can select only those features and functions required by their applications, and the NCI supports all NFC protocols specified by the International Organization for Standardization (ISO), as well as providing extended functionality for proprietary card systems. It also supports the automatic antenna-tuning feature provided by ams' AS391x family. The NCI software stack is compatible with various physical interfaces, including UART, SPI and I2C.