A newly published study shows how tiny passive 13.56 MHz tags were used to measure the length of time it takes the insects to return to their hive, after being transported to a variety of locations.

May 25, 2011An international group of scientists have been employing tiny passive RFID tags to track how long it takes foraging honeybees to return to their hive from a variety of release locations. The team recently published the results of its research, conducted in Australia in 2007 and 2008 by Mario Pahl, a Ph.D. candidate at the University of Würzburg, under the supervision of Jürgen Tautz, a professor at the University of Würzburg, and ShaoWu Zhang, a member of the ARC Centre of Excellence in Vision Science and a professor at Australian National University (ANU), where the beehive was located, at the base of Black Mountain.

Using RFID tags and readers provided by Microsensys, Pahl was able to determine that bees utilize landmarks and skyline panorama to navigate their way to their hives. The flying insects were released from a variety of locations, with the tests measuring the rate at which they returned, as well as the distance from which they did so, depending on the release direction. After releasing the honeybees at increasingly greater distances from the hive, the researchers found that bees released from points east of the hive were more likely to return, and faster, than those released elsewhere, thus indicating the insects were able to follow landmarks with which they were familiar. Those released east of the hive—the researchers believe—were best able to use Black Mountain (located 1 kilometer northwest of the hive) as a landmark, and thus were best able to navigate back to their hive. 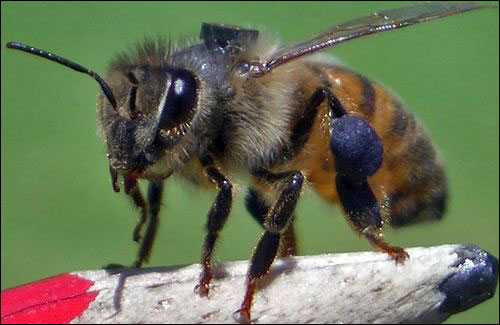 A passive 13.56 MHz RFID tag was glued to the back of each honeybee.

"Bees released in the east returned from a distance of up to 11 kilometers," Pahl says, while those released from the three other directions returned from maximum distances of 5 to 7 kilometers (3.1 miles to 4.3 miles).

The mission of honeybee foragers is to fetch nectar, pollen, water and plant resin for use by their colony. To navigate their way away from and back to the hive, they are believed to use flight maneuvers, circling in a series of arcs to orient themselves with their location. According to the study, they also memorize landmarks surrounding the hive, as well as along the route they take while foraging.

For the study, scientists captured pollen foragers that had recently returned to their hive and thus should have some experience with nearby landmarks. They then glued the RFID tags to the bees' backs (that is, the dorsal area of the insects' thoraxes) and placed them in a black box before transporting them up to 13 kilometers (8 miles), to various points at a variety of locations north, south, east and west of the hive. An RFID interrogator at each of two hive entrances captured the unique ID number of each RFID tag and stored that read data, linked to the date and time at which that read event occurred. This enabled the researchers to determine the length of time it took each bee to return to the hive, if it returned at all.

The group used mic3-TAG passive 13.56 MHz tags, complying with the ISO 15693 and 14443 standards, and measuring 1 millimeter by 1.6 millimeters (0.04 inch to 0.06 inch). Each stored a unique 64-bit number. The tags themselves, which weigh approximately 2.4 milligrams apiece, were just a fraction of the weight that honeybees typically carry in nectar (about 35 milligrams), Pahl notes, so they did not impede flying, though they may have caused a slight amount of wind friction. To tag the bees, Pahl and his colleagues first immobilized the insects by placing them on ice. The tags were then attached via shellac glue.


When each honeybee was tagged, the ID number of its tag was input into software running on a PC at the Australian site. The location from which that bee would be released was also entered into the software, and was linked to the unique ID stored on the tag being worn by that bee. The insects were then taken to the appointed location, the container was opened (the precise release time was input into the system), and the bees flew skyward in circles to orient themselves before beginning their journey.

The hive that the bees sought was home to approximately 3,000 bees, and was located indoors at ANU. To reach the hive, the bees had to walk through a 30-centimeter-long (11.8-inch-long) tunnel that allowed just enough space for the insects to enter individually. A Microsensys 2k6 HEAD reader was attached at the top of the tunnel, with two antennas spaced about two centimeters (0.8 inch) apart so that the researchers could determine whether each bee was entering or leaving the hive, based on the order in which the antennas read the tags. The tags' read range was approximately 3 millimeters (0.1 inch), and the tunnels were specifically designed to encourage each bee to enter with its RFID tag facing the top of the tunnel, where the reader antennas were installed.

Each time the tag was read, its ID number was captured by the reader. Researchers then manually compared the ID with the honeybee 's original release location, as well as the time that the bee arrived at the hive. The scientists found that bees traveling from the east not only were more likely to return, but did so faster (at a rate of approximately 50 meters per minute) than the other bees (which returned at an average of 25 meters per minute).

The project and the results are described in the study, titled "Large Scale Homing in Honeybees," published by PLoS ONE, a peer-reviewed online journal produced by the Public Library of Science (PLoS).

Pahl expects to conduct further bee studies, measuring the influence age and experience play on a honeybee's forager behavior, again using RFID, or possibly 2-D bar coding, which he says would have the advantage of being less expensive than RFID technology.

The software used to store bees' tag ID numbers and release locations was developed by Sebastian Streit, as part of the Beegroup, a working group headed by Tautz at the University of Würzburg. Streit developed the software in 2003, while a student at the school, for a project designed to demonstrate the advantages of using RFID to study insect behavior. For that project, Streit and three other University of Würzburg researchers, including Tautz, tagged bumblebees and tracked their movements using a setup similar to that later used for the Australian project.

Similar RFID technology has also been employed for other bee studies, including one involving a Queen Mary University of London researcher, Lars Chittka, who studied the diurnal activity of bumblebees north of the Arctic Circle, where summer brings 24 hours of sunlight. In this case, bees were tagged with Microsensys RFID tags, and Microsensys stationary interrogators read the tags as workers left the nest. Chittka's study, titled "Bumblebee Foraging Rhythms Under The Midnight Sun Measured With Radiofrequency Identification," was published in June 2010 by BMC Biology. Pahl was aware of the project and, in fact, says his group shared hardware with Chittka and his fellow researchers.