Jan 04, 2007Forget the kindly old woman wearing bifocals and sensible shoes. The newly constructed library at the Chicago State University employs a worker that more closely resembles Rosie, robot caretaker of the Jetsons cartoon family. The "librarian" is a giant robotic arm—part of the library's automatic storage and retrieval system (ASRS)—that stores and retrieves bins carrying library materials (books, CDs, DVDs and so forth) in a three-story storage room located behind the open stacks in the new $38 million facility. Here, only materials that predate 1990 are kept, while more recent materials are shelved in the open stacks.

The library's collection is comprised of 500,000 books and other media. Regardless of where an item is stored, it carries a passive 13.56 MHz Tagsys RFID tag. The ASRS uses those tags to sort the items. Moreover, the library's circulation system utilizes the tags to check items in and out, and the security system uses them to ensure they're not stolen. The majority of tags currently use a proprietary Tagsys air interface, but as the library applies tags to new items, or to older ones with failed tags, it will eventually use standard ISO 18000-3 tags from a variety of vendors. 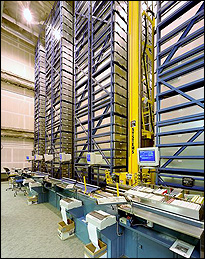 Automatic storage and retrieval systems have been used for years for material handling in such industries as shipping and automotive manufacturing, explains CSU dean Lawrence McCrank. Still, ASRS vendors have started working with libraries only in the past few years.

According to McCrank, more than 30 libraries now use ARSR for managing dated materials, though only a few have integrated RFID with the system. The others rely on identifying materials via bar-code labels, so the media must be manually scanned and placed in bins that the robotic arm can then store or retrieve. By integrating RFID interrogators into the ASRS, tagged books can automatically be sorted and stored.

ASRS is a popular storage mechanism for academic libraries, says Shai Robkin, president of Integrated Technology Group, the systems integration firm for the RFID and RFID-ASRS integration components of the project. The reason, he states, is that unlike their public counterparts, academic libraries do not weed out their collections over time. As such, they tend to have much larger collections that need to be stored. Integrated Technology Group worked with material-handling systems provider HK Systems, which installed the ASRS component of the project, to link the RFID architecture to the ASRS.

At CSU, a student or other patron returning a book, CD or DVD drops it into a slot that sends the item down a conveyor system. The first RFID interrogator stationed along the conveyor reads the item's ID encoded to the tag (the same number encoded to the bar-code label also affixed to every item and acts as failsafe in case the tag fails) and sends a message to the library's database that says the item has been checked back in. A second interrogator reads the item ID and sends it to a server that looks up the ID to determine where it should be stored. The server then sends a command to the conveyor system, diverting the item to either the first-, second-, third- or fourth-floor open stacks (where patrons can freely browse collections), or to the back storage area.

Library staffers in the storage area then sort the items by size, placing items of roughly the same size together into stacks. To store the books, they log on to a computer terminal and use an RFID interrogator, linked to the terminal, to read the tags attached to the books, CDs and DVDs in each pile to be stored. The robotic arm then retrieves a bin or bins to accommodate the items. The robot knows how many, how many items are in each bin and how many each bin holds. The bins come in a variety of sizes to accommodate various sizes of media, with some divided into six or eight storage compartments. For example, a stack of 12 hardcover books roughly 10 inches tall would be placed into the same bin. Once the books are placed in a bin, the employee confirms the bin number and, if applicable, compartment number into which each item was placed. (If media is part of a special collection the library wants stored together, a specific bin might be retrieved for that purpose.)

Once the books are stored, the robotic arm returns the bins to storage. The ASRS system knows the layout of the bins in the shelves and remembers where each is located. The inventory database, showing which items are in which bins, is constantly updated in real time while the items are put into storage, explains Todd Hunter, account executive with HK Systems. Hunter says he knows of no library outside of CSU that has combined an ASRS with an RFID system for automatic sortation. He notes that some school libraries, such as the University of Las Vegas, use ASRS and also RFID for identifying parts of its collection, but none have yet linked the two systems.

According to McCrank, CSU expects the new system to cut labor costs associated with material handling in half. He notes that justifying the installation of the ASRS system, which costs $1.7 million, was easy when one considers that the amount of books it holds equals an entire floor of open stacks. To build an additional floor of open stacks, the library estimated, would have cost an additional $9 million. Still, McCrank notes, the return on investment for the ASRS and RFID systems is greater than just labor and space savings—it's also in the library's ability to increase the quality of time students spend in the library by reducing the amount of it they spend searching for books in open stacks.

Studies performed by the CSU library show that to retrieve five books, a patron spends an average of about 2 hours (20 to 30 minutes each). Meanwhile, it takes the ASRS about 2.5 minutes to get that many books (depending on how many bins it must retrieve them from). When a patron needs an item that is not in the open stacks, he puts in a request for it, which a staffer in the storage area fulfills. The patron is then asked to pick it up at a circulation desk.

"For the users of the library, we want to decrease time in documents retrieval and increase time for document analysis," says McCrank, noting that the average age of CSU students is 25, and that they are usually juggling school and work schedules. "It's a twist on how business people think of a return in terms of profit."