Jul 29, 2013In-store advertising company News America Marketing (NAM) is now making its "SmartSource with NFC" service available for the Shelftalk signs deployed at the majority of NAM's network of 52,000 U.S. retail stores. To create the SmartSource with NFC program, NAM embeds a special Near Field Communication (NFC) RFID tag within a standard Shelftalk or Shelftalk Banner sign. The tag delivers branded media content onto an NFC-enabled smartphone or tablet whenever a shopper places his or her mobile device in close proximity to the in-store sign. NAM developed its SmartSource with NFC service with the help of NFC technology provider Thinaire.

The nationwide deployment follows a pilot in 2012 involving Kraft Foods (recently acquired as part of a new company known as Mondelez International), that took place in California, at five Bay Area supermarkets, to promote three Kraft products: Natural Cheese, Nilla Wafers cookies and Philadephia Indulgence cream cheese. The pilot consisted of the same technology now being released, including passive NFC RFID tags built into NAM's Shelftalk signs (which promote products) that direct NFC-enabled mobile phones or tablets to promotional offers and video about products. These offers include recipes and a download of Kraft's iFood Assistant application, available for Apple's iPhone, iPod touch and iPad, as well as for phones or tablets using the BlackBerry, Android or Microsoft Windows Phone 7 and 8 operating system. 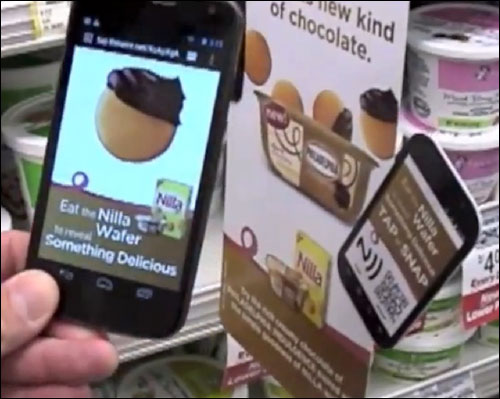 Thinaire was launched 13 years ago. Until 2004, it developed software solutions for e-commerce-based data management. More recently, the company began building solutions around NFC RFID technology, and it now offers what it calls the Thinaire Enterprise Suite—a platform consisting of software that collects, stores and manages NFC-related data for companies' marketing purposes. The software, hosted on Thinaire's server, is intended to provide users with social media, digital coupons and promotions, videos and music, as well as app downloads and games, using NFC technology built into mobile phones.

NAM provides coupon and promotional materials, typically printed on cardboard signs with Shelftalk logos, attached to store shelves. The two companies began working with Kraft Foods in February or March of 2012, recalls Tim Daly, Thinaire's cofounder, in order to find a new way to supply promotional materials to shoppers. The group chose to launch a pilot to determine how successfully promotional data related to Kraft's products could be delivered to consumers via their phones. The grocery store chain has asked to remain unnamed. Kraft Foods provided the promotional content and URL links that were used for select products at each store.

The pilot, which took place from Aug. 10 to 31, 2012, included five Shelftalk NFC-enabled displays installed in each store to promote Kraft's products. Because a limited number of consumers' smartphones are equipped with NFC readers, the displays included a QR code as well as Thinaire's NFC tag, consisting of an NXP Semiconductors NFC NTAG chip built into a Smartrac Circus tag.

Each QR code and RFID tag was encoded with an ID number and a URL for promotional materials related to Kraft Food's products. Thinaire provided the software link between the mobile phone reader and the promotional data that the user's phone could then access via the Internet. Daly declines to provide the number of shoppers who actually used the NFC RFID tag or QR code to access data at the stores, but says, "The numbers were way higher than anyone thought they would be." He reports that 92 percent of the connections were based on NFC rather than on the QR codes (the overall engagement level was 12 times higher with NFC, compared with QR codes).

To use the system, consumers need not download an app. A shopper can simply tap his or her NFC phone next to the Shelftalk signage, which instructs that person to "Tap or Snap." The customer then either views a recipe for the product or an invitation to select additional content about it. During the pilot, the solution also invited users to like Kraft Foods on Facebook, and to download the iFood app, which consumers can use to do such things as browse through Kraft's collection of more than 7,000 recipes, make shopping lists for any recipe selected, and locate the nearest grocery store. Of all the consumers who interacted with the Shelftalk displays, 36 percent took action, such as saving a recipe, downloading the Kraft app or sharing the brand socially.

At the same time, Thinaire software uses the data (what it calls the digital exhaust) related to the number of times that information was accessed at each store and each Shelftalk location, in order to provide business analytics to the brand owner. (Kraft did not respond to requests for comment for this article.)

The Kraft-based pilot, says Heidi Grey, News America Marketing's senior VP and regional sales manager, proved its ability to catch the attention of shoppers and cause them to linger in front of particular products at the store. "In fact," Grey says, "the shoppers spent approximately 48 seconds in front of the brand compared to the norm of eight seconds in grocery stores." That eight-second average is based on studies conducted by research consulting firm Integrated Research Associates. "The positive results were achieved without coupons or price reduction."

"As people start to learn more about what they have on their phone [that is, the NFC reader], their behavior related to this technology will accelerate," Daly predicts. With NFC, the phone can capture data by simply tapping a tag (rather than the more complicated procedure of photographing a QR code). "It's about taking the friction out of the equation," he states. "We're very excited. We feel like we're changing the world."

Thinaire charges an annual fee to the brand owners and other companies that use its system.

In a prepared statement for the press, Edward Kaczmarek, Mondelez's director of innovation and emerging technology, said, "Initial results from our pilot are very positive and set the stage for our 2013 brand efforts in mobile."