The new product combines the company's aluminum IDPlate design to withstand harsh environments with an RFID inlay that leverages the tag's own metal to boost transmission, with a range of up to 20 feet, whether on metal or non-metal surfaces.

Oct 31, 2018Metalcraft, a provider of industrial name plates and labels, has released a new metal UHF RFID tag that can serve as both a visual and digital ID plate for heavy equipment, vehicles and other assets and inventory typically found in challenging environments. The tag is made of anodized aluminum, can be mounted on metal and can transmit a signal in response to interrogations at a distance of 15 to 20 feet. The RFID system leverages patented technology provided by Technologies ROI (TROI).

The tag, known as the Metal RFID Tag, can be attached to equipment at oil and gas drill sites, to vehicles in outdoor lots, or to returnable metal containers. According to Austin Elling, Metalcraft's marketing director and inside sales lead, companies have often found such environments out of reach for RFID technology use, since tags would not survive for the duration of a tracked item's lifespan. 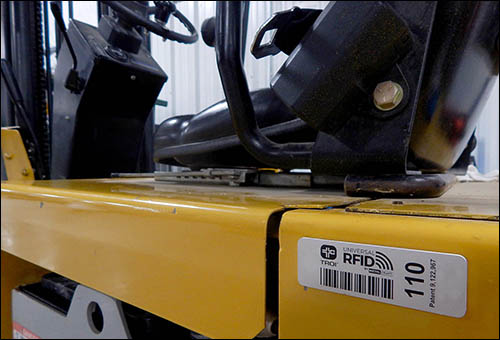 A Metal RFID Tag attached to a forklift

For visual and rugged identification, Metalcraft's customers use metal name plates that can handle exposure to chemicals, extreme temperatures and multiple washing cycles. "We've always been providers of durable name plates," Elling says. "As we evolved over the years, we've gotten into RFID as well." In fact, Metalcraft has increasingly found that its customers want to leverage the benefits of RFID to uniquely identify equipment, vehicles or containers. However, Elling reports, traditional RFID tags, including Metalcraft's own polymer universal tag, might not survive the extreme environments to which they would be exposed.

Despite that fact, Elling says, the company has seen significant growth in RFID product demand in recent years. That includes in the heavy equipment manufacturing and rental spaces, as well as for vehicle tracking. While Metalcraft could print data on a polymer tag to enable a standard RFID tag to act as a visual IDPlate, the information printed on it could be destroyed over time—for instance, by chemicals, washing or ultraviolet rays. "Customers had been asking for a metal name plate with an RIFD tag," he states.

Metalcraft has been working on a solution for the past 18 months, reports Mark Maliszewski, the firm's product-development engineer. The resulting metal RFID tag acts as a metal ID plate with RFID functionality. The tag consists of an Alien Technology Higgs-EC chip and a modified version of Metalcraft's Universal Micro inlay built into an aluminum plate measuring 1 inch by 3 inches. The plate can be attached to a metal or nonmetal surface via adhesive or some other method, such as screws or metal fasteners with nylon bushings.

The tag has a built-in reflector on its backside, and the inlay's antenna uses the tag's metal to send a transmission when interrogated by a reader. The metal surface to which the tag is attached serves as a reflector of the RF signal as well; if the surface is non-metallic, the tag's built-in reflector provides that function.

The metal tag's design extends the inlay's transmission length, which averaged closer to 8 to 10 feet in range for the traditional polymer version of the tag. "The name plate is acting as the antenna," Maliszewski says, and that extends the transmission range. The tag also comes with a photographically imaged bar-code and human-readable ID number printed on front. The ID can also be written to the RFID inlay, along with the encoded EPC number.

To date, the company has been testing the tags in-house, but it is now providing them in quantities of a few thousand to customers for deployment in the field. One of the most challenging environments is the oil and gas site, Maliszewski says, noting that the company expects it to function well even at that location, where washing, chemicals and heavy impacts are likely. The metal tag can sustain temperatures ranging from -40 degrees to +180 degrees Fahrenheit. 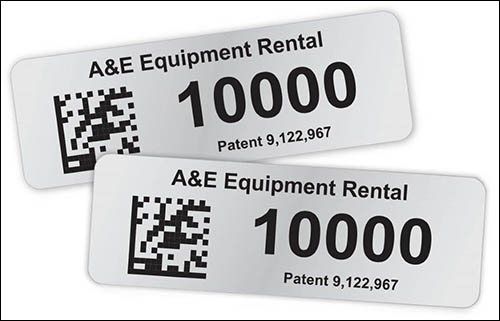 Many early deployments are likely to be centered around tracking reusable metal containers, Elling says. "That's where we have focused our pilots" in the asset-tracking area, he states. The metal tag is affixed to the side of a container, so that its unique ID number can be read via a fixed or handheld reader.

The benefit for logistics companies and shippers will be better inventory visibility into where their containers are located within large yards, or as they pass from one warehouse to another, as well as when they are loaded or unloaded. The metal tags could be applied to assets that are moved between worksites, such as rental equipment, and could be read as they leave from or arrive at a specific site, as well as during inventory counts. Moreover, the visible ID information printed on the front could be linked to the UHF RFID tag ID for both visual and digital identification.

Some of Metalcraft's customers have found RFID untenable in the past due to the tags' destructibility, Elling says. But now, he predicts, many of them may be able to launch their first large-scale deployments. "We see a lot of interest in adopting RFID by our traditional customers," he states. "This opens up doors for them to start incorporating RFID into their operations."