Mr. C Hotel Beverly Hills is using the RFID-based Linentracker system to track when its linens are sent to, and then returned from, an off-site laundry facility, and thereby determine if any items are not returned.

Aug 27, 2013Los Angeles luxury hotel Mr. C Hotel Beverly Hills ensures that its linens are onsite and available for use by guests, thanks to a radio frequency identification solution known as Linentracker, provided by Linen Technology Tracking. The technology helps the hotel monitor when its linens are soiled and shipped to an offsite laundry facility, as well as when they return, thereby identifying when any inventory ends up missing, according to Sam Jagger, Mr. C Hotel's general manager. By using the technology, he says, the hotel has reduced the rate of missing items from 20 to 30 percent of all stock to only about 3 percent. In so doing, he adds, the system has paid for itself since its installation in December 2011.

The solution consists of a Linen Technology Tracking EPC Gen 2 passive ultrahigh-frequency (UHF) tag sewn into every sheet, pillow case, towel, tablecloth and other linen, as well as Fluensee software to manage the collected read data and Jaspersoft's hosted server reporting engine. The Jaspersoft software enables Mr. C to set up and receive reports based on specific actions (such as when linens fail to return from the laundry as expected), and to conduct analysis of the culled read data, in order to better manage its linen inventory. 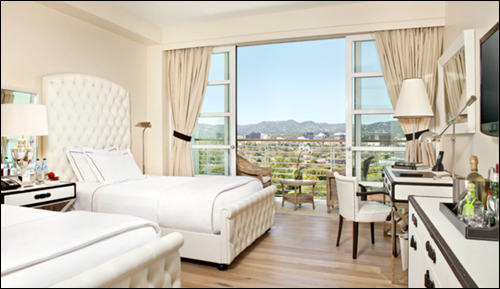 To manage its bed sheets and other linens—all specially made in Italy—Mr. C Hotel Beverly Hills sews a Linentracker RFID tag into every item.

Mr. C opened its doors in summer 2011, with 138 rooms, a pool, a fitness center and a restaurant—all of which require linens. The hotel, owned by Italy's Cipriani family, is the first of what the family expects to be a chain of luxury hotels under the same name, in such cities as Miami and New York. All linens are produced in Italy and are then shipped to the hotel, with a combined value of approximately $100,000.

Linen Technology's proprietary EPC UHF tags—designed specifically to be durable enough to function in the high-temperature and -pressure environment of commercial tunnel washers (see Linentracker Automates Management of Towels, Sheets)—are each encoded with a unique ID number. Each tag's ID is paired with data regarding the linen to which it is attached, including the type of linen and when it was manufactured. That information is then stored on the Linentracker server, hosted by Jaspersoft and using Fluensee software.

The specialized tags are designed for use in laundry applications. They can sustain up to 550 wash cycles with tunnel washers, the company reports, including the most challenging part of that cycle—the extractor, which creates the most pressure on tags by pressing the linens and their tags against the bottom of the washer as water is forced out of the machine.

The hotel installed three Alien Technology ALR-9900+ fixed RFID readers, with two installed above the laundry chute through which all soiled linens pass, and the third mounted at the housekeeping station where the linens are received from a third-party laundry service.

When the hotel first opened, Jagger says, workers tracked the linens manually. Every item was sent to an off-site laundry facility, and the washed and folded versions were counted upon being returned. Manually counting each item, however, was an exhaustive chore, and errors could be made. In addition, he notes, there were large discrepancies between the quantity of items that the hotel management thought was still at the laundry site, and what the laundry service provider itself reported.

Jagger found a new laundry service provider and selected the proper RFID-based solution to better track its linens' whereabouts. With the technology in place, as a linen is sent down the chute for cleaning, it passes a pair of ceiling-mounted RFID interrogators (two were installed for redundancy purposes in order to ensure a read), which capture each tag's ID number and forward that information to the server via a cabled connection. On the server, Fluensee software updates each item's status as soiled and thus unavailable for use.

When a bin full of clean linens is received from the laundry service, it is moved to the housekeeping station, where the tags are read again (the reader can interrogate tags from up to 20 feet away). The status is then updated once more to indicate that the linens are back onsite at the hotel and available for use.

In addition, the Jaspersoft reporting engine provides a variety of data to the user, who can access that information by logging into the password-protected Linentracker Web site. For example, says William Serbin, Linentracker's executive VP, a user can receive a shrinkage report indicating which items have left the facility and have not yet returned, thereby enabling hotel management to supply that information to the laundry service provider in an effort to locate those missing items. The system can also track the number of wash cycles that each linen has undergone, along with which ones may need to be removed from the linen pool.

By having a better view into specific linens' locations—onsite, at the laundry facility or missing—the company has been able to reduce the incidence of shrinkage, as well as require less inventory in storage, since it now knows what its existing levels of linens consist of. Typically, Serbin says, hotels have three identical linen items for each room or restaurant table: one currently in use, another possibly stored in a closet and ready for use, and a third being laundered. If the hotel can reduce that quantity by about a sixth, he adds, significant savings result. Moreover, the hotel no longer need pay for laundering services for goods that were never returned.

To date, Jagger says, he is pleased with the results. "First of all, it gives me peace of mind by seeing what is coming in and going out," he states. In the future, he hopes to use the collected data to measure the rate at which items are washed and then must be discarded, in order to make it possible to better forecast when linens should be ordered. "Now we can start looking for trends," he says. That kind of analysis can be provided by the Jaspersoft reporting engine, explains Karl Van den Bergh, Jaspersoft's VP of product and alliances. Fluensee recently announced a partnership with Jaspersoft, by which Fluensee's asset-tracking software is integrated with Jaspersoft's reporting engine, thereby providing Fluensee's customers with access to more than 200 types of potential reports from the Jaspersoft engine, as well as Jaspersoft's hosted server.

"By embedding Jaspersoft's self-service reporting and analysis capability within its application, Fluensee provides its end customers, like Mr. C, with the ability to easily create their own custom reports and dashboards," Van den Bergh states. "This leads to better and faster insight for its customers, like Mr. C, and lessens the burden on Fluensee's resources."