Vendors are responding to end users' needs by introducing interrogators designed for specific tasks and locations.

Jun 01, 2006In the beginning, there was an ultrahigh-frequency RFID interrogator and it was simple—a box with either an internal antenna or ports to connect two, four or eight external antennas. Whether you were reading tags on cases moving through a dock door or tags on small bottles of pills, your options were limited. But as early adopters began deploying UHF systems in the real world, they found boxy interrogators were less than ideal. They began asking vendors for RFID interrogators designed for specific applications. And the vendors have responded.

Wal-Mart has been one of the most aggressive companies in rolling out UHF systems, so it's no surprise the retailer has played a role in the evolution of RFID interrogators. The company worked with Matrics, a startup purchased by Symbol, to develop a hardened metal case that could be bolted to the floor on either side of a dock door, reducing the need to build special stands on which to mount reader antennas. The metal case also protects the interrogator and antennas from being damaged accidentally if hit by equipment in the facility. Symbol now sells the unit as the DC600 and DC400 Portal System. 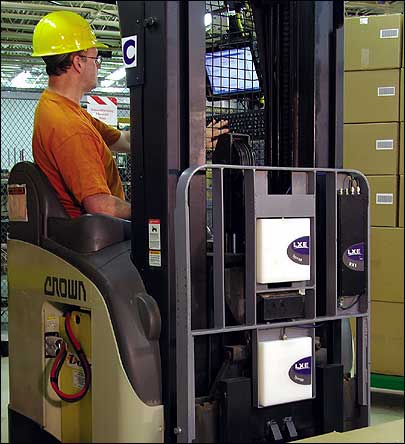 End users have also been eager for vendors to develop forklift-mounted interrogators, which can reduce the number of interrogators needed. Instead of mounting one interrogator at each of 100 dock doors to read tags on pallets moving in and out of a distribution center, companies can install one on each of 10 or 12 forklift trucks. 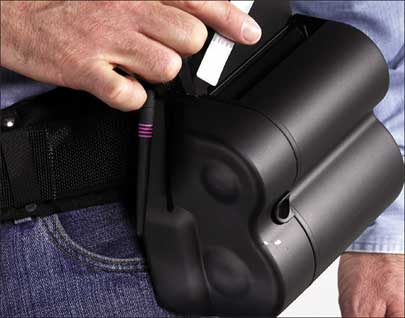 The PAD3500, with a compact battery-powered interrogator module, goes wherever workers go.

RFID-enabled forklifts also can be used in combination with location tags to track the movement of tagged goods. For example, Wal-Mart is planning a pilot at some of its Sam's Club stores in which forklift interrogators capture location IDs from tags embedded in the shelves holding the pallets. By associating the location tags with the Electronic Product Codes on the goods, Wal-Mart will see if RFID can help workers keep better track of tagged stock.

To help companies conduct a small RFID tagging pilot without purchasing smart label printer-encoders, a company called Adasa has designed a mobile interrogator that's worn on a waist belt. The device, called the PAD3500, has a compact, battery-powered interrogator module developed by SkyeTek, an RFID systems designer. It receives encoding commands from middleware via Wi-Fi, encodes each tag—as adhesive inlays, rather than printed smart labels—and then verifies that the tag was encoded properly before ejecting the tag into the user's hand. The PAD3500 could also be used by workers in remote or outdoor environments, where it would be difficult to install printer-encoders.


In its pilot program to track Viagra, pharmaceutical distributor McKesson is reading the HF tags on the bottles and the UHF tags on the cases, as product is brought into and out of the distribution center. But the company also wanted to be able to use RFID to monitor the drug while it was secured in inventory. So Blue Vector, the RFID solutions firm helping McKesson deploy the pilot, enlisted the help of Venture Research, a systems integrator, to build lockable cabinets for storing the Viagra. To read the bottles and cases, Venture Research built HF and UHF antennas into the cabinet shelves. The antennas link to Blue Vector's interrogator network appliance, which alerts McKesson to any changes in the cabinet.

Anticipating the day when pharmacists will need to read RFID tags on bottles to authenticate drugs, Integral RFID, an RFID systems provider, developed an interrogator mouse pad, which will fit easily into their working environment. The interrogator antenna, which sits directly under the pad cover, reads the newly developed near-field UHF passive EPC Gen 2 tags and conventional far-field tags, two options for item-level tagging. The mouse pad has a power cord and data cable, which plugs into a PC. 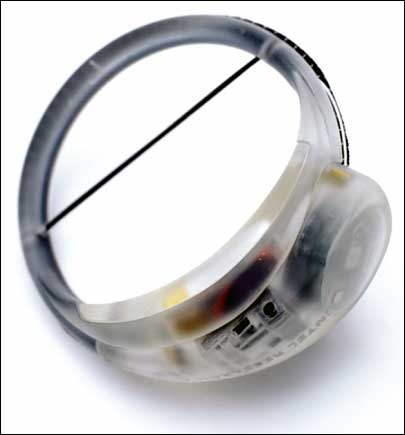 The ibracelet, an interrogator that fits around a wrist, can be worn by a worker in a manufacturing facility or an at-home patient.

Innovative interrogators aren't just being designed for use in retail and pharmaceutical supply chain applications. Researchers at Intel used a SkyeTek module to develop an interrogator that fits around a user's wrist. Dubbed the ibracelet, it could be worn by a worker in a manufacturing facility who's assembling a product using tagged parts. The ibracelet would read each tag and send the data to a back-end system. If the system deduced that product was being assembled with the wrong parts or in the wrong order, it could alert the worker. Similarly, health-care workers could provide the ibracelet to at-home patients to make sure they follow the instructions on their tagged pill bottles.

LifeFitness, a company that makes and manages exercise equipment, worked with Crossbow, a provider of wireless sensor networks, to develop a system in which an interrogator embedded in, say, a treadmill reads an RFID-enabled ID card presented by a health-club patron. The machine automatically adjusts the settings to those specified in the patron's profile. A couple of gyms are now testing the system.

Who's Who in RFID Interrogators