In its efforts to provide assistance to the earthquake-damaged nation, the U.S. Department of Defense is using 433 MHz active RFID tags to track supplies and equipment.

Apr 08, 2010Soon after a magnitude 7.0 earthquake struck Haiti's capital, Port-au-Prince, on Jan. 12, U.S. military forces arrived on the devastated island to provide aid. Due to the scale of the destruction and infrastructure loss, the only way to address the disaster was though a massive, months-long response. As part of its ongoing efforts to provide supplies to Haiti, the U.S. Department of Defense (DOD) is employing radio frequency identification to track shipping containers as they travel to and from the island. The tags are commissioned, read and tracked using the DOD's In-Transit Visibility (ITV) network, which the DOD utilizes for tracking materiel shipments all over the world, and which it last used in Haiti to track shipments in support of Operation Restore Democracy, from late 1994 to mid 1995.

Aside from the DOD's switch to 433 MHz active RFID tags complying with the ISO 18000-7 standard (see DOD Tests, Buys New ISO 18000-7 Tags From Four Companies), the RFID technology that the U.S. military uses has not changed significantly since the mid-1990s. Nonetheless, military personnel were able to deploy a reader infrastructure in Haiti much more easily this year than during its 1994 operation. This is because Savi Technology, the California-based RFID company that worked closely with the DOD to develop the ITV network, introduced portable deployment kits (PDKs) in 2005. Each kit contains an RFID reader, a mobile antenna and an Iridium 9601 Short Burst Data satellite modem (see U.S. Military Ramps Up Adoption of Satcom-RFID Kits), and makes establishing read points in the field a faster, simpler exercise than doing so without the kit. The PDKs provide a link to the Web-based ITV server through the Iridium modem. In 1994, military personnel often needed to locate phone lines to create an Internet connection to the server in the event that a satellite phone was unavailable. 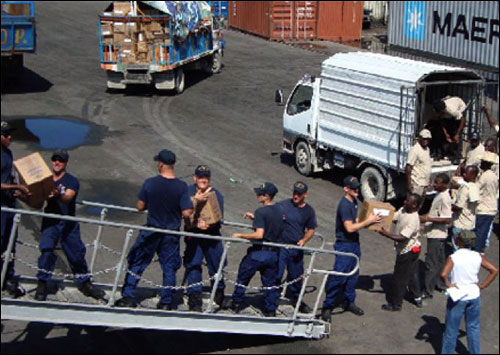 "From a commander's point of view, I'd say that the ITV was critical to the recent aid operations in Haiti," says Lieutenant Colonel Ralph Riddle, the commander of the 832nd Transportation Battalion, in Jacksonville, Fla. "This was a very complex mission, with a rapid deployment. It's something we don't do every day, but we prepare for every day. And the ITV network was absolutely critical [to its success]."

The military's Surface Deployment and Distribution Command (SDDC) facility, located in Jacksonville, is the main U.S. hub for aid shipments sent to Haiti through the ITV network. The SDDC worked with the Joint Task Force-Haiti, a collaborative U.S. military effort established by the U.S. Southern Command to oversee a unified response to the earthquake, in order to deliver aid.

On Jan. 20, a military ship carrying a team from the Jacksonville SDDC, led by Christopher Goss, the 832nd Transportation Battalion's chief of traffic management, arrived at Port-au-Prince. "We were the first responders for opening the [military supply] port," he says, though aid had already been arriving on the island via alternate routes and from other sources. When Goss landed in Haiti, the terminal lacked power, so he and his team set up generators to power the RFID tag readers, satellite communications and computer equipment necessary for logging onto the Web-based ITV network.


The next day, the team began processing the first shipments, which arrived in cargo containers from the Jacksonville SDDC facility. Savi's ST-654 active RFID tags, which operate in the 433 MHz band and comply with the ISO 18000-7 standard, had been attached to some, but not all, of the containers. This was due to logistical issues, Goss explains. Chief among them was the short window that the Jacksonville personnel had to load up and prepare the initial aid containers, which did not always allow sufficient time to attach, encode and commission an RFID tag to each container. In addition, the first loads of supplies that arrived at the facility from warehouses and military vendors were often not marked with military ID numbers, so the Jacksonville team would have had to assign IDs to the supplies and then create manifests, as well as link all this information in the ITV system and to the RFID tags attached to the containers.

But once the processes in Jacksonville were set into place, and after the SDDC crew in Haiti arrived and established logistics for receiving and processing aid shipments, RFID tags were attached to all cargo containers shipped from Jacksonville, and the supplies were then moved into Haiti efficiently. Water, ready-to-eat meals and medicine made up the bulk of the earliest shipments, with construction equipment and other large assets arriving later.

In Jacksonville, as supplies were loaded onto container ships, personnel built up a manifest in the ITV network, listing the items in each container. This process was performed manually during the beginning of the aid operation, Goss says. Due to the rushed nature of the operation, he explains, the supplies generally arrived without a military 2-D bar-code label attached. This meant that SDCC personnel had to manually key descriptions of the supplies into the ITV database. Once each container was filled, the team had to associate its manifest with the ID number of the RFID tag attached to the container, and ensure that the data was stored accurately in the ITV network. Fixed-position interrogators then read each tag as it moved out of the Jacksonville facility.

Goss notes that Jacksonville does not receive supplies by using passive RFID tags attached to cases or pallets of inbound goods. "Passive tags don't apply to our scenario here in Jacksonville," he said. "We scan 2-D bar codes, which dump the supply data into the ITV."

What's more, containers arriving at Jacksonville from other military sites sometimes already have RFID tags attached. The Jacksonville personnel can read these tags in order to call up the container manifests in the ITV system, and then note in the ITV database that the shipment had been received in Jacksonville and was being transported to Haiti. If the container does not have a tag attached, the team encodes and attaches one.


When a tagged container arrives in Haiti, a fixed-position reader installed at the port captures the tag ID number and pulls its associated manifest from the ITV database, so that personnel know what they're receiving. According to Goss, three handheld RFID interrogators are also used to locate specific containers, to receive containers in the event of power outages knocking the fixed-position reader out of service, and to perform a daily inventory of the tagged containers warehoused at the terminal.

"Does RFID help the operation? Sure. In looking up specific shipment information [or specific containers], it's helpful. But it's only one tool of the larger ITV network," Goss states, referring to the GPS, bar-code and other auto-ID technologies employed in the ITV platform. Furthermore, he adds, tracking containers via RFID helps military logisticians obtain a big-picture view of the type and number of shipments that move around the globe.

The Haiti terminal is now used more for shipping equipment and other military property from that country back to Jacksonville than for transporting aid to Haiti, Goss says, as the amount of basic aid supplies being shipped in declines. In total, he says, more than 3,000 pieces—a piece is any logistical unit, from a single pallet to a massive equipment item—have been shipped to that country.

From a logistical point of view, Riddle says, a number of lessons were learned from the Haiti aid mission. One important lesson is that those within the DOD who rely on the ITV network must take active ownership of its use, and embrace the role that RFID technology plays in tracking shipments. "What we need to reinforce is the mindset toward RFID," he states. "Nowhere is it more important than in [tracking] supply aid like this, because the supplies were absolutely critical to get it in quickly. Did we see a deterioration [of the tagging effort] in the front end? Yes, because we were moving so fast."

The first shipments arriving in Haiti had been loaded onto containers as quickly as they arrived from vendors or military warehouses—and, as noted, not all containers were RFID-tagged. According to Riddle, there is room for improvement when it comes to utilizing RFID and tracking goods moving through the military supply chain, because when tags are not attached to shipments at their point of origin, that creates additional work for personnel downstream. "We're all guilty [of missing steps in the tagging and tracking process], but you can't wish away the manpower that's needed to maintain the integrity of the ITV network, and that's a huge challenge in a rapid-deployment situation."