The manufacturer of the Fortune Duck brand of purses and bags is using passive UHF tags to track goods from the point of manufacture to the point of sale, raising inventory accuracy by nearly 10 percent.

Jan 27, 2014The Penta (China) Manufacturing Co., which manufactures the Fortune Duck brand of handbags, wallets, shoes and other leather goods, has increased its inventory accuracy from 90 percent to 99.9 percent, thanks to a radio frequency identification system that tracks each item from the point of manufacture to one of its own brand stores. Penta sells the leather products it makes not only through wholesale distributors, but also directly to consumers, via its retail locations in China and Hong Kong. The company owns and operates 37 retail shops that sell Fortune Duck merchandise, while three other stores are operated by franchisees. The technology is initially being used at only a single store, with plans to eventually expand the system's use to all branded stores.

In 2012, the Hong Kong company began looking into technological solutions to ensure that goods were always available at the store. Penta averaged approximately 90 percent inventory accuracy, with some goods ending up missing due to shrinkage before reaching the store shelf, while other items simply could not be located when needed. This 10 percent inventory inaccuracy ultimately led to a loss of sales when products were unavailable on shelves. The company was unable to determine at what point along the supply chain that merchandise went astray, and whether the losses were due to theft or error. To compensate for the inaccuracies, the firm opted to ship goods in higher volume, in order to provide safety stock to stores, but this sometimes lead to bottlenecks at the warehouse. In addition, the company found that some of its products were being sold illegally on the black or gray markets, which impacted the brand image. 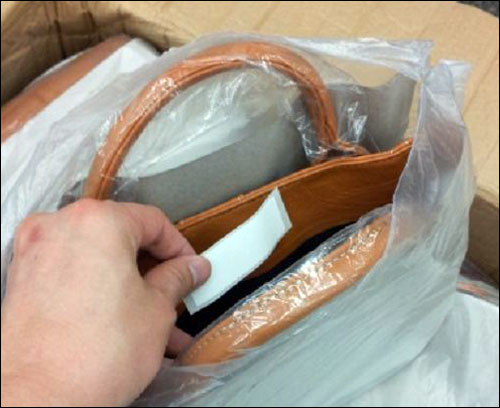 At Penta's factory, workers attach RFID labels to handbags, as well as to suitcases, wallets and shoes.

With a goal of addressing these problems, the company began working with Hong Kong IT firm QBS System Ltd., which developed a solution known as RFID ILT, designed to increase the visibility of goods from the point of manufacture to the store. QBS also provided project management and consulting for the installation, while Netage Software Development Ltd. supplied the software that captures and manages the RFID read data. Penta installed the technology in late 2012, and then launched a pilot in early 2013. The pilot consists of tagging all goods destined for one of the company's own Fortune Duck stores, and then tracking those items through the distribution warehouse to store shelves and on the point of sale (POS), according to Gary Wong, QBS System's general manager.

At Penta's factory, workers attach labels containing C&C RFID Co.'s CCU 1111-4 and CCU 1111-2 RFID inlays (made with Impinj Monza 4 and Monza 5 EPC Gen 3 RFID chips, respectively) to handbags, suitcases, wallets and shoes. Approximately 60,000 items have been tagged to date. In addition, around 100 C&C on-metal RFID tags were installed on warehouse storage shelves at the DC, to identify the location at which goods were stored. 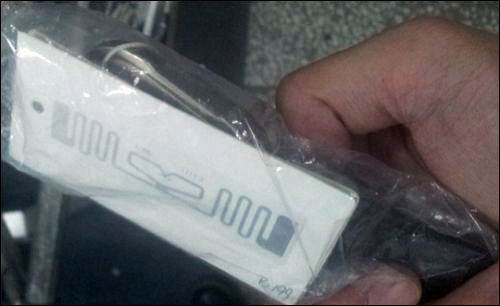 While tags are attached to goods at the point of manufacture, they are first read upon arriving at Penta's warehouse in China. The company installed Impinj R420 fixed readers at the warehouse's loading bay, as well as at the entrances and exits of storage zones. Handheld readers provided by Motorola Solutions are used at the store, as well as at racks within the zones, to identify goods and their location within the warehouse.

At the warehouse, as tagged items are received from the manufacturing site, the fixed reader captures each item's unique ID number and forwards that data to the Netage software residing on Penta's back-end system, thereby indicating which products have been received. Once the goods are put away on a warehouse shelf, their tags are interrogated via a Motorola handheld reader, and the tag attached to the shelf is also read in order to link those items with a specific shelf location.

When the warehouse receives an order for goods, a picking order is generated, indicating the location of goods within the warehouse. Workers carry handhelds while picking those products, and read the tags as they are packed to ensure the correct items have been retrieved. Those packed cartons are then loaded into trucks for delivery to the Fortune Duck store, where they pass through the Impinj fixed reader portal, updating the data to indicate that the goods have been shipped.

Store personnel equipped with the Motorola handhelds read each item's tag while unpacking the goods in the back room, thereby updating the store's inventory in the Netage software. Periodically, workers walk through the back room and along the sales floor to conduct inventory checks. 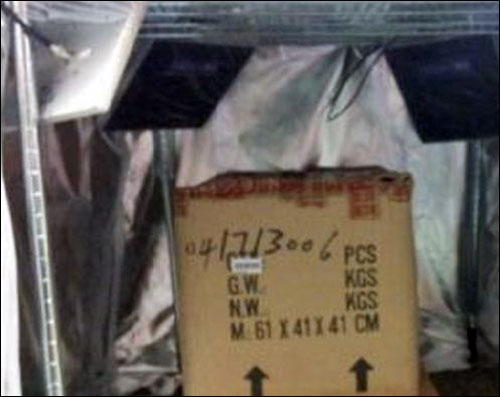 When an item is purchased, an employee reads and removes the tag, and the software is automatically updated to indicate which merchandise has been sold and, if necessary, trigger the reordering of stock. Not only has the technology boosted inventory accuracy, but it also makes the receipt and shipping of goods at the warehouse more efficient. According to the company, a box of 200 tagged items can pass through the reader portal, with all data captured, within five seconds—about 10 times faster than the previous method, by which personnel visually checked each item being shipped or received.

"Daily checking of display management at store level takes only minimal effort when a single operator can accomplish the RFID scanning task," Wong states. This, he adds, leads to fewer out-of-stocks and increased sales.

In the future, Penta intends to expand the RFID system's use to its other stores, and to include the distribution centers that receive goods to be shipped to third-party retailers. It also plans to integrate its RFID management software with the stores' own POS software. What's more, the company hopes to install RFID readers on shelves at some of its retail stores. Such smart shelves would be able to provide real-time information regarding the location and quantity of products in the store.