The Fraunhofer Institute for Circuits and Systems is extensively testing RFID in casings, facades and insulation, among other uses, to learn how the technology can improve pre- and post-construction.

Nov 25, 2008The Fraunhofer Institute for Circuits and Systems (IMS), a publicly and privately funded research institute in Duisburg, Germany, has just begun employing a commercial building it has constructed to test the use of radio frequency identification on construction sites, and for energy-efficient building operations.

In addition to RFID, the so-called InHaus 2 project relies on a variety of other technologies for constructing and operating energy-efficient, networked buildings. These include using lasers to create three-dimensional models of the construction site, as well as Web cams to compare those models with the actual site. It is an extension of the InHaus 1 project, in which Fraunhofer built a home on its grounds to test energy-conserving and in-home networking technologies, including RFID. 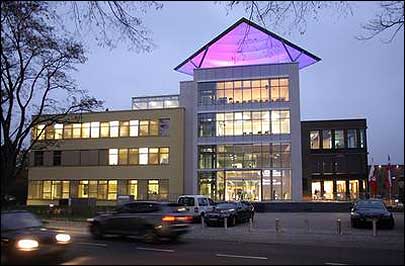 For the InHaus 2 project, the Fraunhofer Institute for Circuits and Systems is using a commercial building it has built to test the use of RFID on construction sites, and for energy-efficient building operations.

At the InHaus 1 site, open daily for the general public on an appointment basis, visitors can enter the home with an RFID-based or a fingerprint-based access control system. There, they can see, for instance, how an RFID-based medicine chest functions. If a visitor wants to watch a film on the television, she can utilize an RFID card to log in with her preferences and instruct the house's systems to create the proper conditions for her—for example, by closing the window shade, dimming the lights and switching on the TV. Finally, if a visitor wants to generate a shopping list, he can do so by using the touch screen in the kitchen to instruct the RFID reader in that room to inventory the kitchen's individually tagged food items. The computer system will also generate a recipe suggestion based on the ingredients on hand.

During the construction phase of the InHaus 2 project, Fraunhofer used RFID to track supply shipments, as well as to monitor air pressure in insulation panels. The institute wanted to test the use of RFID for providing proper and easy measurements of the pressure in approximately 25 panels, since changes in pressure affect a panel's ability to insulate. 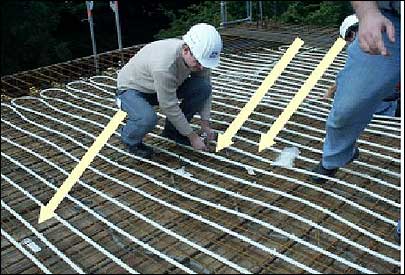 Temperature-sensing RFID tags were installed within the building's concrete ceiling.

To measure and track the pressure, researchers designed RFID tags that employ a Fraunhofer proprietary air-interface protocol and contain integrated pressure sensors. The researchers also designed a custom wireless RFID interrogator that it used to read the panels' tags. The RFID system enables a worker who has installed panels to prove he has done so correctly, without damaging them. The tags remain on the panels and can now be read by facility managers who want to double-check that the devices are functioning and are not in need of repair.

In addition, Fraunhofer also installed passive RFID tags with a proprietary air-interface protocol in the ceilings of the InHaus building. The 133 kHz tags contain built-in temperature sensors. The institute will test the tags' ability to help monitor temperatures within the building. Construction giant Hochtief was the main partner for the construction of the InHaus 2 site. The company agreed to cooperate with Fraunhofer's research projects during the building's construction, in return for the contract to build it.

Two Pilots in Material Tracking on the Construction Site


Frederic Meyer, who managed the RFID portion of the InHaus 2 project, says the goal of using RFID on the construction site for material flow management is to speed the flow of materials and make sure work days are not lost due to the proper materials not being on hand. In addition, Fraunhofer and Hochtief believe RFID can help manage the official safety documentation required by the state after certain building steps are finished, because RFID allows building components to be tracked after construction is complete.

In the first RFID project, which took place in spring 2008, researchers tagged 50 metal casings—frames used as molds when concrete is poured—with EPC Gen 2 tags to test the feasibility of employing RFID to track the flow of construction materials. The team chose to track casings because, although they knew the metal might interfere with RF signals, the frames are often in high demand, and occasionally the right types are unavailable for workers when needed. 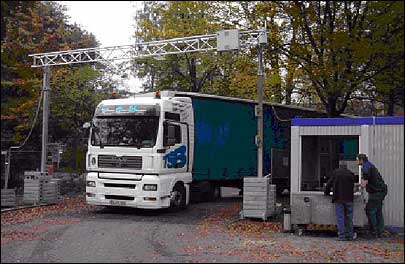 The 10-centimeter (4-inch) thick casings are rented from a subcontractor and delivered via truck, stacked 10 high. During the project, when a driver moved his vehicle through a portal erected at the construction site's entrance, a Feig Electronic RFID interrogator was used to read the casing tags. Researchers found that too much attenuation of the RF signal affected read rates; what's more, some tags could not be read because the designed read range was insufficient. During the month-long test, read rates averaged around 30 percent.

A second project at the construction site involved the tracking of facade elements with RFID. When facade elements are delivered, important information about them is manually written on a single paper label attached to each element. The labels, however, are often lost after the first time the facade is cleaned. Researchers tested the viability of replacing the label with an RFID tag containing a unique ID linked to the information in a database. For the test, the team placed EPC Gen 2 tags on facade elements, and on the crates in which they were transported, in order to track them during the transportation phase. They also applied a passive low-frequency (133 kHz) tag on the facade element's frame, for tracking the elements following installation. 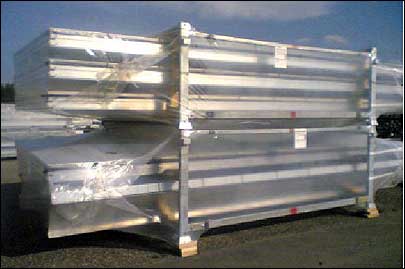 When a truck loaded with crates of facade elements passed through the RFID portal erected at the construction site's entrance, the portal reader interrogated the UHF tags. Once the facade elements were installed onto the building, workers could use a handheld RFID interrogator to identify each 133 kHz tag. The facade-tagging project lasted five months, Meyer says, during which time workers were able to read all tags with the handheld reader, as well as at the gate. In this case as well, facility managers can interrogate the tags on the installed facade elements to track their maintenance history.

The InHaus 2 project pulls together the work of nine separate Fraunhofer institutes. For instance, the Institute for Material Flow and Logistics, in Dortmund, supported the project with logistics. Some 50 industrial partners, as well as universities, are also taking part. With construction now complete, the three-story InHaus 2 building will be used for offices and labs for the Fraunhofer Institute, and rooms can be equipped for testing technologies relevant to the health and senior care sectors, as well as the hotel industry.

Hochtief says it hopes to utilize some of the technologies tested during the construction phase at other sites. In addition, the firm will be responsible for facility management, and be involved in further testing of equipment in the building until the end of 2010.

Hochtief invested €4.3 million ($5.6 million) into the project, and Fraunhofer spent €3.6 million ($4.7 million). Partly funded by the state of North Rhine Westphalia and the European Union, the partners spent a total of €26.2 million ($34.1 million) on the project.