The hospital reports that TempSys' CheckPoint solution has already paid for itself "a couple of times over," by reducing the amount of labor required to track temperatures within blood coolers and other units.

Jan 17, 2012Children's Hospital Colorado, located in the city of Aurora, is installing RFID sensors to monitor the temperatures of refrigerators, blood coolers, blanket warmers and other heating or cooling appliances within the new 10-story tower that it is currently constructing. Temperature fluctuation can have a damaging effect on such products as medications, blood or food, and can become a safety hazard, for example, if a patient were to receive food stored at fluctuating temperatures, or if a warmer had overheated a blanket. The temperature-monitoring solution, known as CheckPoint, is being provided by TempSys.

Five years ago, Children's Hospital Colorado first began deploying TempSys' RFID temperature sensors at what was then a brand-new facility. Currently, the hospital is using the CheckPoint system to track the temperatures of 641 heating or cooling units throughout its premises, every five to 15 minutes. During the past three years, the hospital has been able to utilize the technology to diagnose and reduce temperature fluctuations within the coolers and heaters, bringing the number of daily alarms from an average of 50 to 60 alerts per day for 400 units, down to 7.8 alerts daily for the 641 units. Additional cooling units are slated to be equipped with the CheckPoint solution as they are installed within the new tower, bringing the number of RFID-enabled units up to 850 by the end of this year, and 1,000 by the end of 2013, estimates Harry (Butch) Wilcox, the hospital's non-clinical equipment lead. 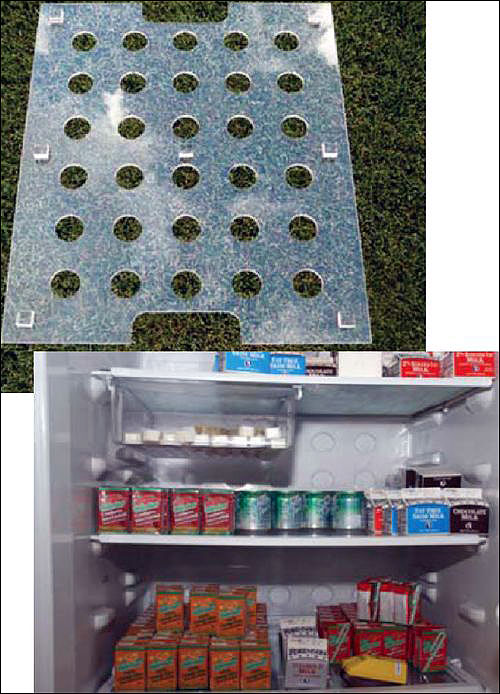 Thanks to the RFID sensor system, the hospital discovered that it could reduce temperature fluctuations within a certain type of refrigerator by installing a false plastic back.

The CheckPoint RFID sensor tags operate at 904 to 926 MHz, says Bob Yuan, TempSys' president and CEO, and deploying the system typically involves the installation of repeaters that forward tag transmissions to a gateway. In this case, however, the medical facility required a solution that would operate on its distributed antenna system, provided by Mobile Access, which can receive RF signals operating within the 400 MHz to 2.5 GHz range. The distributed antenna system, which was installed as the facility was constructed, provides Wi-Fi and cellular phone access throughout the hospital.

Children's Hospital Colorado first explored a temperature-monitoring system in 2006, at the same time that it built a new facility in Aurora. Though it considered using the CheckPoint repeaters—which the hospital wanted to install within its ceilings—the vast quantity of repeaters that would have been required, as well as the labor involved in installing them, would have been prohibitive. The hospital was already deploying the distributed antenna system to manage wireless data and cellular transmission, and thus opted to include the CheckPoint system on that backbone. TempSys' RFID sensors would transmit their own unique ID numbers, along with temperature or other sensor data, to the nearest antenna, which would then forward that information to the CheckPoint software residing on the hospital's server. Hospital management could then view the conditions at each cooling or heating unit, and an alert could be sent to them via an e-mail or text message in the event of a problem (such as a temperature rising too high or dropping too low).

The hospital then proceeded to install the CheckPoint RFID sensors, each with two AA batteries to power the sensors and transmissions (the batteries have a lifetime of up to two years). Each tag comes with a sensor probe that measures the temperature within a cooling or heating unit. TempSys also provided sensor tags to measure the humidity levels within the operating rooms, as well as the water level within a reverse osmosis (RO) tank used for laboratory work. 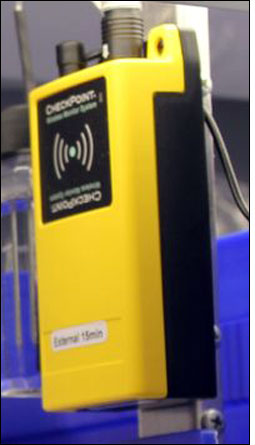 Each tag transmits its sensor data and unique ID at preset intervals—every five minutes for blood-temperature monitoring, and every 15 minutes for most other units. The tag data is collected by CheckPoint software, which determines whether the temperature range falls within the preset accepted threshold. If it does not, a text or e-mail message is sent to the appropriate individuals, and a red alert is displayed on the software dashboard. The information is also stored for review by hospital management.

Upon accepting his position at the hospital, Wilcox says he was told that the CheckPoint system was presenting the medical facility with so many alerts—50 to 60 messages daily for the 400 devices installed—that the hospital might have to hire additional employees to manage all of the adjustments and repairs necessary to address the temperature fluctuations. According to Wilcox, the CheckPoint solution made the hospital aware of "how erratic many of our refrigerators were during the course of a day." However, he says, he discovered that most problems were the result of a single cause: the overstocking or mis-stocking of foods or medications within a certain type of cooling unit. This overpacking, he found, prevented air inside the unit from circulating properly, thereby adversely affecting the temperature.

To resolve the problem, Wilcox designed a perforated plastic partition that could be installed within a refrigerator in order to ensure that products could not be placed against the back of the unit, where they could diminish airflow. He and his team also found that another type of refrigerator was not equipped with defrosting technology, thus affecting temperature control. To remedy this issue, the team installed defrosting switches within those units.

"When the hospital put this system in," Wilcox states, "they were more concerned with ensuring a safer product for kids [the hospital's patients] than with a return on investment." The frequent automated readings and alerts have provided that improved safety, he says, though he notes that during the three and a half years that he has worked at the facility, the system has paid for itself "a couple of times over," by reducing manual labor costs. While the nursing staff previously had to check temperatures within all cooling and heating units, and record the results once each shift, that process is now automated. The greater visibility into temperature readings, based on the CheckPoint system, also enables workers to identify and resolve problems before products become spoiled and need to be destroyed, or before a cooling unit requires replacement. "Really," he says, "it does the work of so many people, it's unbelievable."

The latest version of the TempSys tag is also equipped with a sensor that is placed within a cooling unit's doorway, detecting if a door has not been properly closed. TempSys also offers Fetch, an ultrasound- and RFID-based real-time location system (RTLS) that integrates with the CheckPoint system and is used to track the location of equipment, Yuan says. Children's Hospital Colorado, however, is not presently using the Fetch solution, nor is it deploying tags with the door sensors, though it may opt to do so in the future.