According to the publication's editor, there has been a lack of support from the very businesses that can reap the rewards of its high-quality, bilingual and transformative content.

When I implemented the IoP Journal project in 2019, some colleagues asked me, "Do you think you still have power to launch a new media at 52 years old?" My answer was a loud "Yes!" And today, at 55, I still have energy and vibration for new ideas as well. Implementing, changing, renewing and developing with eyes pointed to the future are skills that I cultivate, and that encourage me to work.

Thus, during the last four years—including throughout the painful COVID-19 pandemic—IoP Journal has managed to create a community of more than 750 followers on LinkedIn (by the end of the year, there will be more than 1,000), a weekly newsletter with more than 16,000 readers—growing weekly—and a bilingual website accessed by professionals from all over the world, from the United States to China, through Europe and Brazil. There's even a rising audience in Australia, which has become a strong consumer market for our content. 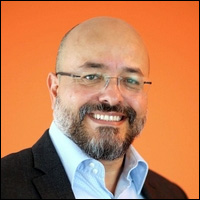 IoP Journal also has a powerful video channel on YouTube, with exclusive and numerous interviews, and a remarkable presence on other online social networks. In addition, its content is republished by the United States' RFID Journal, another important factor for internationalization.

Entrepreneurship is a personal characteristic of mine, which was already evident in my first years of life, when I became a young entrepreneur—at the age of six!—hunting and selling pigeons for Clube Paulistano de Tiro, in the north zone of São Paulo, and earned the nickname "Shoot the Pigeon." I will tell this story in detail in a book that is under production. Wait for it!

Yes, the joy of working and producing is within each of us, always. Just look and find. Each person in their own way, but we all have this strength.

IoP Journal was designed to serve a market that emerged from an evolution in the use of business technologies we started to notice—I and a group of executives—while I was still at RFID Journal Brazil, which I also pioneered in the country with the support of my dear former colleague and friend Mark Roberti, the founder and editor of the original American version of RFID Journal.

We noticed that automation technologies, such as radio frequency identification (RFID), were making room for new business opportunities, transforming not only supply chains and tolls, but also products' packaging and the way consumers interact with these products. Thus, we identified a growing and developing market, the Internet of Packaging (IoP)—packaging that can talk to people, strengthening ties between manufacturers and consumers. These ties had been almost eliminated with the end of the mass-culture model that existed before the Internet, until the 1990s.

Wow! I vibrated with the possibility of participating in another market transformation moved by technology, and I embraced the project with love and commitment. After all, my inspiration and entrepreneurship history had not been in childhood alone. It had already created, with its own financial resources, a small network of radio stations in the 1990s, using simple telephone technology, to bring daily journalistic content to the interior of São Paulo, Minas Gerais and Rio de Janeiro, including the capitals of the last two states.

I also acted to implement the Bandeirantes Radio & TV Network website, in 1996, a pioneer in the transmission of journalism by streaming in Brazil. And I had joined the team of an innovative technology portal as soon as the Internet started in Brazil, just before the "bubble" burst in 2000. I also helped Microsoft and Intel to computerize public institutions in that nation, such as the São Paulo Court of Justice, when I worked as a communications advisor.

I embraced IoP Journal and began to develop its content with the correct ethical journalistic criteria that I had learned, defended and helped to bring throughout more than 30 years to the present day, even when many journalists have gone through a credibility crisis due to mistakes made. I did international agreements and covered events held in the United States, Europe and Asia, internationalizing IoP Journal from the ground up.

The pandemic came in 2020, and a lot started to fall apart: agreements, projects and... words. A storm of hardship hit the entire world, including my company. I had to take funds from my personal savings account, in fact, to keep IoP Journal afloat. Still...

Analyzing the day-to-day, I know that much needs to be done to educate the market about the Internet of Packaging and continue building concepts and teachings. I also know that many companies can benefit from the IoP and make a lot of money. The main problem with IoP Journal today, as incredible as it may seem, has been the lack of support from the very companies that can reap the rewards of what we produce: high-quality, bilingual, business- and market-transformative content, with a strong educational content.

What's more, in Brazil it seems that people fear the success of their countrymen and may even destroy the work that would be useful to them, for the simple and unfortunate pleasure of not letting the other prosper. I sincerely hope that stakeholders are able to wake up to what they might lose before it's too late,

Edson Perin is the editor of IoP Journal Brasil and the founder of Netpress Books Editora, a pioneer company in the production and distribution of content to radio, TV and Internet, and the publication of books on technologies for business.