A physician will be able to read the embedded tag of a patient's implant, in order to identify the model, size and other details about that implant.

Oct 16, 2013Establishment Labs (EL), a manufacturer of medical breast and body-shaping implants, has begun selling some of its breast implants with a radio frequency identification tag built in, with the goal of providing information about the implant to a patient long after the device has been inserted into her body. The implants, containing passive low-frequency (LF) RFID tags provided by VeriTeQ, are commercially available in Europe. The first customer, a chain of U.K. plastic-surgery clinics, intends to announce its use of the technology next month. Until then, EL says, the clinic operator has asked to remain unnamed.

The full solution, consisting of tagged implants, handheld readers and a database in which records of the implants themselves are stored, along with their tag ID numbers, has been dubbed the Motiva Implant Matrix Ergonomix system. 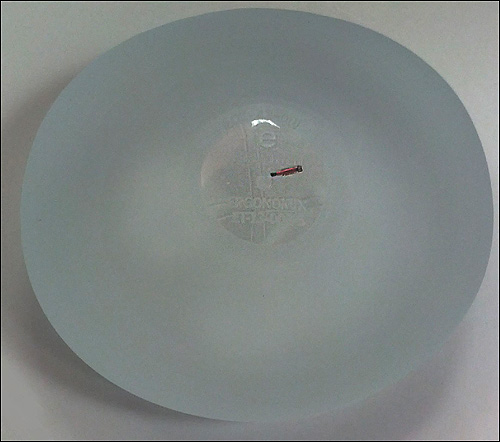 Establishment Labs is a four-year-old Costa Rican business with offices in Florida and Belgium. The company's CEO, Juan José Chacón-Quirós, says his firm was approached last year by Scott R. Silverman, the chairman and CEO of VeriTeQ, which sells RFID tags that can be implanted into a woman's body and then be read through her skin and body tissue, via a handheld reader. The idea of incorporating VeriTeQ's "Q Inside Safety Technology" tags into EL's products intrigued Chacón-Quirós, he says, since he views safety related to breast implants as being a concern to both patients and physicians.

For example, he says, if an implant is placed into a human body, that patient has no way to prove exactly which implant was used, or its make and model. This information can reassure her that an authentic implant was inserted, and could also be important in the event that any adverse effects occur. If a patient were to experience a problem with the implant years after the procedure, it could be difficult to determine the type of implant used, and thus its life span, the materials it contains and other details that can help in resolving that problem. Although doctors may maintain written records of the devices implanted into patients, tracking down that paperwork years later can often prove difficult.

If each implant contained an RFID tag, a doctor who needed to remove one could ascertain, prior to beginning the surgical procedure, the type of implant used and, therefore, how best to remove it. What's more, Chacón-Quirós predicts, a patient would have greater control over her implant, by having access to all available data about it, simply by visiting a doctor equipped with an RFID reader.

Establishment Labs is offering a full solution. Each breast implant comes with a tag embedded in the gel contained within. The company is also selling VeriTeQ handheld readers (designed to interrogate those tags' IDs) to plastic surgeons and other doctors who perform breast implant surgery. Finally, EL plans to offer a database hosted by a third party, allowing health-care providers with the correct password to access data regarding a particular implant, by reading its tag. That database will include such implant-specific information as the device's serial number, manufacturer, date of manufacture, lot number, volume and size.

Initially, the technology is being made available only in Europe, as a result of EL's completion last week of the European Commission's CE (European Conformity) mark process. A CE mark on a product signifies that the manufacturer has verified that the product complies with all relevant requirements (for example, health and safety or environmental regulations) laid down in the applicable directives—and, if stipulated in those directives, has had the product examined by an independent conformity-assessment body.

VeriTeQ's glass-encased passive RFID tag has been approved by the FDA for implantation in humans.

Having completed the EC's declaration-of-conformity process, EL can now market its Motiva breast implants to patients in 28 countries throughout the European Union. Establishment Labs is currently in the process of seeking regulatory approval from countries in South American, Asia and the Middle East as well, Chacón-Quirós says, and intends to seek approval from the U.S. Food and Drug Administration (FDA) to sell its solution in the United States, though the company has yet to begin that process. He notes that VeriTeQ's rice-grain-size tags (known previously as the VeriChip [see VeriChip Launches IPO]) had been approved by the FDA in 2004 for implantation in humans, but not specifically for breast implants. Chacón-Quirós hopes the FDA approval process will be relatively simple.

In September 2012, Establishment Labs began extensively testing VeriTeQ's RFID tags to determine whether they could be read through the breast implant material. The company also tested tag durability, to ascertain if the tag could survive the conditions to which it would be exposed, including liquids and high temperatures during implant manufacturing and sterilization. Since VeriTeQ's tags contain a passive 134 kHz RFID chip, compliant with the ISO 11784 and 11785 standards, EL was able to employ off-the-shelf handheld readers for its tests. However, Chacón-Quirós says, the firm will market VeriTeQ readers because they are designed to provide a very specific read range. The implanted tags, he explains, need to be interrogated within close range, and not at a long range, in order to protect a patient's privacy, and the VeriTeQ readers are designed to achieve that specific range.

Physicians and clinics using the technology would need to sign up for the Motiva service, and would then receive a password that they would enter in order to use the system. If a patient needs to identify her implant, her doctor would simply hold the reader near her skin, and the device would capture her implant tag's unique ID number. If the physician input a valid verification code, the reader could then access the Motiva database and display details about that particular implant.

Currently, EL offers RFID versions of only some implant models that it sells. However, Chacón-Quirós says, within the next 12 months, EL intends to provide the technology with any of its products, upon request. "We're a young, high-tech company," he states, "and we think this type of technology could benefit [consumers]." He says there will be a higher cost for the tagged implants (as opposed to those without tags), but adds that the price increase will be moderate (he did not provide specifics, however). "We're not making safety expensive," he says. According to Chacón-Quirós, the demand for safety information from patients will make the product desirable. However, he adds, he cannot predict how much demand there will be for the tagged implants, as well as the readers and the database to manage the collected read data related to those implants.

The most important point, Chacón-Quirós says, is that it empowers a woman to learn details about the breast implant (from her physician) whenever she requires that information. At the same time, because the data cannot be accessed without a verification code, a patient need not worry about privacy being violated. "It's important to let a woman know that her implant is safe," he states, "while respecting the privacy of the woman."

The technology, Silverman says, addresses concerns in the breast-implant industry, but in the long run could extend to all types of implantable and reusable medical devices. He notes that his company is now working with a vascular port manufacturer (a maker of a device that is installed beneath the skin and connected to a vein) to include Q InsideSafety Technology to identify the ports at the point of chemotherapy treatment.

"We also intend to partner with other breast-implant manufacturers, port manufacturers and other implantable and reusable device manufacturers to not only help them comply with the FDA Final Rule for Unique Device Identification, but, more importantly, to offer these organizations—and, ultimately, patients—an added safety and clinical benefit for medical devices," Silverman says.

On July 8, 2013, VeriTeQ completed a share-exchange agreement with Digital Angel Corp. As part of that agreement, Digital Angel is changing its name to VeriTeQ, and will also change its stock symbol from DIGA to VTEQ—all of which is expected to occur on or around Oct. 18.