Jan 10, 2011The University of Arkansas' RFID Research Center has opened its Arkansas Radio Compliance (ARC) Center to measure how well passive ultrahigh-frequency (UHF) Gen 2 RFID inlays can be read when applied on or around different materials in various environments for item-level tracking purposes. Based on the results of those tests, as well as a retailer's particular use case, the center will provide a list of acceptable inlays for a specific consumer product and use case to companies that supply goods to that retailer. ARC's goal is to make RFID tagging compliance easier and more standard among retailers that employ item-level RFID tags, goods suppliers that apply those tags to products sold by those retailers and inlay manufacturers that provide those tags.

The ARC Center, located next to the university's RFID Research Center, in Fayetteville, Ark., began testing inlays last year, during the first week of December. The facility features an anechoic chamber (designed to prevent RF signals from leaking through its walls) and a custom-designed tag-testing system from Voyantic that includes RFID test hardware mounted outside the chamber, as well as four reader antennas installed within the chamber. The chamber is designed for testing inlays in a variety of simulated environments, such as tags attached to apparel on hangers or stacked products, as well as from a variety of antenna angles. 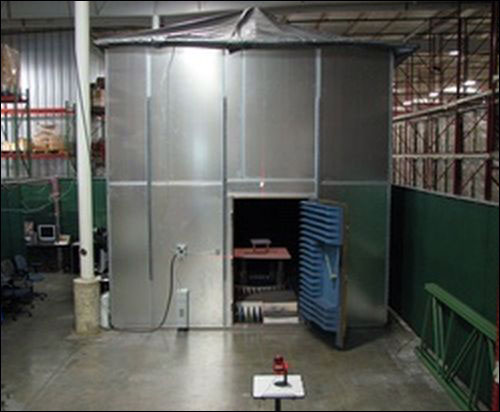 In addition to testing tags—which typically takes four to five days for a single inlay—ARC's staff can also assist a retailer by visiting stores to determine how it intends to use RFID, and then recommend the most appropriate inlays based on the benchmark testing as it would apply to that retailer's use case. Finally, the center offers the results of its testing on its Web site, including tag functionality under specific conditions, at no cost to goods suppliers. It will begin posting recommendations for specific use cases in spring 2011, according to Justin B. Patton, the RFID Research Center's managing director. In the meantime, he says, data regarding tag performance will be made available to participating inlay manufacturers upon request.

Initially, Patton says, the ARC program is being supported by nine leading inlay manufacturers, with each paying a $9,500 fee for the testing of several inlays of the same make and model. Those companies participating include UPM Raflatac, Avery Dennison and Invengo. Any further testing for new use cases conducted on the same inlay would be included in that fee—which may drop, Patton says, as additional inlay models are submitted for testing, and as new retailer use cases become available. Retailers and consumer goods suppliers will not be charged for access to the tag-performance data.

Currently, Patton notes, two retailers are participating in the ARC program, and several others plan to participate later this year, though he declines to name them. The initial use cases being tested on behalf of the retailers involve the tagging of denim jeans and undergarments. By March 2012, the number of use cases for tags being tested is expected to rise to about five and expand beyond apparel, though he declines to specify the details at this time.

Approximately three years ago, the RFID Research Center first began providing some testing services for retailers seeking the most effective RFID inlays for their item-level tagging use cases. Those tests, Patton says, gained the interest of inlay manufacturers seeking a better understanding as to the kinds of transponders retailers needed for item-level tagging with a variety of products. Since then, he adds, the RFID Research Center has been providing additional testing while preparing its new ARC Center.


The U.S. retail sector has some unique challenges that make standard recommendations for tags a good idea, Patton says. Retailers often sell large volumes of a variety of products, which means they are likely to require several makes and models of tags in order to handle all of the different products to be tagged. What's more, consumer goods manufacturers typically provide products to multiple retailers, so without standard recommendations, they may be required by different retailers to utilize separate RFID inlay models to tag the same product. "It's become necessary for a common standard for suppliers to adhere to," he states, "to make [the deployment of item-level RFID tagging] manageable."

By performing the testing and providing the results to retailers and suppliers, Patton adds, ARC can help "retailers understand their competitors' requirements without directly collaborating. No one wants conflicting requirements."

The ARC Center, Patton says, can also help tag manufacturers better understand the performance requirements sought by retailers, and improve their discussions with retailers regarding the tags needed. For example, he says, a retailer may inform inlay makers that a tag works fairly well with one product, but not so well with another. Using data provided by the ARC Center, the conversation could be much more precise, indicating the exact read percentage at a given angle.

The center's anechoic testing chamber—a steel-clad structure measuring 12 feet on each side—has foam spikes that reduce the reflection of RF transmissions. An inlay is placed on a rotating turntable in the center of the chamber, while the four antennas—one located directly beneath the center of the tag and parallel to the chamber's floor, the others oriented at an angle of 30, 60 or 90 degrees with respect to the floor—capture readings as the inlay turns. If necessary, the inlay is also tested for its ability to be read in close proximity with other tags (with multiple inlays stacked one on top of another). By early this year, Patton says, the test results will be posted on the ARC Center's Web site, and full detailed performance data will be sent to the inlay manufacturer.

If a retailer wants advice regarding a new RFID use case, the ARC Center's staff will visit that store, determine how the tags would be employed, compare that information with the results of the inlays tested, and then provide a list of appropriate inlays to the retailer and its goods suppliers. Those suppliers can access data directly on the ARC's Web site, Patton notes, or enter the lab and watch the testing process in person. "We want the suppliers to have detailed information, if that is what they want," he states, speculating that many may simply want a list of inlays appropriate for their products. "We are not ranking tags," he adds. "We're simply creating lists of tags that meet minimum performance requirements. This is designed so that the system is used for market development, rather than competitive rankings."

Currently, Patton says, the center is testing only unconverted inlays (that is, transponders not yet incorporated into RFID labels), simply because there are too many form factors to the converted tags to test them all. However, he adds, "If we start seeing ways that a converter affects an inlay, we may have to test converted tags."