With help from the University of Alaska, the DOT is evaluating how radio frequency identification can be used to track the amount of time that passes between the moment a truck is first loaded with asphalt and the instant the hot mixture is dumped.

Jan 14, 2011Having completed a pilot undertaken to track asphalt-carrying dump trucks as they travel from a weigh station to a road construction site, the Alaska Department of Transportation (DOT) is preparing a report to indicate how effectively RFID was able to gather information and issue alerts regarding the movement of those vehicles, as well as the benefits that data can provide. Based on anecdotal reports, says Jim Sweeney, a research engineer with the Alaska DOT, the pilot seems to demonstrate that RFID could reduce the amount of labor hours spent inputting handwritten paperwork regarding contractors' delivery of hot asphalt, as well as detect problems such as delayed deliveries, and issue alerts to project superintendents or foremen. Sweeney says he intends to request at least one additional RFID pilot, testing the technology in more remote locations where a cellular connection would be unavailable, before the DOT begins discussing whether to require that its contractors employ RFID for future projects.

The pilot, held from June 30 to July 17, 2010, with assistance from researchers at the University of Alaska, tracked asphalt-filled dump trucks from a weigh station operated by asphalt contractor Granite Construction, in Anchorage, to the Glenn Highway construction site, located about an hour's drive away. This involved utilizing an RFID solution provided by Canadian firm Minds Inc. that includes 900 MHz Identec Solutions active tags attached to trucks, as well as Identec readers installed at the weigh station and attached to a paver (a vehicle that applies hot-mix asphalt to a new road surface) on the construction site. 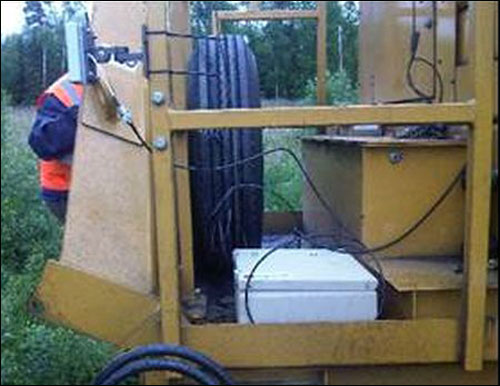 An Identec RFID reader and antenna were mounted to the rear of the paver.

The project, led by Oliver Hedgepeth, a professor in the University of Alaska's Department of Logistics, was initiated as an effort to find ways in which RFID could be employed to improve visibility at construction sites, when the DOT met with the Alaska University Transportation Center (AUTC), at the University of Alaska Fairbanks. AUTC often undertakes highway research for the DOT. Sweeney says he had been intrigued by an article he'd read on RFID Journal's Web site describing an RFID system for tracking logging trucks (see Loggers Use Tags to Track Trucks, Timber), and had wondered if the technology could be employed for other types of material as well. The pilot was funded by $45,000 from AUTC, as well as a matching $45,000 provided by Alaska's DOT.

Sweeney and Hedgepeth began seeking an RFID-based solution to improve the process of road construction within the state of Alaska. In March 2010, they contacted Minds Inc. regarding its PaveTag system, which utilizes radio frequency identification to track dump trucks carrying asphalt (see RFID Paves the Way for Road Construction). The PaveTag system is designed to track the movement of trucks from an asphalt plant to the paver, as well as provide e-mail alerts and notifications to a project's superintendent or foreman, based on such events as a truck's arrival or departure.

The Glenn Highway pilot used RFID to track a total of 50,000 tons of asphalt, laid along a 10-mile-long section of six-lane roadway under construction. An RFID reader was installed at Granite Construction's asphalt scale, located adjacent to the site at which the firm's asphalt production operation pours hot asphalt into the beds of dump trucks. Another interrogator was attached to Granite Construction's Caterpillar AP-1055 paver, located at the work site at which the asphalt was required, thereby enabling the users to track each truck's location twice—once at the scale, and again at the work site when the vehicle dumps its load into the paver.

"We chose to track asphalt because it is a high-value material," Sweeney states. The asphalt, which costs approximately $60 per ton, must be laid while still warm. If the mix becomes too cool before being laid, it will not set properly, and the road could thus experience cracks or other problems down the line. Therefore, the pouring of asphalt at the improper temperature could require the future removal of that asphalt and reconstruction work on the road. What's more, if a truck is simply delayed during delivery, the construction foreman might then reject the truckload—a potentially costly event for the contractor, or for the DOT.

Asphalt delivery is typically tracked manually, on paper. The time that the asphalt is loaded, as well as its weight, is written on a paper ticket that the driver hands to the DOT upon reaching the work site. Additional data is printed on the ticket by the DOT's staff, indicating when the asphalt was received. That paperwork is then collected for each delivery, and is later input into the DOT's system so that the agency can determine how much to pay each contractor. "That is subject to human error," Sweeney says, "especially when you're adding up 5,000 truck loads in a day." An RFID system, on the other, can electronically track that data, such as the amount delivered, the delivery time and the load's approximate temperature, based on how long it took from filling to dumping.

An Identec reader mounted on a pole near the entrance of the scale captured the RFID tag transmissions of a loaded truck.

During the pilot, Identec active RFID tags were attached (some via adhesive tape, others with metal screws) to the rear of 10 dump trucks belonging to various subcontractors, and the name of the trucking company was stored in Minds' back-end server along with each tag's ID number, says Curtis Kieres, the company's regional sales manager. The server stores information regarding each truck's movement, and participants could then generate reports and export data from the server in CSV format. Minds Inc. can also provide custom reports upon request, he says.

An Identec reader was mounted on a temporary pole near the entrance of the scale, in order to capture the RFID tag transmissions as each loaded truck was weighed. The reader was cabled to a PC, which forwarded that information to the back-end server via a GPRS connection, including the weight, time and date, as well as the unique ID number encoded to the tag. A PrintUp box—a device that received reader data and routed it to a printer—was installed by Intertiviti (which also provided additional consulting assistance and management for the pilot) within the weigh scale house, and was connected to the same computer at the scale. The printer produced a paper ticket that was printed (for redundancy of information) with details from the RFID-enabled weighing procedure, including the truck's identity and loaded weight, in addition to a time stamp.

The driver took the paper ticket and then began the approximately one-hour drive to the work site. Upon arrival at the site, the driver parked the truck near the paver, handed over the paper ticket and waited for the opportunity to dump the load. With the vehicle parked within 400 feet of the paver, the paver's reader began capturing the ID number transmitted by the truck's tags, and forwarded that ID to the Minds-hosted back-end system via a cellular GPRS connection. Once the truck finished dumping its load and left the site, the paver's reader could no longer detect the transmission of the truck's tag, and the system's software deduced that the asphalt had been dumped. In this way, Minds Inc. had data that it could then provide to Granite Construction and the DOT indicating how long the trucks waited at the weigh scale at Granite Construction's plant, as well as how long they remained at the construction site waiting to dump their loads.

The system worked well and provided accurate and reliable data, Hedgepeth says. Since the pilot's conclusion, he and his partner on the project—Morgan Henrie, an assistant professor of logistics at the University of Alaska—have been evaluating the data obtained from the project. Hedgepeth identified some interesting details among the RFID-read data, including anomalies in which it had taken some vehicles as many as four or five hours to complete the expected one-hour journey from the asphalt plant to the construction site. "There's some very interesting data to play with," he states. Henrie agrees, noting that the information could indicate whether the asphalt was stored at the proper temperature, based on the length of time required to deliver it. That data also has the potential to provide the DOT with a history of the asphalt delivered to the site. If a problem occurs and a company or individual files a claim against the DOT or a contractor, the RFID data could provide an exact record of when the truck was at a particular location, as well as how long it remained there.

The system offers potential benefits for contractors as well, says JR Eker, Granite Construction's project manager, since it could collect data regarding when vehicles are delayed. "For example," he says, "if a truck seems to be sitting too long at the paver," that could indicate that too many trucks were sent to the site in too short a span of time. "Based on that type of data, I could be more effective in my decision making."

Eker says he is currently awaiting the report from the DOT and the University of Alaska before determining how successful the system was, though he likes RFID's potential to provide greater details regarding truck location, and could imagine installing such a system for future roadwork, to better manage the vehicles and the dispatching of them. "I think we may have further interest in going forward [with installing an RFID system] on our own," he says, whether or not the Alaska DOT continues to utilize the technology.

Throughout the trial, the system sent approximately 145 e-mail alerts indicating each new event, including the completion of an asphalt dump, or the arrival on site of a new RFID-tagged truck.

If the DOT proceeds with testing the PaveTag system in a more remote location lacking a cellular connection, employees on the work site would likely need to use handheld RFID readers, rather than a fixed interrogator installed on a paver. In this case, the handhelds could store information and, perhaps, transmit the data to a server via a satellite connection. Such a pilot, however, has yet to be scheduled.