The school uses RFID to check out, check in and sort books, freeing staff to provide more research help to library patrons.

Aug 01, 2007The University of East Anglia (UEA) library, in Norfolk, England, has adopted an RFID book-handling system enabling it to automate most of its circulation services. This frees up the library's staff to provide additional research help to students and other patrons.

"Libraries are under pressures to improve or maintain their level of service, while reducing their expenses," says Andy Chadbourne, marketing and communications manager for Intellident. The RFID solutions provider and integrator, located in Manchester, England, developed and deployed the system. 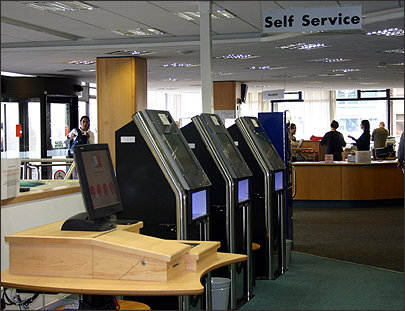 The library utilizes a fully automated system for accepting and sorting returned materials.

The Intellident system employs passive 13.56 MHz RFID labels—which use the ISO 15693 air-interface standard—attached to books and other media in the library's 700,000-piece collection. Intellident installed automated checkout counters that all patrons can utilize to borrow books. The counters are embedded with RFID interrogators made by Feig Electronic. To check out books, patrons can either scan their old bar-coded library card at the counter's built-in scanner, or hold a newly issued card with an embedded 13.56 MHz tag up to the RFID reader. Once the display screen shows the borrower's account information, the books or other media are presented to the RFID interrogator to be checked out.

What sets the East Anglia library apart from other RFID-enabled libraries in the United Kingdom, however, is its fully automated system for accepting and sorting returned materials. "We have been installing self-service checkout counters for more than three years," says Chadbourne, but this is the first RFID-enabled sorter we've installed anywhere."

Patrons can return items either inside the library during its operating hours, or at a book drop mounted on the building's exterior. To return items inside the library, patrons can place them, one at a time, at one end of a conveyor belt. A motion detector activates the Feig interrogator mounted alongside the belt, which reads the ID number encoded to the book's tag. The conveyor then starts up, propelling the item down a chute, which brings it to a sorting station.

There, Intellident software directs the conveyor system to divert the book into one of eight carts—one for each of the library's seven floors, and another for exceptions. A book belonging on the library's first floor, for instance, would be sent to the cart designated for that floor, while a high-demand book with a waiting list would go to the exceptions cart, from which staffers would retrieve it and contact the next waiting person. Sensors on each cart trigger an alert in the Intellident software, which interfaces with the library's back-end software. This software can then e-mail a message to staffers, alerting them to replace the full cart with an empty one and reshelve the books in the full cart.

When returning books to the outside drop box, patrons can read step-by-step instructions from a computer monitor mounted next to the box on the building's exterior. The chute is locked, preventing unauthorized parties from dropping garbage or other inappropriate items into the box. To access the chute, patrons must first present a library card, either to a bar-code scanner or to an RFID reader mounted alongside the drop box. The Intellident software collects the ID and compares it to a current database of valid cards.

If it finds a match, the system sends a command to unlock the drop-box door so the patron can insert the items being returned. A monitor instructs the patrons to insert items one at a time, then confirms when each item is successfully returned. Inside the chute, a motion detector, an RFID reader and the Intellident software operate in the same manner as in the interior book-return station, sending each item down the chute to its appropriate cart. 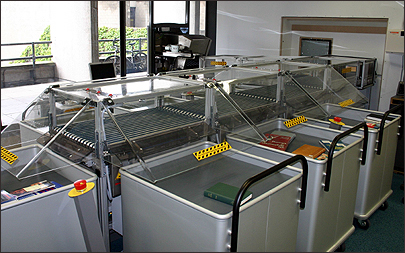 The conveyor system diverts the book into one of eight carts—one for each of the library's seven floors, and another for exceptions.

"At the UEA library, there are no staffers sitting behind desks to handle returns, or checking items out anymore," says Chadbourne. "This is a sign of change in library culture." He is quick to point out, however, that the library has no plans to reduce the size of its staff now that much of the circulation work is automated. "We are not replacing staff with this machinery. The library is just taking the staff's boring, monotonous tasks and replacing them with more meaningful customer services tasks," he explains.

The new system has been live for the past six weeks, Chadbourne says. The library does not expect students or other patrons to object to the transition to RFID-enabled library cards, he adds, as the read range of the 13.56 MHz inlay is just a few centimeters, and because no names or other personally identifying information is encoded to the tag.

Chadbourne declines to reveal the total cost of the system, noting that the library has not yet set any concrete timeframe for reaping a financial return. Still, he says, it expects marked improvements in its customer services and may be able to expand its hours of operation.

Chicago State University also uses an automated system that sorts items by reading attached RFID tags (see RFID Helps CSU Library Automate Sortation, Storage). Whereas the UES system uses just one read point to both check an item back into circulation and also sort it, the CSU system uses two separate read points for these tasks. Rather than utilizing ISO 15693 tags and readers, CSU's collection is tagged largely with tags from Tagsys, which use a proprietary interface. However, CSU is migrating to tags and readers compliant with ISO's 18000-3 standard for high-frequency RFID.