To Stand Out in the Field, Filter Manufacturer Adds IoT

Donaldson is offering its customers a means for remotely tracking the filters' lifespan, with the goal of keeping their operations flowing smoothly.

Oct 17, 2016Donaldson manufactures filtration systems used for a range of applications, including for filtering diesel as it is pumped into heavy-duty vehicles at remote job sites. In such use cases, ensuring that the filters are replaced in a timely manner is key, says Scott Grossbauer, the global director of Donaldson's Clean Fuel Solutions division.

"Mining is a huge market for us," he says, noting that a single haul truck can burn 1,000 gallons of diesel during a single (24-hour) shift. Because the operation never ceases, neither does fuel delivery. However, the quality of the fuel that is delivered to the sites and stored in large tanks (from which it is pumped into vehicles) varies, which means that there is no predictable pattern, such as the number of gallons pumped before a filter needs to be replaced, since a shipment of relatively dirty fuel will fill the filters sooner than a cleaner one. That makes it difficult for mining personnel to know when to change each filter, or to predict how many replacement filters will be required at any given time. 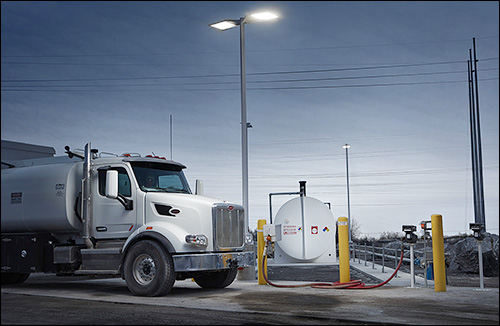 Fuel is delivered to worksites and stored in large tanks, from which it is then pumped into vehicles. (Photo courtesy ATEK Access Technologies)

Last year, a colleague of Grossbauer's suggested they set up a meeting with an acquaintance, Sherri McDaniel, the president of ATEK Access Technologies, a developer of machine-to-machine communication networks. Donaldson and ATEK are headquartered in adjacent suburbs of Minneapolis. The Donaldson employee knew that one of the solutions McDaniel's team sells is TankScan, a cloud-based monitoring system that fuel-delivery services use to schedule refills to their customers. Could ATEK develop a similar system to track the condition of Donaldson fuel filters?

"It was interesting to see what they were doing with connected products," Grossbauer says of the meeting, "and it became apparent to us that we could piggybank on that to monitor the pressure drop of the filter system."

As soon as a new filter is put in place, it begins to fill with dirt or other impurities as the fuel passes through it. Over time, this debris slows the rate at which fuel moves through the filter, and changes the pressure of the fuel exiting that filter. "When it gets to a certain level," Grossbauer explains, "customers can't fuel [a vehicle] within the same amount of time [as when the filter is new]. And eventually, it gets down to a trickle." That slow flow also slows down the operations of Donaldson's customer.

"You might be doing fine and suddenly your filter is plugged," Grossbauer says. "So the value proposition is to track [the pressure inside the filter] and to also look for trends" in the lifespan of filters over time, because the customer can then correlate filters with a short lifespan to a shipment of dirty fuel.

The early design of the solution that ATEK devised for Donaldson, which is called WaveLength, used pressure sensors that fit inside existing mounts for manual sensors in the manifolds leading into and out of the filter, so that pressure differences can be accurately tracked. But the production model "utilizes a differential pressure (DP) transducer," explains David Anderson, an ATEK program manager, in an email. "The pressure that is measured and read by the Wavelength unit is the difference between the high and low side pressures. For a filter application, the DP represents the amount of 'effort' the system has to push the fuel through the filter system. The higher the pressure reading, the more restriction exists, and [this] is indicative of the amount of dirt the filter has removed."

The DP is hardwired to a microcontroller attached to a cellular radio inside a ruggedized box mounted to the tank. The unit is powered by a battery.

Because there is no set schedule by which Donaldson's customers fuel their vehicles, WaveLength had to be designed to monitor the fueling system throughout the day, in order to determine when it should begin recording data. Every five minutes, the controller awakens the sensors and takes a pressure reading. If a system detects a rise in pressure, this indicates that fueling is taking place, and the sensors continue to monitor pressure levels until fueling is complete.

The data is sent via ATEK's cloud-based server, and is forwarded to Donaldson's customers via a web-based or mobile interface. Managers can set up email or text message alerts as soon as the pressure drops below a set threshold, indicating that the filters are beginning to clog and reduce flow rate significantly. They can then call personnel at the fueling site and ask them to replace the filters—even it is 3 AM and the managers are not on the job site.

Thus far, Grossbauer says, WaveLength is being used at a couple dozen customer locations across the United States, both as permanent deployments and, in some cases, as beta tests. Donaldson formerly announced WaveLength's availability late last month at the MINExpo show, held in Las Vegas.

Customers pay a single fee for the WaveLength hardware, as well as a year of cellular data service and a subscription to the WaveLength web- and mobile-based application. In subsequent years, the customers will pay only the subscription and cellular fees, which will be roughly one third of the first year's costs. (Grossbauer declines to provide the specific price, noting that it varies based on quantity.)

The product and service "[are] an opportunity for us to have different conversations with our customers," Grossbauer states. "We're usually talking about filter media with them—but this is about using information to drive efficiencies in their biz. Mining, just like oil and gas, is in a downturn right now, and so [the value proposition] is about how they can invest in technology to save costs. That's our message and it's being well received. It gives us a differentiation in the marketplace."