After a dramatic setback due to the financial crisis in 2008, the technology is showing signs of growth once again.

Jun 01, 2011Back in May 2008, RFID Journal published an article titled "Moving Forward—At Last." It suggested the market for radio frequency identification technology was finally starting to accelerate. One proof point was our annual conference and exhibition, RFID Journal LIVE!, which attracted 3,300 people, including many end users who were eager to explore the technology's potential to solve business problems or deliver business benefits.

But when the financial crisis hit in September of that year, many companies put investments in new technology on hold. RFID projects were either canceled or postponed, which caused RFID vendors to struggle. Some, such as Trenstar, went out of business. Others, such as Multispectral Solutions, Navis, OATSystems, Reva Systems, ThingMagic, XIO Strategies and Wirama, were bought up. And large, mainstream technology companies, including Hewlett-Packard, IBM, Manhattan Associates, Microsoft, Oracle and SAP, essentially stopped marketing in the RFID sector.

Now, the industry is beginning to recover. An analysis of the attendance figures and survey results from RFID Journal LIVE! for the years 2008 to 2011 shows how interest in deploying RFID is growing.

After the 2009 drop in attendance that resulted from the financial crisis, attendance ticked upward in 2010, though end users still exercised a great deal of caution. In 2011, the number of exhibitors declined, due to consolidation among RFID companies, but the number of attendees overall grew, indicating stronger interest in the technology among end-user companies. 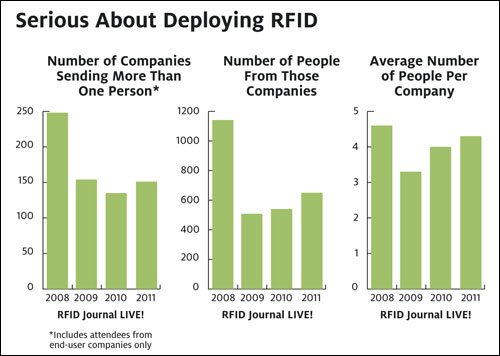 In addition to how often a company sends its executives and technology experts to the conference, the number of people a company sends indicates its commitment to the market and level of interest in RFID. The average number of attendees per company has begun to recover, indicating that seriousness about RFID deployments is returning to 2008 levels. 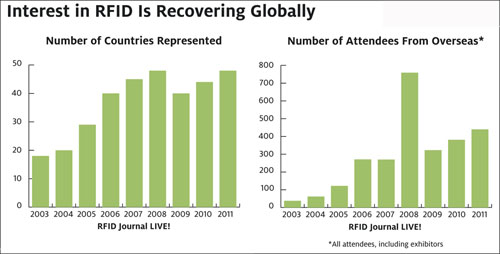 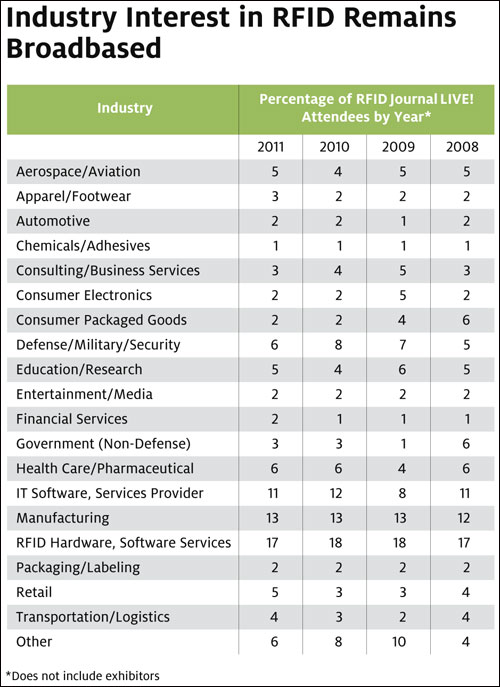 The percentage of attendees from different industries has remained fairly constant over the past three years. Apparel and retail saw an increase in 2011, reflecting the growing interest in item-level tagging. The government and defense sectors declined as a percentage of attendees in 2011, in part because concerns over a potential government shutdown caused some federal employees to cancel travel plans.

The percentage of paid attendees who said they plan to invest in RFID over the next 12 months fell in 2009 and 2010 but rebounded this year, indicating a growing trend toward adoption of the technology.