Researchers at the University of Bologna are building prototypes for bandages with built-in RFID chips and antennas so patients and doctors can capture data about the healing process based on moisture levels, without removing dressings and potentially disturbing wounds.

Dec 07, 2021European researchers have developed an RFID-enabled smart bandage intended to wirelessly transmit data regarding the healing process of a wound, based on moisture levels, thereby reducing the need to remove a patient's dressing and physically inspect the injury. The smart bandage, developed at the  University of Bologna, consists of what the researchers call moisture-level sensing material, a built-in UHF RFID chip and antenna woven into the bandage's fabric, and off-the-shelf FID readers using impedance measurements, via RFID transmission, to determine the amount of liquid present and, therefore, the wound's health.

The group is developing prototypes that can be 3D-printed and built into commercial bandages. The researchers are also testing the system with Near Field Communication (NFC) technology so users could employ a smartphone instead of a dedicated RFID reader to capture data wirelessly. In the long term, says Beatrice Fraboni, a University of Bologna physics professor, the group hopes to work with technology companies to commercialize the solution, and to gain approval to begin testing it on live patients.  Fraboni and her colleagues published  an article about their research at Frontiers in Physics. 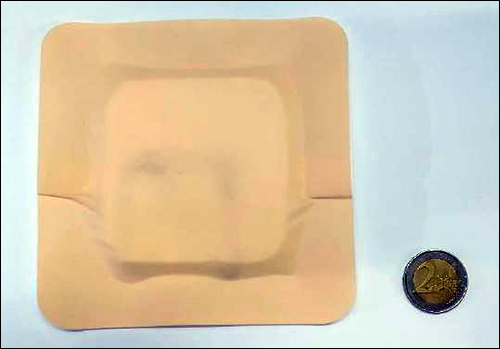 So far, Fraboni says, "The group has developed a range of bandages with various layers and different absorption properties and characteristics," which could vary depending on a person's specific wound and healing requirements. For instance, a burn's healing process would be monitored differently than a surgical incision. Some moisture is necessary for a burn's healing process, whereas moisture from an incision could indicate a potential infection.

"'The idea is that each type of wound could have its own appropriate dressing," Fraboni explains, "from slowly exuding wounds to highly exuding wounds." Traditional wound treatment often requires that doctors and patients go through the disruptive process of unwrapping a wound to physically inspect it. Removing a wound's dressing can often tear the healing tissue and cause damage, and this kind of examination can also be time-consuming for a patient, who typically would need to visit a doctor to have the wound checked.

The research group was focused on building a solution that would include a wireless smart textile. The bandage is made of a conductive polymer known as poly(3,4-ethylenedioxythiophene) polystyrene sulfonate (PEDOT:PSS), in a layer that is screen-printed onto gauze and can be used to identify changes in moisture levels. An RFID chip is connected to two antennas woven through the fabric. The group's design and engineering efforts included employing a layer of material that could absorb and remove liquid once moisture was detected, so that the next reading would reflect the current moisture conditions.

The smart bandage system operates by monitoring impedance variations based on the response to interrogation by an RFID reader. The impedance changes, depending on the antenna's dry and wet states. The group designed the system so that a reader's settings could be adjusted to detect the appropriate sensor values, based on the amount of impedance, for optimal healing depending on a variety of wounds. Developing the system began with choosing the materials, Fraboni recalls, which the group wanted to be biocompatible, disposable and inexpensive.

PEDOT:PSS, Fraboni says, suited those requirements. Because it could be screen-printed onto two different types of gauzes—gauze rayon and gauze PET—the material reduces potential manufacturing costs and the energy demands related to manufacturing, she notes. The conductive polymer is printed in the form of a line through the middle of the gauze, along with two stainless steel conductive threads sewn onto the conductive coating, which act as the RFID antenna. The chip is encoded with a unique ID number that is transmitted when interrogated by a reader.

If the technology can be printed directly onto the gauze, Fraboni explains, the cost and environmental impact of fabrication can be reduced. The standard fabrication process of depositing a semiconductor into the sensor device, for instance, that is used for RFID tag building, can be eliminated, as can the chemicals and energy used. In a typical use case, a doctor could apply the bandage to a patient's wound, then send the patient home with a borrowed handheld UHF RFID reader, with firmware and settings specific to that wound. In that way, for each patient's needs, the threshold could be set at which an alert might be sent to physicians.

Patients would follow instructions to interrogate the RFID tag built into their bandage at specific intervals, such as every eight hours. The data would be captured by the reader and could be displayed on the device's screen for the patient, while also being transmitted to the healthcare provider via a cellular connection. The bandage's unique ID, linked to that patient, as well as the impedance-based sensor reading, could thus provide the doctor with information indicating how that patient's wound is healing. 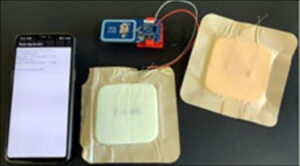 While there are already some RFID systems commercially available that can detect moisture in specific applications, such as monitoring diapers in hospital environments and detecting leaks in automotive systems, the smart bandage is designed to be more sensitive, Fraboni says, detecting moisture in levels of between 5 and 20 microliters (0.0003 and 0.0007 ounce).

The researchers are now working on a prototype, Fraboni says. The plan is to build the moisture-impedance sensor directly into a commercial bandage, in order to provide wound-healing management. The next prototype is expected to involve an NFC version of the bandage that could be interrogated by a smartphone. The researchers hope to work with technology companies that could bring the product to market commercially.