The company's system would allow radiologists to inject a passive RFID tag into a patient's breast, to help a surgeon locate a lesion during a lumpectomy.

Dec 28, 2009SenoRx, a provider of breast cancer treatment and diagnostic equipment, is working to introduce an RFID-based system that will offer radiologists a new method for marking a tumor's location prior to surgery. The solution, according to the company, promises to reduce the risk of infection, while helping surgeons to locate lesions more accurately.

Typically, a breast cancer patient goes through a one-day process in which a radiologist finds the tumor and then marks its location by inserting a wire into the lesion, so that one end of the wire protrudes from the breast after insertion. The radiologist then utilizes ultrasound, stereotactic or mammographic guidance to ensure that the tip of the wire is within the tumor's center. The surgeon can then follow the length of wire to its end, in order to pinpoint the specific location of the mass. This procedure usually requires a patient to schedule both radiological and surgical procedures on the same day the wire is inserted, to ensure against infection caused by the wire, as well as reduce the chance of the wire being dislodged. The wire could be jostled out of place, for example, as the patient moves around prior to the operation, or be inadvertently moved during the surgery itself; and in some cases, surgeons may have difficulty locating or identifying the end of the wire marking the lesion, or with radiographs. 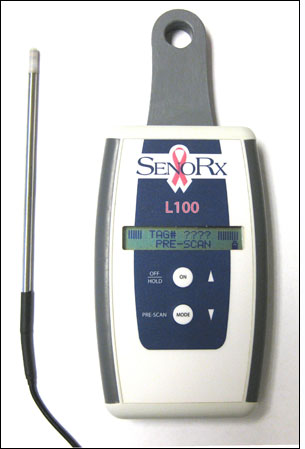 The SenoRx solution would eliminate the need for a wire, thereby allowing more time between the radiological procedure and the scheduling of surgery, since an RFID tag could remain within the breast for up to seven days without causing an infection risk, according to Paul Lubock, the company's senior VP and chief technology officer. Because part of the wire is located outside the breast, and is thus exposed to bacteria and pathogens in the environment, it can act as a conduit, carrying germs into the body, and thereby cause an infection if it remains for longer than a day.

The solution uses an RFID handheld reader and software from Health Beacons, as well as off-the-shelf RFID tags. SenoRx now seeks 510(k) clearance from the Food and Drug Administration (FDA), which is required for medical devices before they can be used on humans. During the 510(k) process, the FDA determines whether a device is equivalent to a previous instrument cleared by the FDA or marketed before 1976. The 510(k) submitter explains the similarity between the new device being submitted for clearance and any previously approved tools it may replace, outlining why any differences between them should be acceptable. Once it obtains 510(k) clearance, SenoRx intends to proceed into testing with live human subjects.


Health Beacons first approached SenoRx with the RFID interrogator and tag in August 2008. The system involves an implantable tag approximately the size and shape of a grain of rice, as well an injector to implant the tag, and a handheld reader provided by Health Beacons. The tag consists of an 134.2 kHz RFID inlay encased in glass and complying with the ISO 11784 and 11785 standards, and its glass exterior is surrounded by a steel coil, each end of which forms a hook. The purpose of the coil and hooks is to help prevent the tag from migrating within the body.

The SenoRX RFID tag is surround by a metal coil to prevent it from migrating once it is injected.

While examining a lesion, a radiologist would use an injector to insert a tag, in the center of the tumor or inject a tag on each side of it to form a bracket around it. The patient could then go home and proceed to schedule surgery within the following week. Prior to cutting an incision, the surgeon uses a pencil-like probe wired to the RFID reader (with an antenna in the probe), in order to detect the tag. Once the probe comes within 3 centimeters (1.2 inches) of the tag, the interrogator emits a sound to indicate it is within range. The distance between the tag and reader is determined by the strength of the tag's emitted signal, which becomes louder (accompanied by a light flashing on the interrogator) as it gets closer. The reader screen lists that tag's unique ID number as well. After the lesion is excised, all tags are removed as well and are disposed of.

RFID may make the identification of a tumor more accurate than the traditional wire method, Lubock says, though the technology has not yet been tested for the degree of accuracy against that standard technique. Thus far, the device has been tested for accurate reads on cadaver and other tissues prior to the FDA 510(k) application. The convenience of reducing infection risks, and thus allowing more time between the scheduling of the radiology procedure and surgery, may be what will interest the health-care industry most. "That's the most compelling aspect of the solution," he states.

According to Lubock, once the system receives approval from the FDA and has gone through clinical trials, it may be initially provided to a limited number of health-care facilities. "We walk before we run," he says, indicating that SenoRx intends to market the product only after it has been through rigorous testing and possibly modified, based on feedback from pilot participants.