The company is one of thousands of small to midsize specialty retailers employing the Swarm Portal solution to measure the quantity of customer visits, and pair that information with sales data to analyze shopper behavior.

Jun 02, 2014Santa Rosa Ski and Sports is one of several dozen small businesses trialing or deploying a low-cost solution that uses wireless sensors to track and manage foot traffic data at its front doors, as well as pairing that data with point-of-sale (POS) statistics in order to gain a better view into shopper behavior. The solution, provided by Swarm, consists of a hockey puck-sized battery-powered Bluetooth Low Energy (BLE) sensor tag, an app that runs on a smartphone or tablet, and a monthly service fee to a cloud-based software company for managing and analyzing the collected data.

The solution, known as Portal, is intended to provide data and analytics to small and midsize businesses that have, until now, been unable to afford the kind of automated data that larger retailers have been adopting, according to Ryan Denehy, Swarm's co-founder. 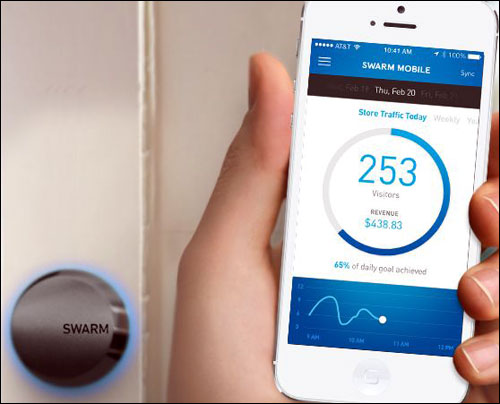 The Swarm Portal solution includes a battery-powered Bluetooth Low Energy (BLE) sensor tag (left) that counts how many people pass by, and an app that runs on a storeowner's smartphone or tablet.

Swarm was launched in San Francisco in 2012. The company's first product was a traffic-counting device that employed a battery-powered Wi-Fi sensor to detect how many people were entering or leaving through an egress (based on the Wi-Fi signals received from their cell phones), and then forwarded that information back to a cloud-based server via a Wi-Fi connection. The company has thousands of customers—mostly mom-and-pop stores that sell specialty products—using the Wi-Fi-based sensor.

However, Denehy says, the system required a reliable Internet connection in the store, and complications involving firewalls and IT support for network configurations made this a difficult barrier to entry for the small retailer. Therefore, the company has developed a new sensor and service and named the solution Portal. The new battery-powered Portal wireless sensor combines a motion detector with a transmitter that sends sensor-based data, via the BLE protocol, to BLE-enabled smartphones and tablets within its read range, assuming those devices are running the Portal app. The tablet or phone can then forward that data back to Swarm's Portal cloud-based server via a cellular connection, without requiring a Wi-Fi-based Internet connection. An upgraded version of the Portal sensor, known as Portal Presence, also comes with a Wi-Fi receiver to measure walk-by traffic (pedestrians who pass the store without entering), by capturing MAC address transmissions from cell phones and then forwarding that data to a smartphone or tablet via BLE.

Because it uses BLE technology, the Portal wireless sensor's read range is limited to 150 feet. The Portal tag is designed to cache up to three days' worth of traffic data, Denehy says, allowing a storeowner the opportunity to collect that data via a BLE-enabled smartphone or tablet at anytime within that window.

Santa Rosa Ski and Sports, located in Santa Rosa, Calif., began using the Swarm technology as a Wi-Fi solution about six months ago, but now has begun testing the BLE version, says Noah Lowry, the store's co-owner. Lowry and his partners purchased the business nearly two years ago, he adds, and have focused on streamlining processes, and on taking advantage of technology resources available for small businesses.

"As a ma-and-pa business, it's important to be able to focus on data that matters," Lowry explains. By knowing the day and time that each person enters and leaves his store, and the sales corresponding with that traffic, he can better strategize not only the use of his sales force, but also the placement of his merchandise. Santa Rosa Ski and Sports opted to install the BLE Portal at the doorway in such a manner that the system could detect the number of people entering the store. At the same time that the company installed the BLE Portal in May, it also deployed the earlier Wi-Fi version, facing onto the sidewalk, in order to track the number of pedestrians who walked past but did not enter. By collecting data about two types of traffic, the system could help the ski shop better identify the percentage of traffic entering the store, as well as when this takes place. In that way, Lowry says, "the software can track the number of walk-bys and the number of actual shoppers."

The traffic data is sent to the Portal cloud-based server, which the retailer can access at any time to determine not only how many people were in the store at a specific time, but also the history of that traffic over the course of days and weeks. In addition, the system pulls data from the POS software on the store's server, and then provides analytics based on the quantity of shoppers, as well as the percentage of those individuals' visits that led to a sale. "This gives us a more magnified look at what we're doing," Lowry states.

Because the two Portal devices have not been in place very long, Lowry says he is still evaluating the technology's benefits. "We're starting to see value," he reports, based on the data that the company has amassed to date, illustrating when the heaviest traffic enters the store, for example. Lowry says the firm intends to explore the feasibility of utilizing the technology to reach out to shoppers as well.

In the future, Swarm intends to release a version of the Portal tag that acts as a Bluetooth beacon by transmitting a unique ID number that can be captured by a shopper's mobile phone (assuming an app has been downloaded to enable this transaction). This allows the phone, in turn, to transmit its location data to the appropriate server, based on a particular beacon's ID, in order to receive coupons, product information or other relevant data.

Since most shoppers carry a smartphone with BLE capabilities, Santa Rosa Ski and Sports is considering providing such an app to customers that would enable the Portal system to identify a specific patron entering the store, and to then forward promotional offers and other information tailored to him or her. "That becomes a win-win," Lowry says, for both retailer and shopper. "We create a more personal experience for a customer and provide a better experience overall," while the business, as a result, will boost its sales.

According to Denehy, the Swarm system is designed to fill a void in technology solutions for small businesses. "What we found was that the ability to measure details such as foot traffic and customer behavior wasn't there," he says. The existing technology solutions, he explains, were priced at a level unaffordable to small stores. With the Portal solution, all that a user requires is the BLE sensor and a smartphone or tablet, "which acts as a backhaul to the server," he states.

Swarm offers integration with the most commonly used cloud-based POS systems, such as those from Vend, LightSpeed, Shopify and Revel Systems. "If they use older point-of-sale systems," Denehy says, "there's instructions to download an additional file" from Swarm that would enable the retrieval of POS data by the Swarm system.

To date, several dozen Swarm Portal customers are in the process of changing their Wi-Fi Portal wireless sensors to the BLE-based versions, and are downloading the Portal app on their BLE-based devices. In addition, Swarm has sold more than 2,000 Portal BLE-based wireless sensors. "We have customers now in all 50 states," Denehy says. The company also has distributors in the United Kingdom, the Middle East and Southeast Asia, as well as offices in New York and Sydney, Australia. What's more, the firm offers a product known as Ping that includes the Portal device and a software development kit (SDK), enabling users to create their own apps to manage traffic-based data and trigger notifications.

A single Swarm Portal wireless sensor costs $79, while the monthly fee to access the Swarm-hosted server is $39. Customers using Ping would not need to utilize the cloud-based system, and thus would not have to pay the access fee.