The ground-transport dispatch office uses RFID to track cabs parked in the waiting lot, and BlipTrack sensors to track passengers at its taxi queuing area, resulting in shorter lines and faster service.

Aug 19, 2016If a city's entire fleet of taxicabs could pick up passengers at its airport, long waits might be unheard of—and so might taxi drivers' earnings. "Because they work on turnover, the more trips they take, the more money they make," explains David Boenitz, San Diego International Airport's director of ground transportation. If all of San Diego's 1,500 licensed taxi drivers could pick up passengers at the airport, however, the supply would be diluted, and "you'd have taxi drivers that make nothing." That's not to mention the traffic quagmire the airport would face with an unchecked number of cabs awaiting fares.

Therefore, the airport issues only 362 permits to San Diego cabbies. It also gives each of these permitted drivers a TransCore eGo passive ultrahigh-frequency (UHF) RFID tag. The airport's ground-transport dispatch office uses a TransCore RFID reader to collect the unique identification numbers of all eGo tags mounted inside the cabs parked in a holding pen. Then, based on the length of their stay in the lot, it directs them to one of the airport's two taxi queues (there are two terminals, with a queue at each one). This gave the airport tight control over supply, but demand remained a mystery. "We might know that we have 100 cabs, but we wouldn't know if we had 200 people waiting for them." 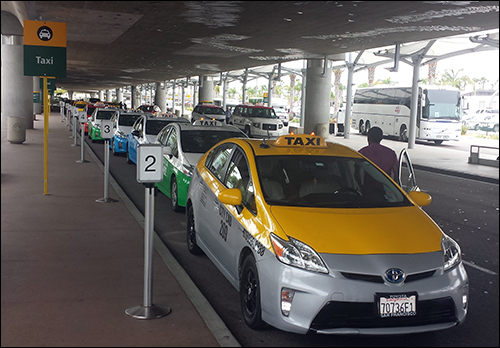 The airport could send employees out to perform periodic counts (which it did occasionally), but that only provided snapshots of wait times, so it sought a technological solution. One option, Boenitz says, was to position infrared cameras along the queuing area and then use software to divine the number of people in line, as well as their wait times. But during hot weather, he adds, the heat radiating from the sidewalk could make the counts inaccurate. Thus, the airport opted not to test that technology.

Instead, a little more than a year ago, in one of its two terminals, the airport began evaluating technology provided by Blip Systems, which uses gateways, known as BlipTrack sensors, that collect MAC addresses being broadcast by Bluetooth or Wi-Fi radios in nearby cellular devices. The sensors then encrypt and time-stamp the numbers and send them to the server, hosted by Blip Systems.

At the San Diego airport, one BlipTrack sensor is installed above the sidewalk where passengers are directed to wait for a cab. A second sensor is installed where passengers enter the vehicles. So when someone carrying a mobile device that is broadcasting a MAC address gets into line, the first read of that MAC is time-stamped. The system then uses the time-stamp of the last read of that same MAC address, from the sensor near the end of the line, to determine that person's total wait time.

The main benefit of using Blip Systems' solution has been the ability to dispatch cabs from the waiting area to the queue according to real demand, rather than educated guesses, based on the time of day, holidays or spikes caused by passengers arriving for major conventions. Plus, it provides empirical evidence regarding whether the cab companies (represented through a consortium) are in compliance with their contract with the airport, which requires that they provide the airport with enough cabs to ensure that wait times do not exceed 10 minutes.

The airport has decided to keep the sensors installed. The facility is now in the process of installing another set of sensors in its other terminal, so that it will be able to monitor wait times in both taxi queues.

The next step is to integrate the Blip Systems data with the dispatch system that the airport uses to call cabs up from the waiting lot to the queue; currently, dispatchers still need to continually refer to the wait times shown on the Blip platform, and then call up cabs accordingly. Once that integration is complete, Boenitz says, "if there are 15 [MAC addresses detected] in line, they'll call 15 cabs."

After the technology is fully integrated, the airport hopes to use digital displays or announcements inside the terminal to inform travelers of the current taxi wait times. This will help travelers to decide whether they are more likely to get a speedier departure from a taxi or from a ride-sharing service that they might also use, such as Uber or Lyft. (Ride-share apps provide users with wait times based on the location of the nearest driver.)

Boenitz says the airport has contracts with four ride-sharing services (Uber, Lyft, Wingz and a fourth local provider), and that demand is quite robust. The airport receives a small fee from the ride-sharing providers based on every pickup that drivers make on the premises.

In recent years, a growing number of travelers have begun to rely on ride-sharing services to get to and from airports, and ride-sharing is often a less expensive option than cabs. However, Boenitz says, during times of heavy demand, the wait times for taxis are shorter than those for ride-sharing services at the airport. Travelers eager to get to their destinations may gladly opt for a cab if it gets them on the road sooner.