Thanks to RFID, these mechanical helpers have a better sense of their roles, allowing them to be more productive.

Oct 01, 2008From Lost in Space's Robot B-9 to Star Wars' R2-D2 and the mechanical races that populate the film Transformers, robots have long captured the human imagination and inspired creativity. And not just for entertainment. In the real world, robots have been developed to liberate people from tedious, repetitive or dangerous tasks in factories, and even to clean home floors. Now researchers are combining the automation features of robotics with the identification capabilities of RFID—a tandem that promises to improve productivity and safety in a number of sectors, including health care, manufacturing and public safety.

Already, Homers from Aethon are working in hospitals, locating and delivering supplies, such as IV pumps and wheelchairs, identified with active ultrahigh-frequency tags from Identec Solutions. Homer, which was introduced last year by the Pittsburgh-based robot manufacturer, is equipped with an Identec RFID reader and uses a map saved to its memory to find its way to different departments or areas in a hospital. The RFID applications "are going beyond just identifying an asset," says Joe Costa, VP of marketing for Aethon. "It allows you to have the right piece of equipment at the right place at the right time. 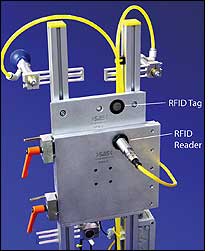 The ability to locate and deliver supplies is the key to improving inventory management at hospitals, where cost-reduction pressures are intense, says Barry Skirble, Aethon's CIO. "Hospitals are trying to lower the amount of inventory that they have to purchase," he says. By knowing the precise location of pumps, wheelchairs and other supplies, hospitals can avoid buying materials they don't need. In addition, he says, robots can free up hospital staff for patient care and other tasks.

Since Homer's inception, Aethon has released a couple of upgrades, improving the interface and updating the software that runs the system, with another software update expected before year's end. The company is also "actively looking" at using passive RFID because of the cost differential of the tags, Skirble says. And in response to demand from the hospitals, Identec has developed tags as much as 50 percent thinner than the ones originally deployed. The new tags, which are about 1.5 inches thick, can more easily be attached to smaller items, such as heart monitors.

Hospitals aren't the only business that Aethon has set its sights on. The company envisions its RFID-enabled robots streamlining operations in warehouses and distribution centers, where pallets of goods are often stacked in multiple layers or in bins, and locating and moving specific items is difficult. Aethon is in the early stages of testing the technology in such an environment, but Skirble says a pilot project is at least six months away.


Robots with end-of-arm tooling (EOAT) have been put to work in manufacturing facilities, where they automate the assembly, production and packaging of products. The EOAT is mounted to the robot's arm and acts as a hand, manipulating the necessary tools to complete tasks such as grasping, moving or aligning parts. Various tools, such as grippers, vacuum cups, sensors or pneumatic valves, can be attached to the EOAT. But sometimes the wrong EOAT is mounted on the robot or the wrong tools are loaded on, resulting in costly errors. To remedy the problem, SAS Automation, a privately held company in Xenia, Ohio, recently introduced a robotic tooling product with RFID capabilities.

RFID readers and passive tags are mounted on the EOAT, and tags are attached to the tools. The data from the tags is used to confirm that the correct EOAT is mounted and that the right tools are in place. If the tags' identities don't match the specifications in the software that controls the production run, the line shuts down. Texas Instruments and Turck, an industrial automation company based in Mülheim an der Ruhr, Germany, are supplying the tags and readers.

The need to identify the tools attached to the robotic arms has arisen as auto­mated manufacturing processes have become increasingly complex, says Trent Fisher, owner of SAS. Manufacturers are changing their production runs more frequently than ever before, which means tools need to be swapped out more often. The addition of RFID reduces the risk of the wrong tool, die or mold being used, he says.

Beyond manufacturing, robots are now being employed for surveillance and military operations, as well as to track public safety workers in disaster areas. But their effectiveness has been limited by the inability to determine their location, says Sanjiv Singh, a research professor at Carnegie Mellon University's Robotics Institute. He has been researching how a series of RFID tag reads could be used to pinpoint the location of robots as they move around in various high-risk environments, such as a burning building or a radioactive-waste site. Singh says RFID has a major advantage over other identification technologies such as bar codes, because it works through walls or in smoky or dark conditions.

Scientists at the University of Freiburg in Germany are also researching how RFID can help robots speed up rescue and recovery efforts. Last year, they tested a system using RFID tags as coordination points to create maps of disaster areas or hazardous sites. Humans and robots applied tags to the test site, and the data from the tags was used to generate maps that could help rescue workers know where to look for victims, how to navigate the site, and what equipment might be needed when entering a particular area.


In addition to serving as coordination points for the mapping, the RFID tags could also be used to store key information about the status of particular buildings within the disaster area. Data from the tags could be transmitted over a wireless LAN to a central command station, from which the rescue mission could be coordinated. The team's work is ongoing, says Alexander Kleiner, a researcher at the university who's working on the project.

Frontline Robotics, in Ottawa, Ontario, is working to RFID-enable its mobile robots, which are used for surveillance and security applications. In response to customer requests, the company is adding RFID so the robots can be used for inventory control, says Frontline president Jeremy James. Frontline is integrating RFID readers into its robotic unmanned group vehicles to conduct audits of tagged goods stored at outdoor military supply depots and in warehouses. James expects the RFID-enabled robots to be available sometime next year.

Research continues at universities around the world to further advance the use of robotics and RFID. This past summer, researchers at the Technical University of Munich unveiled an Assistive Kitchen project, which features a robot called B21 that can do household chores. B21 has an RFID reader attached to one of its arms that can read RFID tags on dishes, cups and other kitchen items. It can also learn simple commands—such as "set the table" or "put dishes away"—and use RFID readers built into the cabinets and kitchen table to help carry out those tasks.

The B21 may get out of the lab in the near future, but don't expect to see the widely reported RFID-enabled robotic pouf chair anytime soon. The concept for a chair that would follow library browsers to provide a ready seat is just that—a concept developed by Jelte van Geest as a final project at the Design Academy Eindhoven in the Netherlands. His idea is for the chair to have a built-in RFID reader that would be activated by a library card with an embedded RFID transponder.

While robots—and now robots enhanced with RFID—will continue to capture our imagination, they're likely to remain niche products for some time, says Louis Bianchin, a senior analyst with Venture Development, a technology market research firm in Natick, Mass. "At the stage of development where the technology is today, it will be difficult to justify significant spending on RFID-enabled robotic equipment," he says. "But for niche applications with limited functionality, it's certainly worthwhile." Health care is one industry that Bianchin predicts is ripe for adoption, as well as the possibility of using robots with RFID capabilities to assist disabled people in their homes.