Jan 16, 2005Deploying a radio frequency identification system involves a lot more than purchasing the right tags and installing the right readers (see Basics of RFID Technology). To get business value from the all of the information collected, companies will need middleware to filter the data. They may need to upgrade enterprise applications and integrate it with RFID middleware. Each component will have up-front costs and some unexpected costs.

It's not possible to provide a list of every element that every company will need and the cost of those systems, but we'll explain each of the major components, provide some guidelines on costs and point out where there might be some hidden costs. Keep in mind that every company's needs—and every application—are different, so costs will vary widely from implementation to implementation.


Tags and readers are the main components of an RFID system. Passive tags are cheaper than active tags. But pinning down tag costs is not easy.

The cost of a passive tag depends on its frequency (a high-frequency tag has more copper in the antenna and generally costs more than an ultra-high frequency tag), the amount of memory, design of the antenna and packaging around the transponder. Passive tags generally range from 20 cents for the simplest license plate tag purchased in high volume to several dollars for a transponder embedded in a key fob or plastic housing, to protect the tag from heat, cold or chemicals. An RFID transponder in a thermal transfer label that can be used for printing bar codes is typically 40 cents or more.

In addition to the tag price, companies need to consider the cost of testing passive tags. Failure rates among tags ranged from zero to 20 percent in 2004 for UHF EPC tags. And while that figure will improve as manufacturers get more sophisticated, companies still need to test tags to ensure they are functioning. And they may need to purchase extra tags to compensate for the defective tags that need to be discarded.

Active tags range from $10 to $50 or more. The cost depends on the size of the battery included, the amount of memory on the microchip and the packaging around the transponder. Active tags are not mass-produced in high volume and don't have problems with antennas detaching from the microchip because they are usually housed in protective plastic.

UHF readers range in price from $500 to $3,000, depending on their functionality. Dumb readers are readers with limited computing power. They tend to be cheaper than intelligent readers, which typically have on-board computing power and can filter data, store information and execute commands. Agile readers can communicate with tags using a variety of protocols, and multi-frequency readers can read tags using different frequencies. Agile and multi-frequency readers may also have on-board computing power for filtering data and running applications.

Readers can internal or external antennas. Readers with external antennas can have one or more ports for connecting reader antennas (the newest readers have up to eight antenna ports). Readers can also have input/output ports for connecting to external devices. An input port might be connected to an electric eye that runs on the reader when something breaks its beam. An output port might connect to a program logic controller, conveyor sorter or other device controlled by the reader. Readers also have ports for connecting to a computer or network. Older readers use serial ports. Most newer readers have Ethernet, Wi-Fi or USB ports.

The reader's price depends on its features and functionality. The list price of readers may not include the price of antennas and cabling. Companies should also consider the price of installing readers and the price of running electric cables to areas where readers will be installed. And the current generation of EPC readers are not all the same. End users say some readers and reader antennas work better than others of the same make and model. So there may be additional costs for testing. (Independent test labs, such as the RFID Alliance Lab, offer objective information on RFID products, which can reduce need for each company to test products.)


Middleware is a generic term used to describe software that resides between the RFID reader and enterprise applications. It's a critical component of any RFID system, because the middleware takes the raw data from the reader—a reader might read the same tag 100 times per second—filters it and passes on the useful event data to back-end systems. Middleware plays a key role in getting the right information to the right application at the right time.

Companies will need to buy tags and have them tested

There are many RFID middleware products on the market. All do some basic filtering, but many also perform additional functions. Some middleware manages RFID readers: It monitors their health, configures them, sends software updates and so on. Other middleware may manage the data recorded in databases for enterprise applications to use.

And some middleware has its own applications, often for a specific industry. One application might be confirmation of shipment and receipt. When a product is sent to a retailer, the middleware confirms the shipment and sends an electronic message to the retailer with the EPCs in the shipment. When the retailer receives the goods, receipt is confirmed and a message is sent to the supplier. The retailer doesn't need to be running the same middleware because most RFID middleware is based on standardized Internet languages, such as XML, and protocols, such as Simple Object Access Protocol. (For an in-depth look at RFID middleware and the leading providers, subscribers should read RFID to ERP: The Land Between).

The cost of middleware varies from vendor to vendor and is usually based on the number of locations where it will be installed, the complexity of the application and many other factors. Forrester Research put the cost of middleware at $183,000 for a $12 billion manufacturer looking to meet the RFID tagging requirements of a major retailer.

Companies will also need to purchase servers to run middleware within a warehouse, distribution center or production facility. These servers are sometimes called edge servers, because they are close to the edge of the network where the digital world meets the real world. Edge servers are standard computer servers. They typically do not have any special hardware, and they connect to readers using serial or Universal Serial Bus (USB) ports.


The goal of any RFID system is to generate data that can be acted on to boost efficiency, cut costs or provide other business benefits. That means that companies will need to invest in enterprise applications that can make use of RFID data. Warehouse management software providers, such as Manhattan Associates and RedPrairie, have upgraded their applications to manage the unique serial numbers in RFID tags. Enterprise resource planning software providers, such as SAP and Oracle, are also working to upgrade their applications. It's likely that software will evolve as RFID adoption spreads and companies learn how to use RFID data to improve their operations. The cost of these applications vary depending on the number of "seats"—how many users will access the application—the number of locations ??? and other factors.


The vision of the Auto-ID Center, which created the Electronic Product Code, was to have a global network infrastructure—a layer integrated with the Internet—that would enable companies to look up basic information about items as they moved through the global supply chain. Additional data would be stored in secure databases, so supply chain partners could share information about the location of products. 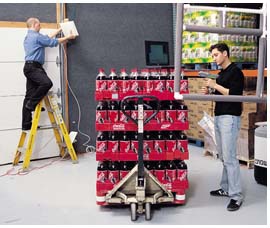 Integrators or staff are needed to install equipment

As of January 2005, the network infrastructure is still being built out. It will likely evolve over the next several years, with simple data sharing and applications coming online later this year or early in 2006. Companies that want to take advantage of this open network will have to purchase servers to host local Object Name Service directories. ONS is similar to the Domain Name Service that points computers to Web sites. ONS will point computers to Internet databases where data associated with an EPC are stored. The ONS has a distributed architecture, like the DNS. But companies will want to host a local ONS to avoid having to go out to the Internet to look up information about products every time they read a tag.

It's also envisioned that the EPC Information Service will store data associated with EPCs. Companies may need to host EPC Information Services locally, or they might want to outsource this task to companies such as VeriSign, which provide security and authentication services today and are likely to provide EPCIS products in the future. (See our FAQs for more on the EPCglobal Network.)


Most companies will need to hire a systems integrator to install the readers, determine the right placement of tags for products and make sure that they are feeding data to the middleware in the right format. RFID systems can be tricky to install in a way that provides accurate reads because many factors affect the ability to read a tag, including the placement of the tag, placement of antennas and type of antennas.

Companies will also need to invest in training for their employees, particularly engineering staff who will manage readers in manufacturing and warehouse facilities, and IT staff who will work on the systems that manage RFID data.

The costs can be significant, particularly at this stage when the industry is very immature. In a report published in March 2004, Forester Research estimated that it would cost a $12 billion consumer products goods manufacturer $128,000 for consulting and integration, $315,000 for the time of the internal project team and $80,000 for tag and reader testing.