Gate Gourmet Peru has launched a hybrid UHF and NFC system from Radical Solutions which ensures that all food-preparation knives, each with an affixed RFID tag, are detected in a locked cabinet, and that any removal and return of those knives is automatically identified and tracked by time, date and personnel ID, as well as by video.

Apr 27, 2018Gate Gourmet Peru is deploying an RFID system at the Jorge Chávez International Airport, in Lima, intended to prevent knives from falling into the hands of potential terrorists. The ultrahigh-frequency (UHF) and Near Field Communication (NFC)-based cabinet solution, designed to manage the kitchen tools used during food preparation, tracks each knife used to prepare inflight meals.

The system consists of tags attached to the knives, seven RFID-enabled smart cabinets in which the knives are stored, and software that identifies each time a knife is removed and later returned, as well as by whom. The technology is provided by Radical Solutions. An NFC reader in the cabinet also confirms the identity of any individual who removes a knife. 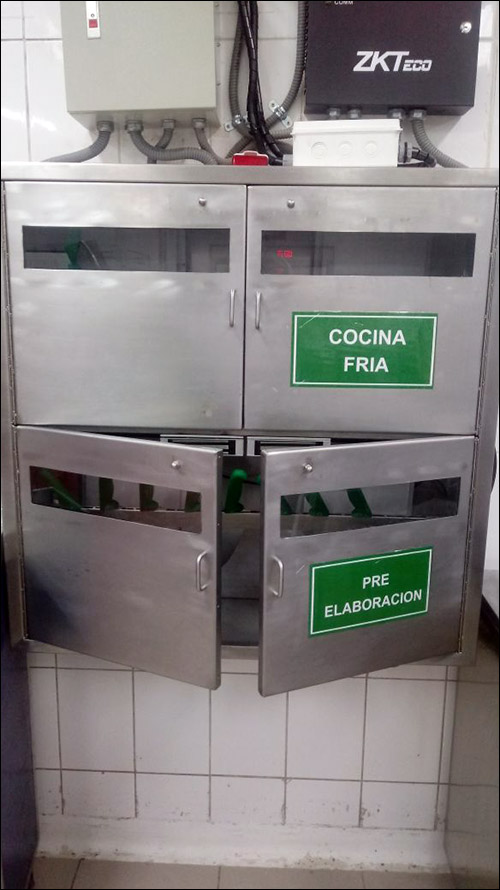 Gate Gourmet, the world's largest provider of catering and supply services for airlines, supplies flights with meals out of airports across the world, including at the Jorge Chávez facility. Radical Solutions, meanwhile, specializes in unique deployments, according to Jorge Camus Loredo, the company's CEO. Its customers typically require individualized, innovative RFID solutions. To meet their needs, says Hilda Samamé Jimenez, Radical Solutions' computer science engineer, the company employs an analysis team that works closely with customers to develop a solution.

In the case of Gate Gourmet, the problem was how to keep knives secured in the airport, where anything that could be a potential weapon must be closely monitored. The company wanted not only to track its knives, but also to understand who was responsible for them, and to ensure that no one ever took more than one knife from a locked cabinet at any given time.

Each chef is assigned a single knife that must be returned after use. "As there is no reliable record of this delivery and reception," Samamé Jimenez says, "the whereabouts or responsibility of the knife is not known." A knife, he explains, could find its way to an aircraft and be used as a weapon to commit acts of terrorism.

Gate Gourmet occupies kitchen facilities inside the airport, in which knives and other instruments are used. Two such locations are the cold-cooking and pre-processing areas. In the cold-cooking area, staff members use knives to chop the ingredients of salads and light snacks. Additionally, in the pre-processing area, raw vegetables, meat and other products are cut for the cooking of in-flight meals.

Without the RFID cabinets, Samamé Jimenez says, Gate Gourmet had no automatic or reliable method of controlling the traceability of the knives. The company had no way of knowing who had possession of a knife at any given time, which meant that the cutlery could be misused.

The intelligent cabinet solution that was developed leverages a combination of UHF and NFC technologies, along with security camcorders and software that links the RFID read events via video. Radical Solutions built a prototype and tested it in the company's laboratory. 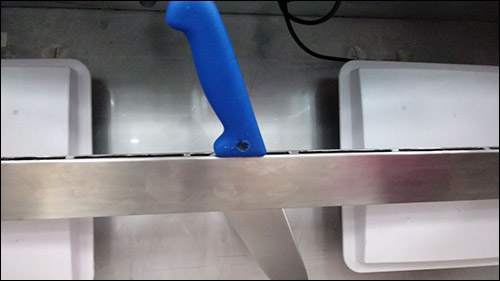 The cabinet consists of a built-in Hopeland Long Range UHF RFID reader with a Mojix Turbon antenna to interrogate an OPP IOT RFID tag attached to each knife. A Mifare 13.65 MHz reader from NXP Semiconductors interrogates Promag high-frequency (HF) RFID tags built into staff ID badges and is used to control who can access the cabinet. Radical Solutions software managing the data resides on a local server. "The monitoring platform was developed by our team," Samamé Jimenez says, in order to store, interpret and analyze information sent by the NFC and RFID readers and the video camera.

Following prototyping, Gate Gourmet installed two cabinets in the airport's food-processing zone in January of this year, and the system was taken live in February. For the proof-of-concept, nine 10-inch knives were tracked in the pre-processing area, while five 10-inch knives and four bread knives were tracked as they were accessed and then returned from the cold-cooking section.

The team cut a slit into the handle of each knife to implant an RFID tag. The tags are encapsulated to protect them against water, dust or food. The installation team decided to embed the tags in the lower part of each handle, near the knife blade, so that they won't interfere with the ergonomics of knife use.

In addition, every staff member was provided with an NFC card to open and close the smart cabinet. Each time a Gate Gourmet employee collets a knife, he or she must use the NFC badge to prove his or her identity. The work must first tap the badge against the reader at the front of the door. The unique ID number encoded on the badge is captured by the reader and sent to the software, where the ID number is validated. If the user is authorized, the door locks release and that individual can then access the cabinet.

Personnel are permitted to remove only one knife at a time. Once a worker reaches in and removes a knife, the UHF antenna will no longer read that knife's tag ID, and the software is updated to indicate that the utensil has been removed. The action is then paired with the staff member's ID.

If the individual removes more than one knife, however, the software will trigger an audible alarm. At the same time, the video camera records footage from the time that the cabinet doors are unlocked until they are closed and locked again. The same process is repeated when the employee returns the knife.

The system can not only issue alerts to management if an exception occurs (such as a knife not being removed within the expected span of time), but also create an historical record of how much a knife is used, for how long and by which employee. The data can also be used for analytics purposes, to help the company better manage its inventory of knives, understand their performance life and frequency of use, and thus make replacements only when necessary.

Gate Gourmet Peru is the first site to implement this solution, while other Gate Gourmet locations, as well as other companies, intend to install the system as well. "Gate Gourmet's innovation policy," Samamé Jimenez explains, "is to replicate the success stories that it deploys in any of its operations to other facilities in other countries where Gate Gourmet operates."