Jan 03, 2012Since May 2011, players at TopGolf, an RFID-enabled golf entertainment complex located in Allen, Texas, have been viewing their golfing scores on LCD screens, based on RFID readings of the balls they hit. The solution, using passive EPC Gen 2 ultrahigh-frequency (UHF) RFID technology to measure the distance that each ball travels, as well as keep score for every player, is the latest in a series of RFID rollouts at TopGolf's locations worldwide. Its newest site, the company reports, is the largest and most technologically advanced, with a 65,000-square-foot gaming area, as well as food, drink and party rooms.

The RFID system—provided by Rush Tracking Systems, which installed and integrated the solution—employs RFID tags embedded in golf balls. It also includes 50 Impinj Speedway Revolution R420 readers, used in conjunction with eight-port multiplexers provided by SkyeTek. Altogether, the facility has 548 read points installed throughout the complex, at ball dispensers located in hitting bays, as well as along the 240-yard-long fairway. 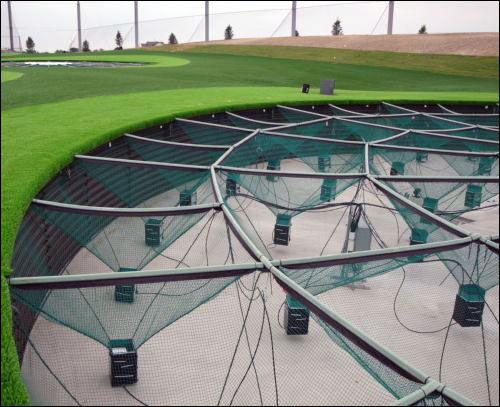 When a ball lands on the netting surrounding a target, it rolls past an RFID reader antenna, thereby identifying where the ball has landed and awarding points accordingly.

TopGolf's entertainment complex includes a variety of golf-related games, as well as food, beverages and events or private parties. Many of its guests are new to golf, and value the overall entertainment experience. Thus, the company has made a point of providing something beyond a simple driving range or golf course, where players hit balls and must then walk the course in order to measure their success. Instead, with the RFID solution in place, the participants can hit balls toward targets surrounded by nets, under which receptacles are installed to capture the balls where they land. Upon hitting the net, a ball rolls toward the nearest receptacle, passing through it like a marble dropped into a funnel. An reader antenna captures the unique ID number on the tag embedded in the ball and forwards that data to the company's back-end software, to determine which zone the specific ball entered, and thereby ascertain that individual's score. A user can view his score on an LCD screen in real time, along with those of other members in his party, until a winner emerges.

TopGolf's Allen location is the company's seventh facility. The firm built its first RFID-enabled golf game center in 2000, in Watford, England, and has since installed RFID-based systems at five additional sites, including one in Dallas. All of the solutions installed prior to that implemented in Allen incorporate low-frequency (LF) 125 kHz proprietary RFID hardware and software designed and developed by TopGolf itself, and manufactured by a third party.


UHF technology is being used at the Allen facility, as well as at two other Texas sites scheduled to open this year in Houston and Austin. The shift to UHF, says Chris Wagner, an engineer in TopGolf's research, development and technology group, met the company's desire to upgrade the automated scoring system with off-the-shelf components. In contrast with LF technology, he explains, the UHF system provides a wider read range, so that instead of needing to be read within a 2-inch area defined by a receptacle, each UHF RFID antenna creates a "cloud," or read area, closer to 12 inches in diameter—its range the result of size constraints of the RFID tag within the ball—and can be placed directly in the ground at the fairway, rather than within a small receptacle. Whether LF or UHF RFID technology is involved, the experience is largely the same for players, Wagner says—in both cases, they can view their scores on an LCD screen, based on the zone reached. The company intends to replace its existing LF solutions when the time is right, he adds, noting that altogether, TopGolf's six older facilities are currently using 400,000 balls containing LF tags.

At TopGolf's site in Allen, each ball contains an inlay from UPM RFID, made with an Impinj Monza 3 tag, and converted by Vanguard ID Systems. By using a standards-based UHF system instead of its own proprietary technology, Wagner says, TopGolf will no longer need to rely on a single company for RFID hardware and replacement parts. What's more, the UHF solution requires fewer readers, since many read points can be connected to a lone UHF interrogator, while the LF system requires a reader for each read point. 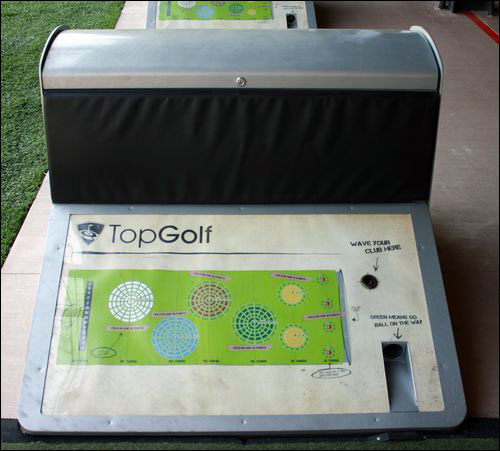 Each of the 94 hitting bays is equipped with an RFID-enabled ball dispenser.

Every one of TopGolf's fairways contains a series of close-, mid- and long-range target greens. Each player receives 20 golf balls for a game, and earns points by hitting the balls to zones within the target green, with higher points awarded for balls landing closer to the pin. The player with the most points at the end of 20 balls wins. TopGolf offers several other games featuring different scoring rules, all utilizing radio frequency identification.

Upon first arriving at the Allen site, a player receives a card with his name printed on it, and encoded in the card's magnetic stripe. The player and his party report to one of 94 hitting bays, each equipped with an RFID-enabled ball dispenser. The visitor first swipes his card's magnetic stripe across the card reader, which sends that individual's ID number to TopGolf's Game Play software, residing on the company's database. He can then wave his golf club in front of the dispenser, which is equipped with an optical motion sensor. Once the motion sensor detects that movement, the dispenser releases a ball. Each ball is equipped with an Impinj Monza 3 RFID tag chip with a unique EPC number encoded on it. That ID is captured by the reader, and Thinkify software links that number to the target zone ID and forwards it to the back-end system, where software provided by Infonaligy links the player with that specific ball and hitting bay. Other players then go through the same process.


Once hit, the ball lands on the fairway, where 25 Speedway Revolution R420 readers are installed in the ground, each inside a protective enclosure that complies with NEMA 4specifications. Each reader controls as many as 24 antennas, via the eight-port multiplexers used to connect to the reader ports. As many as four interrogators are installed per target on the fairway, resulting in up to 87 read points, In addition, 24 readers were installed at the hitting bays, with each reader supporting the antennas of up to four ball dispensers, The interrogators then transmit data to the back-end software, via Ethernet and a fiber-optic cable. Altogether, there are 458 read points throughout the various zones established on the fairway, in addition to 94 read points at the ball dispensers. The Infonaligy software links the player's ID number with each ball's ID, as well as the zone in which that ball was read, and calculates a score, which is then displayed on an LCD screen by TopGolf's Game Play software.

When the complex is operating at full capacity, Wagner says, the RFID system must manage more than 10,000 ball reads per hour. 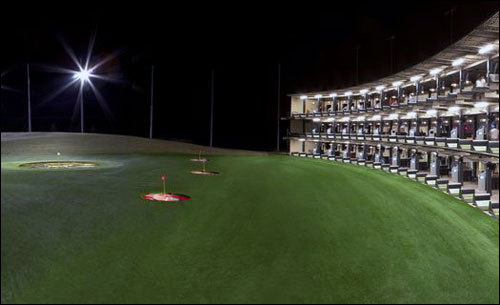 Altogether, there are 458 read points throughout the various zones established on the fairway, as well as 94 read points at the hitting bays.

Rush Tracking Systems, together with golf-ball manufacturer Callaway Golf, tested the ball tags in order to determine whether they could withstand the rigors of the TopGolf game and a minimum of 600 hits.

TopGolf developed a "diverter" machine to test balls in-house, and to ensure that the tag within each ball is functioning properly at any given time. The diverter machine utilizes the reader's general-purpose inputs and outputs as it feeds balls past another RFID antenna, and the reader attempts to interrogate the tag's ID. If the system is unable to read a tag, a reader-resident custom application triggers a solenoid that diverts the ball into a reject bin.