The system's developer says the RFID software designed for blind users is not only effective, it's an improvement on its original RFID software.

Sep 17, 2010Blind Industries and Services of Maryland is employing radio frequency identification at its facility in Salisbury, Md., to help its vision-disabled workers accurately pack boxes with the correct types and quantities of items. The system was provided by SimplyRFID, an RFID solutions provider and software developer based in Warrenton, Va.

In 2005, the U.S. Department of Defense (DOD) had issued an RFID tagging mandate in order to improve its processes for tracking and tracing cases and pallets of goods. Since then, various branches of the U.S. military have utilized the technology to track goods at the item level. For example, RFID is being used to track inventory of training uniforms and related items as they are issued to recruits at the Lackland Air Force Base's recruit training center (see USAF Boot Camp Tracks Boots). 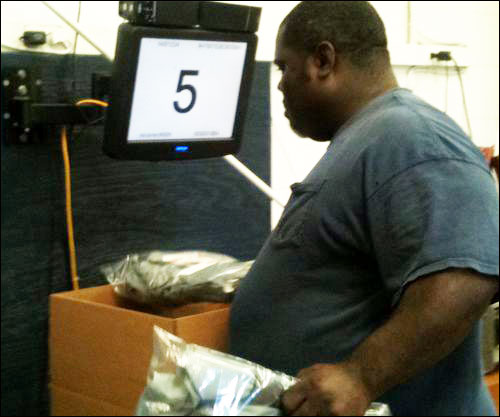 A ThingMagic Astra reader mounted under a workbench reads the RFID tag of each garment placed in a cardboard box. The system provides a running tally via audio and video.

Some of the many manufacturers of these uniforms, including Blind Industries and Services of Maryland, are associations of the National Industries for the Blind (NIB), an organization that links blind workers with jobs. So when it came time for these firms to respond to a request by the U.S. Defense Logistics Agency (DLA) that EPC Gen 2 RFID tags be attached to items being shipped to Lackland, they needed an RFID system that their blind and visually impaired workers could operate.

SimplyRFID won the bid to provide an all-inclusive RFID system to firms associated with NIB that would enable workers to interact with the tags, readers and software necessary to comply with the DLA's request. In order to provide an RFID system that vision-disabled staff members could use, SimplyRFID had to make major changes to its Nox platform—a software program would run on a server at each facility in which the RFID solution was to be deployed. Each reader would be controlled by a separate PC that receives its directives from the Nox server. The solution would also include RFID printer-encoders and tags.

For vision-disabled personnel, SimplyRFID overhauled the interface that runs on each PC, because this existing interface to its Nox software provided many drop-down menus and options that those workers would be unable to see. "In the old system, a lot of data was displayed on the PC monitor at each reader station," says Carl Brown, SimplyRFID's president. "There was the total tags in view, the total items packed. You might also see a number of error messages on the screen. There is a lot of information that is hard to process. Sighted workers have 10 to 12 options on what they can do at any moment when interacting with the software. The blind version has only yes/no options, which are provided through over 110 audio commands."


So with the Nox system that SimplyRFID designed for the vision-disabled workers, users interact with the system based on audio alerts and commands, as well as a simple touch-screen interface. Gone are the myriad options and drop-down menus offered by the older software. But what SimplyRFID didn't anticipate is that by removing the software's complexity, it also made interfacing the software much simpler for all users—even those not optically challenged.

"We're now actively looking at deploying this version of our software for all our clients," Brown says, referring to general manufacturers—including those making goods for the DOD—as well as companies that utilize SimplyRFID's solutions for tracking assets. "Starting with our next customer deployment, we will demonstrate both systems and let the customer decide. Developing it really forced us to make the interface more efficient and simple. And I can't see us deploying the [older] version again [for any client]."

Early this year, SimplyRFID began testing the customized software at Blind Industries and Services of Maryland's Salisbury facility, and in late July, the site rolled out the solution. When using the system, employees listen for audio confirmation of the tagged items they're handling, and then interact with the software by pressing a large touch-screen above their workstations.

Each item is packaged in a separate plastic bag and tagged with an Avery Dennison AD-223 RFID inlay encoded with a unique ID number associated on the Nox server with its stock-keeping unit (SKU) and size. The inlay is embedded in a hangtag that is printed and encoded at the facility using a Zebra Technologies R110Xi4 RFID printer-encoder installed at the Salisbury site. This replaced the older hangtag printer that generated hangtags without RFID inlays, so the business process for workers at the facility has not changed. At the apparel packaging line, employees still attach a single hangtag to each piece of apparel, just as they did previously. The only difference now is that the hangtag contains an RFID inlay.

To fulfill an order, an employee stands at a workbench and packs a cardboard box with ordered apparel, while a ThingMagic Astra reader mounted under the workbench reads each tag and triggers an audio count-off as the box is filled. For example, the worker might grab three articles of clothing from a bin and place them into the box. The software would immediately trigger an audible "three," and then, as he or she placed more items in the box, the audio would continue to count up ("four, five, six" and so on) to provide the employee with a running tally. If 16 pieces were placed in a case that was supposed to carry only 15, for instance, the software would instruct the worker to remove one item before sealing the box.


At another station, a staff member places the sealed case onto a platform with an RFID reader antenna mounted underneath. Once the interrogator reads all of the tags, it provides the worker with an audio confirmation that the correct quantity of items has been placed inside the box. The employee then touches the right side of the touch screen, which also displays the number of tags that the reader has read, for the benefit of workers who are not totally blind. Touching the screen triggers the Nox software to command the R110Xi4 RFID printer-encoder to generate an adhesive label that the worker then attaches to the case.

All tagged cases related to that specific order are placed on a palletizer, and an Astra reader mounted next to it collects the ID number encoded to each case's RFID tag, as stretch wrap secures the cases to the pallet. Once the pallet is wrapped, the printer-encoder generates a pallet label with an embedded RFID tag. Encoded to the tag is the pallet number, which is associated with the order information and all case tags on that particular pallet.

For Blind Industries and Services of Maryland, as well as the three other NIB-associated companies using the Nox system, SimplyRFID integrated the Nox software with the Wide-Area Workflow (WAWF) order-management software that the firms use to fulfill orders from the Department of Defense. The Nox software pulls order data from the WAWF and pushes confirmation of completed orders to the software, based on the RFID labels it generates.

"The SimplyRFID solution helps the Blind Industries and Services of Maryland ensure that the finished goods inventory is accurate," says Mike Sebach, the organization's operations manager. But more importantly, he notes, given the DLA's request that it and other manufacturers begin tagging at the item level, the system also ensures that Blind Industries and Services of Maryland can keep its important DOD contract.