Mar 03, 2011Tourists exploring the Italian Alps last summer at Parco Naturale Veglia-Devero (Veglia-Devero Nature Park) hiked the mountainous trails with an RFID reader in hand. The reserve, located along Italy's border with Switzerland, installed a series of RFID tags along approximately 2 kilometers (1.2 miles) of its trails. Each tag stores a unique identifier that links to data regarding a specific location, enabling a tourist to use the handheld device to access information about animals, plants and other aspects of the park's natural history. The solution was designed and installed by multimedia company Demetra, using RFID hardware provided by Italian value-added distributor Softwork, which also helped design the RFID functionality of software that links data from tags with specific media. 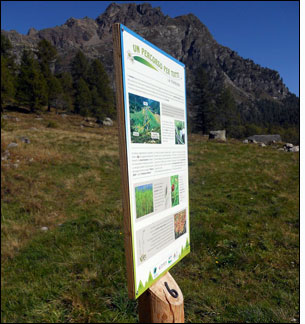 Demetra embedded RFID tags in 13 wooden posts, some of which supported informational signs.

The 8,500-hectare (21,000-acre) park, established in 1995, receives visits from 60,000 to 80,000 people annually. Some of those visitors have disabilities, such as hearing or visual impairments, so the park sought a system that would bring information to disabled individuals, as well as to the very young and elderly, who may have trouble reading signage, that would be easy to use and engaging for all visitors. "Our starting point was to look for a solution that was characterized by high automation," says Daniele Piazza, Veglia-Devero Nature Park's project manager and consultant.

The park considered several wireless options (including GPS solutions) to provide information to visitors without requiring signage or paper leaflets, but determined that RFID transmissions would be more reliable. When weighing automated versus non-automated options, it chose automation with RFID since that would require no action on the part of a visitor, such as pressing a touch screen or a button. What's more, the park found that RFID, with only a tag incorporated in a wooden post, would not interfere with the landscape's aesthetics.

The park installed the RFID-based guide system, known as Didà, for the summer season of 2010. The project was funded by Italy's Piedmont Region, as well as by Cariplo Foundation, a philanthropic organization that supports cultural, scientific and environmental projects. The tags were embedded in wooden posts along popular trails in July, where they remained until October, when the hiking season ends due to winter weather. In August, the park asked visitors to fill out a questionnaire describing their impressions of the system. "The impressions were quite favorable for the easy use of the system," Piazza says, "and also for the quality of multimedia contents."

The data that visitors can access includes descriptions of the types of trees and flowers in that area, as well as traits of the land formation and the history and legends associated with the local environment.

At 13 locations, Demetra installed a wooden post with an active i-B2 UHF (868 MHz) RFID tag from Identec Solutions embedded in it, says Gabriele Villa, Demetra's technical director. At 10 of those locations, the tag was linked to regarding points of interest in the vicinity of the post . At three separate locations, where trails divided, the tags were linked to data regarding what lay ahead on each trail. Every tag transmitted its ID number approximately once per second, with up to a 10-meter (33-foot) read range.


Visitors were provided with a handheld PDA fitted with an Identec Solutions i-Card CF-350 RFID reader. The park used a total of 10 handhelds, each containing videos, photographs and audio media provided by Demetra and linked, via Demetra's software, to each tag's ID number. Eachreader, upon coming within range of a marker tag on the trail, captured that tag's ID and began playing the visual and audio media related to that particular location, says Paola Visentin, Softwork's marketing and communication manager. The material was available in English, German and Italian. The handheld device itself, encased in a protective casing, could be carried in a person's hand, or worn around the neck on a lanyard. For those with mountain bikes, the handheld could be attached to a bracket on the bike itself. 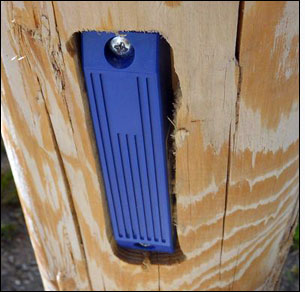 An Identec Solutions i-B2 RFID tag was screwed into a recess cut into each post.

The Demetra back-end RFID software enabled park employees to personalize each mobile device's language before handing it to a particular visitor, by plugging the reader into a PC loaded with that software and selecting one of the three available languages.

At the end of the visit, each hiker returned his or her handheld, which was again plugged into the PC to upload data regarding how that device was used—for example, which trails were visited (based on which tags were read) and which language was selected. A report about the media content could then be printed as a souvenir for the tourist, Villa explains.

In addition, Demetra installed panels along the path that released scents when touched—the smell of a larch or fir tree, yarrow or oregano, for instance.

The system was removed in October to protect the tags from winter weather, and is slated to be reinstalled in April of this year. "The whole area is covered by snow from October to April," Visentin states.

Demetra may design similar Didà systems in the future, Villa says, for use in other public applications, such as providing data to the visually or hearing impaired around hospitals, theaters, cinemas and restaurants. "The main aim of this project [whether in the park, or in other locations] is to help facilitate the daily loves of people with hearing and visual impairments," he explains.