This finding results from a two-year study conducted by two universities and eight biopharmaceutical companies, to test any adverse effects to protein in the products following 24 hours' exposure to 8 watts of RF transmission.

Mar 25, 2011A study conducted by researchers at the University of Florida and the University of South Florida Polytechnic, with assistance from Abbot Laboratories, has found that pharmaceutical products containing biologics (medicinal products created by biological processes), such as insulin and vaccines, were not adversely affected by 24-hour exposure to 8-watt RF signals, at frequencies typically employed by RFID readers and tags.

The project was led by Ismail Uysal, a professor at USFP's College of Technology and Innovation, and Jean-Pierre Emond, the dean of the College of Technology and Innovation. The researchers tested 100 biologic products manufactured by eight pharmaceutical companies, exposing those products to five different RF bands commonly used by RFID tags and readers: 13.56 MHz, 433 MHz, 868 MHz, 915 MHz and 2.4 GHz. 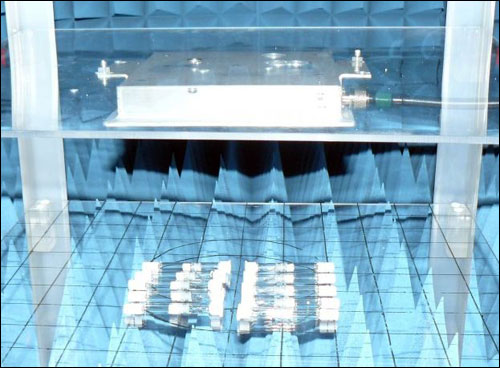 Inside the anechoic chamber, the researchers placed bottles of biologic product beneath an RF antenna.

The study found that none of the RF bands, in the form of 8-watt RF signals transmitted continuously over a 24-hour period by an antenna 24 centimeters (9.4 inches) away, had any impact on the products' protein structures. The researchers intend to present the study's results at RFID Journal LIVE! 2011, which will take place on Apr. 12-14, in Orlando, Fla. Uysal hopes that the U.S. Food and Drug Administration (FDA) will consider removing biologics from a list of "exceptions" regarding the use of RFID technology around pharmaceutical products.

The FDA's guidelines for the use of RFID, issued in 2004 and known as Compliance Policy Guides Section 400.210: Radiofrequency Identification Feasibility Studies and Pilot Programs for Drugs (see FDA Clears Way for RFID Tagging), excludes products containing biologics—such as blood, plasma or hormones—since, the Florida researchers say, sufficient testing had not yet been carried out to prove that non-thermal RF transmission (studying the radiation effects without concern for heat) does not harm the links binding proteins together. The BloodCenter of Wisconsin has completed two phases of research into the effects of RF transmission on red blood cells, platelets and plasma, but this research studied only the effects of 13.56 MHz transmissions (see Wisconsin Blood-Tracking Study Moves to Phase 2).

Researchers at the two Florida universities broadened the types of frequency bands tested on three categories of biologics products: vaccines, immunoglobulin (also known as antibodies) and hormones. The products were manufactured and supplied by Abbott Laboratories, as well as Amgen, EMD Serono, GlaxoSmithKline, Merck, Pfizer, Sanofi Pasteur and Schering-Plough (now owned by Merck). A total of 100 products were tested.


The scientists built an anechoic chamber that included interior walls lined with a solid, pyramidal shaped, carbon-loaded urethane foam absorber designed to prevent external ambient radio waves from entering the chamber. The chamber was set up at the University of Florida's cold room (to ensure that temperature-sensitive products did not become too warm during testing) operated by the school's Center for Food Distribution and Retailing.

Inside the chamber, researchers installed a table consisting of a pair of parallel RF-lucent shelves. On the top shelf, they placed an antenna cabled to high-power RF signal-generating hardware (consisting of function and signal generators) to emulate a typical RF reader signal, as well as RF power amplifiers, while the lower shelf was used to hold the biologic product. The antenna and product were spaced approximately 22 centimeters (8.7 inches) apart. Researchers boosted the power to 8 watts—the Federal Communications Commission (FCC) approves a maximum of 4 watts for RFID RF frequencies—to test the technology at a higher power rate than that used by typical applications. The RF hardware was then set to transmit at 8 watts for 24 hours at one of the five RF frequency bands, in order to create a "worst-case scenario," in terms of RF exposure.

For every product tested, the drug companies provided six samples—one for each of the five frequency bands, along with a sixth non-exposed sample to serve as a control. After the testing was completed, the products were then sent back to the pharmaceutical firms for analysis.

When the research group first presented preliminary details about its research last year—at IEEE RFID 2010, an event collocated at RFID Journal LIVE! 2010—only two pharmaceutical companies, contributing a total of 15 products for the study, had completed their own analyses of the biologic samples and provided their results, which the researchers then discussed with members of the FDA.

Since that time, all of the companies' results have come in. "There was no effect," Uysal says, indicating that none of the companies found any damage to protein structure in any of the 100 products studied.