The technology, developed at Penn State University, consists of a sensor array that can be applied to a substrate at low temperature and dissolve in warm water, along with an NFC or other wireless transmission module, to transmit data collected by sensors, such as temperature, heart rate or blood-oxygen levels.

Nov 27, 2020University researchers have developed a wearable sensor device that can be applied directly to an individual's skin in order to measure his or her conditions, including temperature, heart rate and blood-oxygen levels. The device is designed to be applied directly to a person's body like a temporary tattoo, and with a small wireless module leveraging Near Field Communication (NFC) RFID technology or inductive coupling, it can transmit data to a user's smartphone.

The  Penn State Department of Engineering Science and Mechanics developed the system under the leadership of Huanyu "Larry" Cheng, a Dorothy Quiggle assistant professor at the college. The wearable device consists of silver nanoparticle-based sensors and flexible printed circuit boards that can be bonded to the skin. The device can employ a battery to capture measurements, and it can store data and transmit that information to a smartphone. Alternatively, the system could be energized by the interrogation of the NFC-enabled device, in which case no battery would be required.

When a user is finished using the wearable device—for instance, after monitoring has been completed or after an illness has passed—he or she would simply remove the wireless module and related circuitry; the sensor array attached to the skin could then be dissolved in warm water and wash away. The benefit for patients and healthcare providers, if the solution were to be released commercially, could be an affordable system that could temporarily track an individual's vital signs without the burden of wired electronics. This could be used for diagnostic testing, recovery monitoring or workplace safety purposes.

Traditional wearable sensors are generally uncomfortable and inconvenient if wires are involved, according to Lisheng Gao, a research analyst at  Lux Research, an emerging technology research and consulting firm. Typically, a healthcare provider must attach such devices to a person's body, and they can be cumbersome to wear and maintain. "The very important part of this sensor device is reducing the discomfort and frustration of wearing a wired sensor," Gao explains. 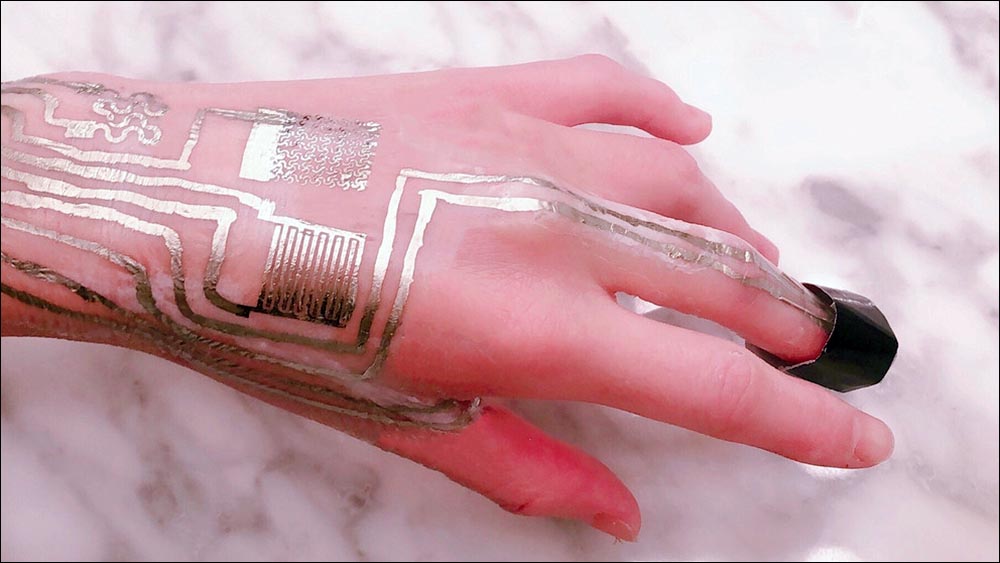 There are wearable sensors on the market that are wireless and employ flexible printed circuit boards for condition monitoring; however, these require fabrication processes, such as lithography or direct printing on a substrate, before they can be attached to the body. So in 2019, Penn State engineering students, along with Cheng, began developing a system that could be worn on the skin. The objective, he says, was "wearable sensors to collect vital information about an individual's health, enabling physicians to provide timely treatment that the patient needs."

What makes this new system unique, Cheng reports, is the way in which it is fabricated at low temperature, which enables its direct application to human skin. The fabrication system consists of metal nanoparticles acting as a sensor, sintered onto paper or fabric at low temperature for flexible PCBs, then directly sintered onto the skin using polyvinyl alcohol paste that can be disintegrated in warm water. Once commercialized, the sensor could be provided to users in a kit that might include multiple sensor stickers and a single wireless module that could be attached to a person's body. "We can encapsulate the circuits," he states, with built-in recyclable circuits, chips and antennas that could be reused with another wearable sensor.

The sensor is designed to be simple, Cheng says, and it could be placed over the skin to be "stamped on" like a sticker or a temporary tattoo. By making it easy to apply and remove, the researcher developed a system intended to allow patients or consumers to serve themselves, rather than requiring help from a physician. Users would typically wear the sensor for limited periods of time. With the sensor in place, they could bring their smartphone within a few centimeters of the sensor and the NFC could power the wireless module.

If an app were provided with the system, users could potentially determine where to store the sensor data (for instance, in the app itself), and to whom to send that information, via the mobile phone. The app could potentially schedule automatic interrogation, in which case the phone's NFC reader could send a signal periodically to the sensor's NFC tag. The tag would then capture the sensor data and transmit it back to the phone, along with its own unique ID number. Inductive coupling would be used similarly, though users would need to bring the handheld device within contact of the sensor's circuitry.

In addition, the NFC antenna—or an NFC-embedded textile—could be designed to extend read range from a few centimeters to 10 centimeters (4 inches) or more, enabling interrogation if the phone were, for instance, in the sensor wearer's pocket. Bluetooth modules could also be attached to the sensor, Cheng says, with the Bluetooth chip soldered to the sensor. The wearable devices could contain a single sensor for monitoring temperature levels, or they could be sold with multiple sensors built in. Cheng predicts the solution could detect health concerns—for example, indicating that a heart attack has occurred—even before a patient realizes this has happened.

In addition, the technology could benefit COVID-19 patients, Cheng says, while they recover at home, away from a doctor's immediate care. If an individual's condition worsens, the sensor could identify a sudden elevation in temperature or a drop in blood-oxygen level. "This kind of information is critical," he states, in caring for patients with the coronavirus.

To date, the researchers have tested a prototype in the lab, and they now seek technology partners to help market the solution. The team plans to proceed with animal and then human clinical studies, followed by commercialization. According to Cheng, the firm has already been in discussions with several such companies. The system has been piloted on students' hands, but it could be placed anywhere on a person's skin. The wearables would vary in size, depending on whether a single sensor was used or an array of sensors was utilized with different modalities. Lux Research finds the technology to be of value for commercial and healthcare requirements, Gao reports. " We think that's promising for technology for medical applications," he says.

The solution could be used not only for patients, but also for those in the workplace, such as employees in hazardous environments. "It is possible to have this attached directly to their skin, rather than having sensors attached to their clothing," Gao adds, though the impermanent nature of skin attachment could pose a problem in some environments. "One challenge could be how the sensors stay attached to the body in high-temperature environments" in which heat and perspiration could loosen the device. It will take time to get the technology to the market, he notes, adding, "Probably, there will be a minimum of five years. Our take is, we definitely see value in the technology. It will probably reshape what biosensor networks [look like] for medical purposes."