The Monza R6 can retune itself according to its environment and test the integrity of the EPC and TID numbers encoded to it, and features two copper pads to make antenna attachment easier and cheaper.

Apr 03, 2014As the use of RFID tags on an item-level basis in the retail market continues its upward trend, Impinj has developed a new chip intended to make such tags more sensitive than those employing other chip models, with a longer read range and three new features that promise to increase the yield of properly functioning tags during manufacturing and encoding processes.

The Monza R6 tag chip, says Nikhil Deulkar, Impinj's Monza product marketing director, is designed to drive high-volume applications in retail stores and supply chains. The new chip can be encoded at a rate of 32 bits per 1.6 milliseconds (32 bits is the most common length of data chunks used when encoding with the EPC Gen 2 Blockwrite command). When used in conjunction with Impinj's Source Tagging Platform, he says, the R6 supports the encoding of 9,500 tags per minute. The chip also accomplishes a 25 percent longer read range than existing RFID chips. This, the company claims, will improve the accuracy of inventory tracking, by ensuring that every tag is read through the supply chain or during inventory audits. 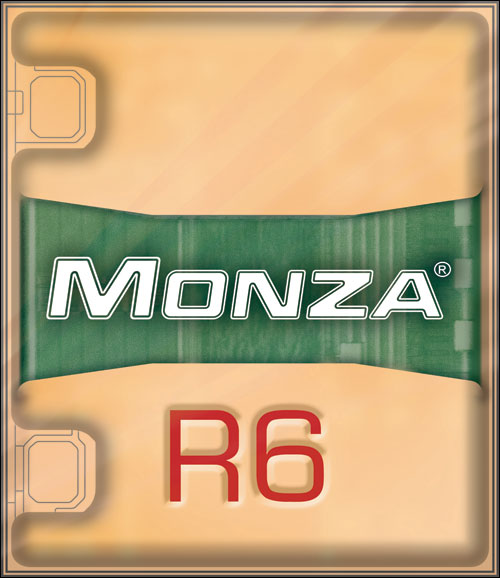 The Monza R6 chip comes with two wide copper pads (instead of the four pads commonly found on most other RFID ICs) to make antenna attachment easier and cheaper.

In addition to these improvements, Deulkar says, the chip also employs three functions that will benefit tag users, service bureaus and tag manufacturers. AutoTune technology allows a tag to tune its antenna automatically, according to its environment. The Integra technology suite of diagnostic tools enables encoders and users to identify a chip experiencing functionality problems that could lead to future inoperability. And Enduro technology consists of a different method for attaching a chip to an antenna that reduces the risk or errors, decreases pressure during the adhesive-curing process, and lowers the volume of adhesive material required to affix the chip to the antenna.

According to Deulkar, the chip's AutoTune functionality is intended to improve inlay responsiveness to reader interrogation, by retuning tag antennas to compensate for various conditions. For example, he says, a company may use an inlay that operates well on a pair of jeans, but that might not work at all on a product with a different stock-keeping unit (SKU), such as a handbag. Rather than possibly requiring a different tag for that specific SKU, the chip itself is designed to detect a change conditions and automatically retune the antenna every time a reader powers it.

AutoTune also enables a small inlay using the Monza R6 chip to operate within a wider bandwidth than existing similar-size tags. "Up until now, you could design a small tag for jewelry, for example," Deulkar states, but it would have a narrow bandwidth that might work well in North America, for instance, but not in Europe, where a different bandwidth is used.

Integra is a function for identifying the integrity of data encoded on a tag, Deulkar explains. While encoding a tag, service bureaus or end-user companies that print and encode their own tags could check the quality of the Electronic Product Code (EPC) encoding with a Margin Read function, and thereby identify a damaged chip before sending it to a customer. "Anyone, including the end user, can use a Gen 2-compliant custom Margin Read command on Monza R6 tags to explicitly check for the encoding margin," he says. This, he explains, allows the individual conducting the encoding to know whether the tag received adequate power during the encoding process to program the chip's memory, with sufficient margin to ensure the integrity of the data stored on it. A customer or user could also receive an alert regarding the integrity of bits of data within the transponder ID (TID), by verifying that TID's integrity via a "parity check" reader command at the point of encoding, or by having end users do so when reading the tag.

"It doesn't happen every day," Deulkar says, "but machines [that make or encode the tags] can damage the chips."

Finally, Enduro technology provides a new method for constructing RFID inlays. Most chips feature four bumps that protrude just far enough that adhesive can be applied to them and make contact with an antenna as the die is being placed in the inlay. The shortcoming, Impinj notes, is that the bumps create a stress factor during the encoding or printing of a label in which the chip is embedded, which could damage the chip. They can also fail to make contact with the antenna if the die is slightly misaligned as manufacturing occurs. With the Monza R6 chip, Impinj has replaced the four bumps that are present on most chips, including all of its previous Monza models, with two copper pads. The pads do not protrude enough to create stress concerns, Deulkar says, and because they are broader than the four bumps, a slight misalignment of the chip would not render the tag unusable. In addition, he says, less adhesive is required to secure the chip in place. Impinj developed the Enduro technology with consulting help and materials from RFID label printer Mühlbauer and adhesives company Delo Adhesives.

"The performance of the Monza R6 is unprecedented," Deulkar states. "What I think are the real game-changers are the three technology functions."

Several inlay manufacturers are currently testing sample versions of the chip, Deulkar says, which should be production-ready by July 2014, following additional intensive testing by Impinj. Inlays with the chip built in, therefore, will not appear on the market until the second half of this year. The cost of the chip will be comparable to those of Impinj's previous chips, he reports, though the additional chip functionality—such as faster encoding and increased yield due to fewer malfunctioning tags—will enable companies to sell their tags for less.