The volume knob, which can be retrofitted into the company's Mototrbo two-way radios, enables users to conduct inventory counts of 50 radios in six seconds, instead of four minutes.

Apr 23, 2014Two of Motorola Solutions' business divisions combined forces this year to develop an RFID-based solution known as RFID Fleet Management, for managing the locations of its Mototrbo two-way radios. The system features a volume-control knob with a built-in RFID tag, enabling users to locate radios more efficiently than having to manually search through several models, reading serial numbers or scanning bar codes. The solution also includes Motorola EPC Gen 2 ultrahigh-frequency (UHF) RFID readers. Software to manage read data, as well as training, support and service, are being provided by Motorola's reseller and solution-provider partners. Beginning at the end of this month, the new knobs will be shipped to customers, upon request, as a retrofit for their existing radios.

Motorola Solutions sells its Mototrbo two-way radios to customers, such as product manufacturers, and other companies with mobile personnel. Motorola Solutions' Mototrbo customers include organizations that rent the radios to the end users. Both types of companies can have inventories of hundreds or thousands of radios, which must be accounted for periodically—at the end of each day, weekly or monthly, for example—to confirm that the radios have not gone missing, and that every user returns the correct units. Without RFID, each radio assigned or rented out must have its bar code scanned or its serial number recorded in order to create a record of which radio was provided to which employee or company, and when this occurred. 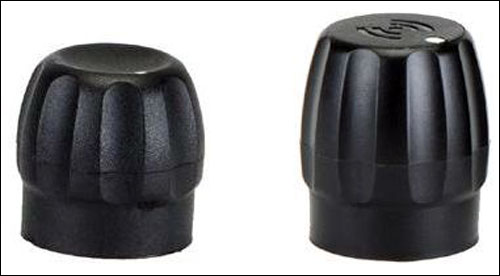 With the RFID Fleet Management solution, the radio's original volume control knob (left) is replaced with an RFID-tagged version (right).

According to Carrie Angelico, Motorola Solutions' senior channel business development manager for data-capture solutions, Mototrbo users told Motorola how exhaustive the inventory-management process could be, and the company's radio division began discussing a solution with its own RFID division. The result is a volume-control knob containing a Motorola UHF RFID Custom Tag, made with an Omni-ID tag, encoded with a unique ID number that can be associated with the radio's own serial number in the user's software.

The solution is designed to be a retrofit option for those with Mototrbo two-way radios. Users first acquire the RFID-enabled knob as a replacement for the existing volume knob. The knob's built-in RFID tag can then be read via any of Motorola Solutions' handheld or fixed readers, including a desktop interrogator that could be used for checking radios into and out of a storage area.

Motorola's reseller and solution partners can provide software that supports the use of RFID knobs to manage the radios. Conversely, Mototrbo users can employ their own existing software for managing radios.

The new knob is expected to be made commercially available at the end of this month, Angelico says, and is currently being piloted by businesses and agencies that adopt the RFID knobs to identify the locations of their radios during inventory checks. To date, these companies have reported that while it previously took four minutes to identify 50 radios being returned from workers, that same process can now be completed for the same number of radios in only six seconds. 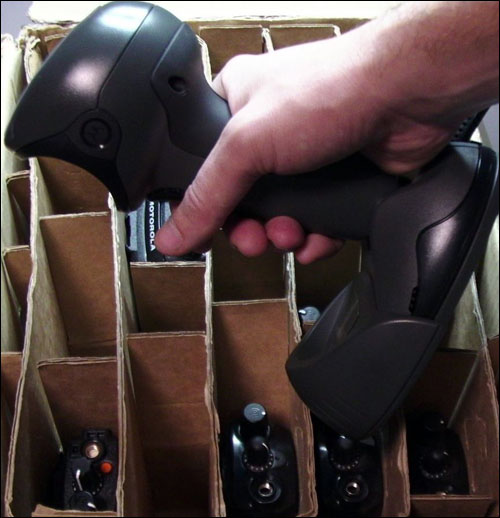 Once the RFID-tagged knobs are installed, a Motorola DS9808-R or other RFID reader can be used to quickly take inventory of Mototrbo radios packed in boxes.

Four companies that will be selling the solution with their own software are among those that have beta-tested the knobs, Motorola reports: CDO Technologies, RFTrail, Radiant RFID and PiiComm Mobility Solutions. Each firm has developed Mototrbo tracking solutions that employ Motorola RFID readers.

Angelico says there are hundreds of thousands of Motorola radios currently in use that could be retrofitted with this solution.