Nov 21, 2013A variety of companies, ranging from mines to bakeries, are currently trialing a new, low-cost Motorola Solutions EPC Gen 2 ultrahigh-frequency (UHF) RFID reader in the form of a sled that snaps onto a Motorola mobile computer with a built-in bar-code scanner. For Motorola Solutions, the RFD5500 sled reader—which fits onto the company's existing MC55, MC65 and MC67 family of handheld computers—represents the first new RFID-based product the firm has offered in many years.

The company's aim, says PV Subramanian, Motorola's senior manager of RFID product management, is to seed radio frequency identification in places in which the technology has not yet made headway—either due to cost constraints, or to businesses' reluctance to start using new hardware and a new software platform. 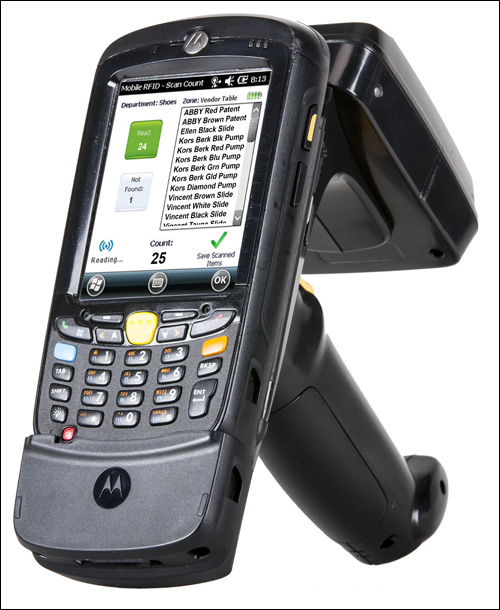 Motorola's mobile computers slide into the RFD5500 sleds, which then operate using RFID reading software provided by Motorola. The same handheld device can be employed as both a bar-code scanner and an RFID interrogator. In Geiger counter mode, for example, it can be carried through a room or stock aisle and identify RFID-tagged items within the area. It can also capture data regarding RFID-tagged goods, even if their bar-code labels are damaged or blocked.

According to Motorola, the solution represents a low-cost alternative to buying a new RFID handheld from the company, such as its MC3190-Z or MC9190-Z models. Motorola's handheld readers typically cost about twice the price of the new RFD5500 sled. Not only is it lower in cost, but it also enables companies to continue using their existing bar-code-based tracking systems with the added functionality of RFID, requiring very little staff retraining to operate.

More than one million Motorola MC 55, MC65 and MC67 mobile computers are already in use worldwide, enabling users to scan bar codes of goods for sale, as well as track assets. With the recent surge in item-level RFID-tagging in the retail sector, the company expected a large demand for sled readers for attachment to stores' existing handheld computers. However, Subramanian says, he has been surprised by the broad variety of use cases in which the sled is already being utilized. For instance, he notes, there is keen interest from firms using returnable transport items (RTI), such as totes or pallets. By employing RFID to track the reusable containers, a business can also track such details as deliveries or the locations of goods loaded in or on the containers.

For example, a large bakery company in the United States is presently testing the sleds attached to their existing MC55 devices, in order to determine whether they can obtain valuable information about the movements of their returnable plastic trays, both when being delivered full to customers and when being picked up empty.

Containers often end up missing in the baking industry, in which fast-paced deliveries are made each morning to everything from small delis to supermarkets, with quantities of trays ranging from one or two (for the smallest businesses) to hundreds daily (for the largest). Ensuring that every tray is accounted for is nearly impossible, Motorola explains. The large bakery, which has asked to remain unnamed, already had Motorola handheld computers, but found it too time-consuming to use them to scan each tray's bar code. Consequently, data about each tray was not available in real time. With the sled reader, drivers can now do much more. Upon delivering a stack of trays to a customer, a driver simply holds the reader in front of the stack, captures all unique ID numbers and then inputs data into the software, thereby indicating that the customer has received those trays. If a stack of empty trays is picked up, the driver can input that information directly into the handheld as well, after interrogating the tags.

In another use case, the sleds are helping an unnamed mining company in Asia to identify plastic containers loaded with tools and critical parts. The tools, contained in the boxes, were sometimes missing when needed, and the process of trying to locate the boxes on a large worksite was often laborious. With the RFD5500, personnel can now walk around a site and identify any missing RFID-tagged containers, and thus the tools stored within them. Alternatively, an individual borrowing tools can use the sled by reading a tool box's RFID tag and inputting his or her own information, to be stored in the management software. This allows the company to identify who has the tool, where that person has taken it and when this occurred.

In another use case, a Middle Eastern country is preparing to test the sleds with RFID-enabled vehicle-registration stickers. In this case, the government agency did not already have Motorola PDAs, but acquired the sleds and Motorola PDAs since that enabled workers to either carry the device with sled to read RFID tags, or to simply remove the PDA from the sled and use its built-in bar-code scanner when RFID reads were not required, thus making the tool less cumbersome to carry. 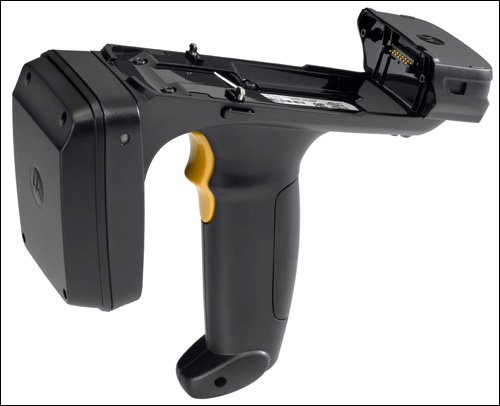 By inserting a Motorola MC55 mobile computer into the RFD5500 sled and installing the RFID software provided by Motorola, a user has a fully functioning handheld RFID reader.

The agency is supplying the devices to the police force for use in identifying cars that may be parked illegally. Each vehicle will be provided with a registration sticker that has a UHF RFID tag embedded in it, to be attached to the car's windshield. Upon approaching a parked car to determine whether it is parked legally, a police officer can read the sticker from a distance of 10 feet or more, and automatically view data about that vehicle and its owner. If the car is being issued a ticket, personnel can then easily input that information into the handheld device and create an automatic record of which vehicle has been ticketed, and why.

The RFD5500 is commercially available now, along with software to operate it with MC55 mobile computers. Software enabling the sled to work with the MC65 model is slated for release next month, while software for the MC67 will be available in January 2014.

The release of the new RFID product, Subramanian says, signals that Motorola believes "Significant RFID growth is ahead of us."

For bar-code-scanning customers, he adds, "Now, stepping into RFID will be easier, and there won't be the need for retraining of staff to use these devices."