The airport plans to install the RFID system in two phases over the next three months, with its current bar-code system running simultaneously as a backup.

Aug 03, 2007Next month, Milan's Malpensa Airport will begin installing an RFID system to track baggage, as part of an effort to reduce the cost of baggage handling at one of Italy's largest airports. Malpensa signed a contract with Denmark's Lyngsoe Systems to install and integrate a system in Milan that is nearly identical to one used at Hong Kong International Airport (see Airport Says Payback Is in the Bag). The Milan airport served 21.7 million passengers in 2006.

Jan Poulsen, a sales manager for airport solutions at Lyngsoe, who is working with the Milan airport, says, "This is the first RFID baggage-handling system for commercial use to be installed in Europe. Up until now, there have only been pilots." 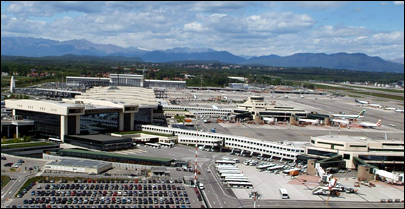 To reduce the cost of baggage handling, Malpensa Airport will install an RFID system to track bags.

Like most airports around the world, Malpensa Airport currently operates a baggage-handling system that uses luggage tags printed with bar codes to identify bags, but because bar-code scanners require a clear line of sight to read a bar-coded luggage tag, the successful read rate is below 100 percent. At present, when a bar code cannot be read, workers must manually scan the bag's tag.

The airport plans to install the RFID system in two phases over the next three months, leaving the bar-code system in place and running simultaneously as a backup. Ten RFID antennas will be installed over conveyor belts at the entrances to the central baggage room, in which all conveyor belts converge in two lines. After bags are tagged at the check-in counter, the belts will move them to the central baggage room, where the first RFID interrogation will be made. Bar codes will continue to be read at this point as well.

The second RFID tag reading will occur when the bags are loaded into unit load devices (ULDs), the carts used to haul luggage to an aircraft. RFID antennas will be installed on the ceiling over four load points where baggage handlers manually lift bags off the conveyor belts onto ULDs.


Stefano Dolci, Malpensa's manager of baggage handling, says this part of the application differs from that used in Hong Kong, since it serves as a sort of "picking" system like those used in logistics. In Milan, workers will pick a bag when a green light tells them to unload it. ULDs assigned to a particular flight must be manually identified in the system, which will then identify the bags as they move on the carousel, using information collected via RFID. When a bag arrives in front of the correct ULD, the green light will signal workers to place it on the cart. In Hong Kong, the system only tells workers if a bag's tag has been successfully read.

This final RFID reading of the bag also supplies the baggage-handling system with information needed to perform baggage reconciliation—the process of confirming that all passengers accompany their own luggage on a plane, in an effort to increase security.

"If this system works as we expect it to, we will install it at all carousels," says Dolci, referring to carousels inside the baggage-handling room where ULDs are loaded, "and the RFID system will be connected to the actual BRS [baggage reconciliation system], so that a wireless scanner could be used to read a bar code on a load manifest that has been printed out and attached to the ULD."

During the first phase of the project, which will last roughly three months, RFID and bar-code printers will be installed at three check-in counters, RFID interrogators will be installed at the two read points and the system's software will be integrated into the airport's existing baggage-handling software. In January, when the first phase of implementation is complete, an RFID/bar-code printer-encoder will be installed at every check-in counter in Terminal 2, then in Terminal 1 as well. Suppliers for the EPC Gen 2 UHF tags and readers to be used in the deployment have not yet been selected.

"We decided to have a 'real' implementation, rather than a test," says Dolci. "We want to connect the RFID system with the PLC [the programmable logic controller that performs such operations as starting and stopping the carousels and baggage belts] so we will really use RFID for sorting the bags. This is the big difference between our installation and other baggage-handling RFID pilots in Europe."

Down the road, the Milan airport plans to extend its RFID system, enabling it to improve baggage tracking and write additional information to the tag. For instance, Dolci says, after a bag has been X-rayed and undergone some other security check, RFID antennas could write the bag's security status to the tag.