Museum of London has installed NFC RFID tags in its two locations, to provide the growing number of NFC-enabled phone users with additional exhibit information, access to social Web sites and vouchers.

Aug 16, 2011The Museum of London, together with Nokia, began testing a system last Friday using Near Field Communication (NFC) RFID tags at its two facilities to provide vouchers, exhibit information, reservations and other data to users with NFC enabled phones. Thus far the there are few NFC-enabled phones on the market in the United Kingdom and only a small percentage of mobile phone users have the product. (Makers of NFC-enabled phones include Nokia, which offers the 6131 and C7, as well as Nexus, Samsung, Sagem and LG). However, the NFC phone market is likely to grow, the museum management is wagering—as the technology becomes available in more phones, and the applications for NFC grow—and therefore it hopes to be an early adopter of a new technology that could become ubiquitous for mobile phone users.

The Museum of London consists of one museum of the same name, as well as the Museum of London Docklands, both owned by a charitable institution funded by a variety of organizations, including the City of London. The two museums, which focus on the city's history, have installed (altogether) about 90 tags that are located in highly visible areas where users can access them for more information or special services.

Since the tags were mounted on walls throughout the buildings Friday, they haven't had much use, says the Museum of London's marketing manager, Vicky Lee. Although she and her fellow staff members carrying NFC-enabled phones, she acknowledges that most of the public does not. "The point for us was to trial this as an emerging technology. We're not expecting heavy use initially, we expect this [project] to be a slow burner." She adds that the museum "likes to work with new technologies and we focus on social media and the latest things available."

At the front desk of both museums, visitors will now see an NFC label, the Trikker-UL CL42 (made with an NXP Semiconductors Mifare Ultralight RFID chip), provided by Nokia (which also provided the installation). The RFID label is attached to a colorful placard indicating that by tapping an NFC-enabled phone against the tag, visitors will be able to join the museum's "Friends Scheme." The scheme provides the user with access to special events, unlimited free entry to special exhibits, a Friends museum magazine and 20 percent discount in the gift shop. Visitors who place an NFC-enabled phone within about four centimeters or less of a tag received the unique ID number on the tag. Using an application on the Nokia phone, the phone then accesses the museum server to connect (based on the ID number on the tag) with the Friends of the Museum of London site, where they can purchase the annual service. 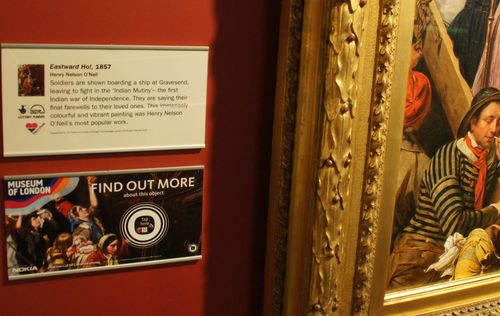 By tapping a phone next to this tag, visitors can access additional information about this O'Neil painting and the subject it depicts.
Once inside the museum, tags are used for a variety of other purposes. For example, one tag allows users to download a voucher for discounts at the museum shop. Another tag links users to a museum server site where they can purchase special exhibit tickets beginning in December, in time for opening of the Museum of London's "Dickens and London" exhibit, celebrating the 200th anniversary of author Charles Dickens' birth.

Both museums have placed other tags near exhibits where visitors can obtain more content about them, such as the Lord Mayor's Coach, an 18th-century gilded carriage, one of the Museum of London's more popular attractions. By tapping the phone next to the tags, users can access exhibit-related information that is not printed on signs in the museum, as well as additional photos.

The system also is intended to link users to social media sites. For example, when tapping the phone by some tags, visitors can automatically be routed to the museum's Facebook page, where they can "like" the exhibit, or its Twitter page. Other tags let visitors use their phones to view photos of art objects or artifacts in the museums' archives. 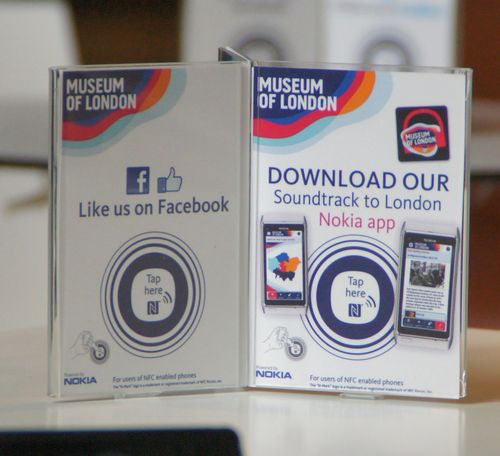 The museums worked closely with Nokia to develop the information to be provided via the tags, says Lee, and she adds that she believes this to be Nokia's first launch of an NFC-enabled system to be used with its phones. (Another system, provided by the Centre Pompidou in Paris, uses NFC-enabled Sagem phones provided to teenage visitors on-loan (see Centre Pompidou Hopes NFC Will Draw Teens to Art). Once other phone manufacturers develop NFC-enabled phones, those too will work with the museum's existing system, Lee says.

Currently, says Lee, the museum considers the installation a trial, and it will continue to test the popularity and effectiveness of the system for at least one year. "It's quite exciting for us," she says, adding that the museum will consider other opportunities for use of the technology in the future, such as mobile wallet systems although there are no specific plans for such an application.