SC Freda is attaching EPC Gen 2 tags to each item it makes, and monitoring the status of its products as they move into storage and onto trucks, thereby improving efficiency in warehouse management, shipping and production.

Nov 03, 2010SC Freda, one of Lithuania's largest furniture manufacturers, produces wood furniture such as tables, dressers and cabinets for living rooms and bedrooms. For the past three years, the firm has sold its products exclusively to IKEA, to be sold in the retailer's stores worldwide. The company ships an average of 10,000 pallets loaded with furniture every month, with 800 items loaded onto a total of 15 to 20 trucks on any given day.

In August 2010, SC Freda began employing radio frequency identification to track furniture destined for IKEA, with the goal of reducing shipping errors and labor costs as workers moved the products into a warehouse and then onto trucks. But beyond warehouse accuracy and labor reduction, the company hoped to achieve benefits in production efficiency as well. 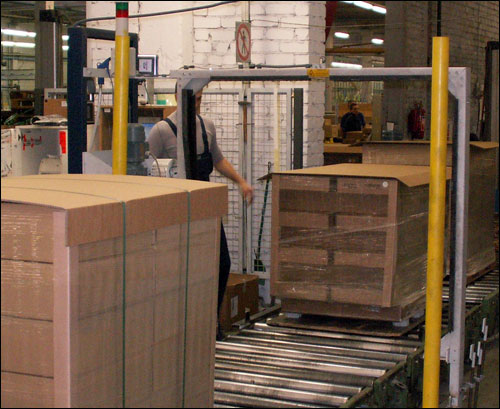 After a piece of furniture is manufactured, a worker attaches an EPC Gen 2 tag to its outer layer of stretch wrap, and the item passes through an RFID portal.

The RFID system, provided by Lithuanian integrator Autepra, also enables the firm's management to track when items are produced and shipped out, and to thereby know when a specific type of product needs to be manufactured. That is a critical benefit, says Virginijus Brundza, SC Freda's production manager, since the warehouse is relatively small, and the company wants to ensure not only that it has sufficient finished products on hand to fill orders, but also that it does not produce excess items that need to be stored on site. The system consists of EPC Gen 2 passive RFID tags (attached to stretch wrap surrounding each item), a reader at the point of tagging those goods, a portal reader at the loading dock, and a forklift with an on-board computer so that the forklift operator, while loading a truck, can view order updates, based on RFID reads. Proringas, which provided SC Freda's existing Pragma enterprise resource planning (ERP) system, contributed software to manage RFID data, and integrated it with the firm's back-end system. 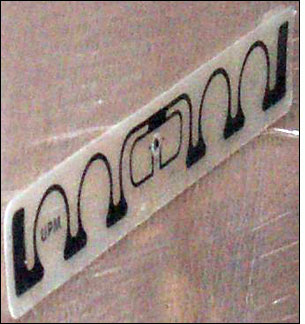 Each piece of furntiture is fitted with a UPM Raflatac EPC Gen 2 RFID tag.

SC Freda manufactures and stores the furniture at its facility in Kaunas, though some of the furniture is sent to an off-site distribution center, also owned by SC Freda. At the manufacturing site, after products are loaded onto pallets and wrapped in plastic stretch film, the items are then transported to a warehouse in the same building, to await pick-up by third-party transportation companies to various IKEA locations, or to SC Freda's off-site DC. Prior to adopting the RFID system, employees had been attaching a green sticker to the plastic wrap of each piece of furniture entering the warehouse. Later, when the furniture was being loaded onto a truck for shipment to IKEA, the workers removed and counted the stickers. In this way, the stickers helped the production department monitor the amount of furniture produced and stored each day, as well as determine what additional furniture needed to be manufactured, and when. Such a manual counting process, however, was time-consuming and prone to human error.

In addition, there was the potential for shipping mistakes, such as the incorrect quantity of products being sent to a particular location. When an error occurs, Brundza says, SC Freda receives an invoice for the cost of reshipping the necessary product. With the new system, he hopes to reduce the number of man-hours spent counting the items produced each day, as well as tracking which goods are loaded onto which trucks. What's more, he hopes to reduce the rate of errors.


With the RFID system, says Tomas Girdzevicius, Autepra's director, soon after a piece of furniture is manufactured, it is placed on a pallet and covered in plastic film, and an adhesive UPM Raflatac EPC Gen 2 tag is applied to the outer layer of stretch wrap. The item then moves down a conveyor, passing an RFID portal with a CAEN RFID reader that encodes the tag with data regarding the type of furniture, along with a time and date stamp. The tagged furniture is then removed from the conveyor and transported approximately 15 feet to the warehouse, via forklift. Because every item removed from the conveyor is immediately moved to the warehouse, there is no need to read the tags as they enter that location. Instead, software stores the date and time at which the tag was encoded, and the item is thus assumed to be stored in the warehouse.

When an order is received for a particular store, the forklift operator can view that order on the screen of his vehicle's on-board computer. The 10-inch screen displays a list of all items required to fill that order. The operator then picks up each item on the list and brings it to a waiting truck. As the forklift passes through a loading dock's RFID portal, a CAEN A948 reader captures the tag's unique ID number and furniture description, and compares it against the order to be filled in Freda's ERP system. 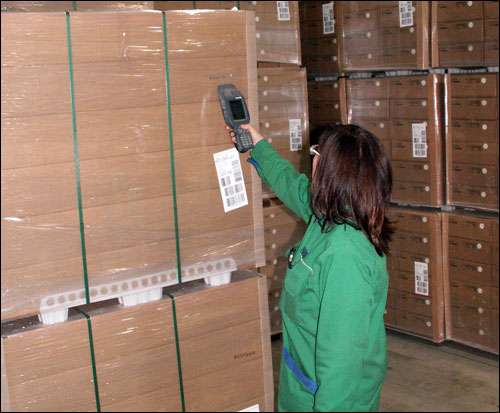 If specific pieces of furniture need to be located in the warehouse, staff members use a Nordic ID PL3000 handheld computer with a built-in RFID reader to identify those items.

The Pragma software then sends an update of the shipment's status to the forklift computer, and the forklift's screen displays the item that has been loaded in green, or issues an alert if an incorrect item is being put into the truck. "In that way," Brundza says, "mistakes are quite easy to handle" since they are caught before the truck is loaded. Once a truck is fully loaded, the forklift's computer sends the operator a confirmation, and the truck departs for the intended IKEA store. When the vehicle arrives at its destination and is unloaded, however, IKEA personnel do not read the furniture's' RFID tags; instead, Brundza explains, they scan the bar-coded labels that SC Freda also attaches to each item.

The Pragma software also catches problems with the RFID system in the event that a tag is not being properly read. The forklift itself has an EPC Gen 2 RFID tag on it, so the portal identifies it as it passes by, and the system supposes that the forklift should be transporting a piece of furniture with an RFID tag each time it drives through the portal to a waiting truck. If no tag is read, the system sends an alert to the forklift driver. If the driver is not carrying a pallet, he can then override the alert—but if he is carrying a pallet, he is alerted to the fact that the tag is not being read properly. The staff can then work to rectify the problem, so that the ID number of that particular item's tag can be determined, and thus be recorded in the back-end system as having been loaded onto the truck.


If a specific piece of furniture need to be located in the warehouse, a worker can utilize a Nordic ID PL3000 handheld computer with a built-in RFID interrogator to identify that item based on the ID number encoded to its tag.

Since the system's installation, SC Freda's production department has been using it to view the number of items shipped, and to then schedule manufacturing accordingly. The software also issues an alert to the department if the quantity of a specific style of furniture has reached a minimum acceptable inventory quantity. 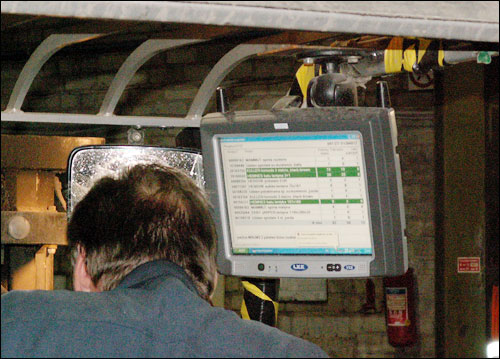 The greatest challenge during this deployment, Brundza says, has involved ensuring that only the RFID tags of items passing through the loading dock's portal are read. The warehouse is relatively small—about 800 square meters (8,611 square feet)—and some pallets pass within several feet of the portal without actually moving through it. To resolve this problem, Girdzevicius says, Autepra installed RF shields that would reduce transmission length into the warehouse itself.

In the future, Brundza says he hopes his company can begin tagging raw materials as they arrive at the facility, in order to track them as they are stored and then used in the manufacture of furniture.