Two beacon companies have developed unique solutions to help libraries send data about their programs or other details to patrons who download an app and then pass a library's beacons.

Dec 15, 2014Several libraries in the United States have begun deploying Bluetooth Low Energy (BLE) beacons to be used with an app to reach out to patrons. Many libraries are already using passive radio frequency identification technology to automate the checking out and returning of books, but BLE technology offers libraries a new wireless tool.

Capturing the attention of a distractible public is a growing challenge for libraries that have historically been known as a quiet institute rich with books and media, but not much beyond that. Nowadays, people young and old, whether or not they are library users, have become increasingly focused on their smartphones, which makes them much harder to engage. 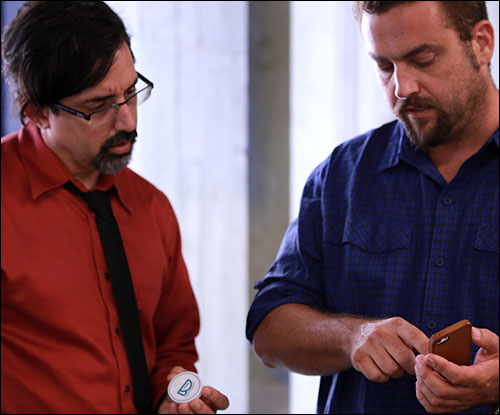 This is a problem that two companies are attempting to resolve with two different solutions. Long Island BLE firm Capira Technologies, founded by former library employees, offers a solution that can be integrated with a library's own existing management software. Patrons who install their local library's app on their Apple smartphone (and provide their personal data) can receive updates about their account status, or the availability of a book for which they are waiting, as they pass beacons installed at that library. The app also provides information about events taking place at the library, notices regarding which items (such as new releases) are shelved in a specific section, and alerts to staff members if a patron has remained in a specific area for a long time without moving, possibly indicating a need for assistance. Florida technology company BluuBeam is marketing a beacon solution that could be used at both libraries and other venues, such as zoos, museums or theaters, and provides details about upcoming programs, services and promotions, while the app users remain anonymous.

Orange County Library, in Orlando, Fla., went live with the BluuBeam system on Nov. 1, and is building its list of patron app users as they become aware the system is available, says Debbie Moss, Orange County Library's assistant director. The challenges of trying to attract the attention of both library users and non-users, Moss explains, had drawn the library to this solution—which she says the facility bought outright at a low price. The library hopes to attract the same kinds of individuals who visit local theaters and museums, she adds, and if the BluuBeam app is used at those venues as well, it could potentially draw people who do not usually visit the library.

For instance, anyone who downloaded the BluuBeam app from the Google Play or iTunes website and installed it on their Android or iOS device can receive data related to a beacon transmission from the library, even if they have not been to the library before. In that way, as they walk past the building, they could learn about upcoming events scheduled to occur there. "A lot of people who use other venues, such as museums and theaters, don't think of libraries as having similar programs," Moss says. In fact, she notes, the Orange County Library offers music performances ranging from solo artists to a "battle of the bands," as well as a variety of programs, such as cooking workshops in which local chefs provide their expertise.

The Orlando Orange County library has installed 12 beacons throughout its main branch, enabling it to do such things as provide information related to those cooking workshop to individuals in the cookbook section, or information about online streaming and downloadable music to those in the music CD section. It also installed three beacons at each of its two smaller branches.

According to Moss, library employees tested the app and beacons for about a month before launching the system for the public in early November. At first, she says, the various department managers were uncertain about the technology's value. But since that time, she adds, "They've come up with some really creative ideas" related to content that could be provided in their own departments. The challenge for the library now is to get the word out to patrons.

Chris Zabaleta, BluuBeam's founder, reports that approximately 30 libraries are currently using his company's system, which became commercially available six months ago. BluuBeam's Admin Console cloud-based software—which the library can use to gain analytics about patron movements, as well as to input or change data that visitors see on the BluuBeam app installed on their mobile device—is designed to be easy to install by the library, and not be integrated with library-management software. "We don't tie into [library] user accounts," he says, so the solution is entirely anonymous to use. The company sells a license for use of the BluuBeam app; within the next 30 to 60 days, the license will also include Admin Console. BluuBeam's battery-powered beacons, which the firm also calls Beams, are manufactured byAccent Advanced Systems, based in Spain.

Zabaleta says the company is presently in discussions with several museums, zoos and other venues, and adds that his vision is the kind of community-wide app that Moss hopes to see as well. In this way, a patron could download the BluuBeam app and use it at a variety of locations.

Capira Technologies' CapiraMobile app is focused on libraries alone, and is intended to be integrated with an organization's existing library-management software. Each library can customize the CapiraMobile app for its facilities, and then post it on the iTunes, Google Play or Amazon App Store websites, where that library's patrons can then download it. More than 100 libraries are using the CapiraMobile app without beacon technology. For deployments that do not involve beacons, patrons can still utilize the app to search the library catalog, request items or register for events. To date, only two libraries are in the process of adopting the beacon functionality: New Jersey's Somerset County Library System and New York's Half Hollow Hills Community Library. However, says Michael Berse, one of Capira's co-founders, some of the 100 or so other libraries using the app have inquired about adding beacon functionality to the CapiraMobile app at their branches.

Half Hollow Hills Community Library, which operates branches in Dix Hills and Melville, is initially installing the CapiraMobile App solution at its Dix Hill site, with three beacons (to go live in early 2015); one by the circulation desk, another in the children's reading area and a third by Adult Services. "We're starting very small," says Ellen Druda, the library's digital project coordinator for Internet services. "If all goes well, we'd like to add more and include Melville." She says the library hopes to provide "a friendly, non-intrusive experience for our library users that will enhance their visit."

Patrons will be able to download the app from iTunes, Druda says, adding that a version for Android devices will also be available via the Google Play website. The app will offer patrons the choice to dismiss or accept a request to allow the system to operate on their phone when they enter the library. If they agree to use the app's location-based functionality, they can receive an alert at the circulation desk about any item being held for them, or if their library card needs updating. At the Children's Services desk, they could receive an alert regarding the starting of story time, while at the Adult Services desk, they could learn about a special exhibit or a music program starting. In addition, visitors can learn of items ready for pickup, fines owed, expired library cards or overdue items. The Capira software will pull this information from the library's existing management software, provided by Innovation Interfaces Inc.

Personalizing the Capira software in this way offers several benefits, Berse says. Not only can it send visitors updates about their account status, but it also allows libraries to create targeted messages based on a particular patron's age or stated interests. For instance, as an individual enters the teen section, the system can determine if he or she is a teenager, and send content that would interest that person, such as the schedule for the Xbox Game Time. The app could also provide information about upcoming events, based on the ID number that a beacon transmits to the app user's phone.

The Capira software tracks the movements of patrons, as well as the length of time they spend at specific locations, anonymously, Berse says. In that way, management knows how many people pause at certain areas, but not their identities.

The Capira app that patrons install on their smartphones and tablets currently works on both iOS and Android devices. Beacon functionality, however, is available only for the iOS-based app, though Capira expects to add beacon support to the Android app in January. Capira uses beacons supplied by Estimote. Capira Technologies ships the beacons to libraries, and each beacon can be linked to information provided by library related to the location where that beacon is to be installed. Librarians then typically install the beacons themselves and manage any information updates. Libraries can use data collected from the apps, based on beacon transmission receipt from smartphones, to learn more about how patrons are using their facilities, by tracking visitor traffic patterns, such as which sections individuals are visiting, and for how long.